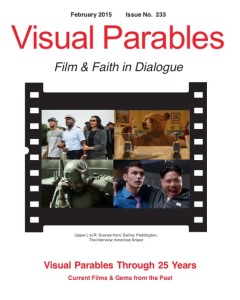 The new issue of Visual Parables journal contains a special section celebrating its 25th year of reviewing films. There is a brief history of the magazine and several excerpts from back issues—indeed the entire 2 pages of the first issue are reprinted, along with a listing of all of VP’s Top Ten Films through the years, and an article, “Films For Lent.” There is also a reprint of the best of the many film guides, Schindler’s List, organized in three parts around Psalm 22.

In Feb. 1990 while I was serving a church in Dayton, Ohio, I started a one-sheet newsletter with reviews of four films. This has evolved over the years from a newsletter to a digest and then full size print magazine, and lastly, into an on-line monthly journal. Most reviews in the journal include sets of questions for reflection and/or discussion. Now is a good time to consider offering meaningful support to the site by subscribing. If you are like hundreds of folks, you have read and used some of the free reviews, but have yet to help keep the site going. (I sound like one of those pleading for support for a local Public Radio or Television station, don’t I?)

The current issue also includes reviews of recent films—Selma, Paddington, The Interview, and others—plus a column for preachers linking a lectionary lesson to a film, and also Doug Sweet’s column keeping us abreast of new books and forthcoming DVDs.

Please join the celebration by becoming an active supporter.