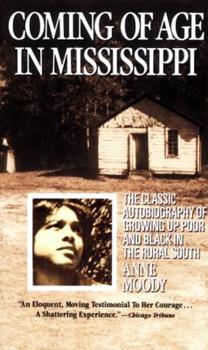 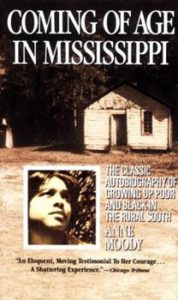 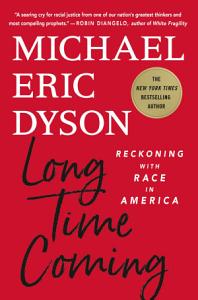 I have just finished reading 2 books that expose the poison of racism, one very  graphically, and the other in the lofty prose of the essay (but just as forcefully)–COMING OF AGE IN MISSISSIPPI and LONG TIME COMING: Reckoning with Race in America. Both are authored by Black persons, the first written by activist Ann Moody over 50 years ago, and the other by professor & frequent cable TV guest Michael Eric Dyson. Dyson’s I picked up at our local library, and this led me to my own library where Moody’s book has  remained as one of those books I’ll get “round to one of these days.”

Dyson’s book, the title of which is based on Sam Cooke’s great song,  consists of a  series of letters that he addresses to the Black victims of racist cops–all that is, but three who died at other white hands.  Elijah, McClain, Emit Till, Eric Garner, Breonna Taylor, Hadiya Pendleton, Sandra Bland,Rev. Clementa Pinckney. Most of these you will recognize from the headlines, and he mentions even more in the text of each chapter. I was very interested in his concept of “white comfort,” which he claims is what in the days of the Civil Rights Movement white liberals sought so that we could feel good about ourselves. His elaboration of this reminded me of Dietrich Bonhoeffer’s discussion of “cheap grace” as finding acceptance without admitting any guilt. Whites prefer not to admit they have been privileged by their white skin, and so can look at slavery from the distance of a century and more, claiming that they did not own slaves or profit from it. There’s lot more in the author’s nuanced argument, and so I urge you to read this fine book for the details.

Ann Moody’s book is a fascinating account of her life, from her birth in a small Mississippi town where whites could easily get away with murdering a black man–she describes the burning of an entire Black family in their home, with no repercussions–to her hardscrabble life as a child and her broken family to her college years at Tougaloo College near Jackson where she became involved in the Civil Rights Movement. I was hoping, when she described the beginning of the Mississippi Freedom Project, she would expand my knowledge of it, since my own involvement was at a most lower level than hers and was confined to just a small area up in the Delta. She does chronicle her many experiences  as a  SNCC worker in 1963 (the year before Freedom Summer), but she ends the book with the commencement of the Project.

One person that each book honors piqued my interest, Fannie Lou Hamer, a dynamic woman whom I had met three times during my stint in Mississippi. 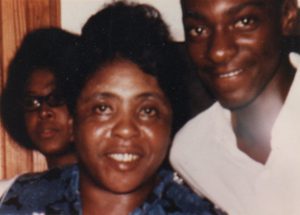 Mrs. Hamer was an untutored but eloquent sharecropper who became active in the Movement for voting rights and paid a heavy price. Loss of her home when her boss found out she had registered to vote, as well as the loss of her bodily comfort and health hen as she was brutally beaten during an trespassing arrest–she and some fellow activists had tried to use the white bathroom at a bus station. She became famous when she testified on TV at the Credentials Comm. of the Democratic Party Convention in Atlantic City

I first heard her speak when a group of us activists stationed at Shaw traveled the 10 miles north to Cleveland, the county seat of Bolivar County. The rally, as usual began with singing, with Mrs. Hamer leading it. What a great voice! Later I learned that she often was a part of the Freedom Singers, two of whose albums I still treasure. Her speech was that of a rural Miss. Black woman, but as eloquent as any college graduate in  creating a memorable. After a litany of ‘Mr. Charlies'” wrongs, she cried out the words that were to become famous when testifying on national TV, “I’m sick and tired of being sick and tired!” 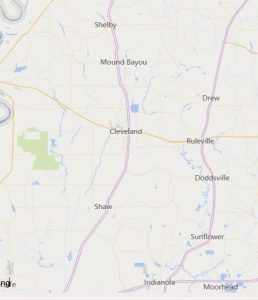 We were eager to bring her to Shaw to stir up the adults, and she readily agreed. That night the local policeman stationed across the street from the church hosting our Freedom Rally no doubt made a note that an “outsider” had come to town, She gave essentially the same speech that we had heard up in Cleveland, starting with her own story of how she got started in the Freedom Movement in 1962 while working on a plantation.  Urged by her minister, she and 17 others hired a bus to take them to Indianola to register to vote.  They were greeted at the courthouse by a large group of policemen, local and state.  Her contempt for them could be heard when she declared, “Any man In Miss. who can carry a gun and wear khaki pants and his white can be a policeman.”The police stooped them  on the way back , and the driver was charged with driving a bus of the wrong color.

When the owner of the plantation demanded she go back and withdraw her name from the registration list, she replied, “Mr. Marlowe, I didn’t go to register for you but for myself. Thy were fired, and so she moved in with a friend in Ruleville. Their house was fired into at night. When she went to pay the water bill, she was charged for 9000 gallons of water, though there was no tub or shower in the house. There’s more, but if you are interested, you can hear more about her terrible treatment in jail, and more, on YouTube, the link being at the end of this blog.

I ‘ll just briefly describe the 3rd book in the title, one that I came across while browsing through a second-had bookstore, THIS LITTLE LIGHT OF MINE: THE Life of Fannie Lou Hammer by Kay Mills. Illustrated with a center section of photos, Fannie Lou’s full story is beautifully told, leaving you with a sense of wonder at how much a person of low social standing and education can suffer and yet make a lasting impact on the world. 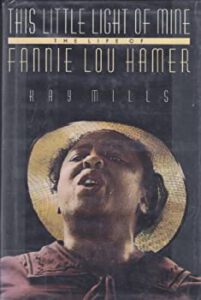 This is where YouTube comes in, like my finding this book, it was serendipitous. I was looking for something else when I saw this interview with author Kay Mills, which someone posted on YouTube.  You may not be able to read the book, but you can get the heart of it by listening to Kay Mills describe it and how she came to write the book.

Before closing, let me describe the 3rd time I met Fannie Lou Hamer. My fellow minister from N.D., Roger Smith and I were among the party of three that drove Mrs. Hamer home the night that she spoke to us in Shaw. We had a lively conversation about the Movement and such. Before leaving us she extended us an invitation to come to Ruleville the next week for the celebration of the 2nd year anniversary of the Freedom Movement in the town. SNCC Worker Charles McClaurin was being honored, and there would be lots of food and songs. And so we did, thoroughly enjoying the time. In the pictures below are Mr. McLaurin, and one with myself and fellow activist from Shaw Judy York chatting with Mrs. Hamer. In case you wonder why there is a dirty smudge over the church door, that is from the attempt of night terrorists to burn down the church–over 50 Black churches were burnt to the ground that summer, giving a new meaning to the title, “The Long Hot Summer”! 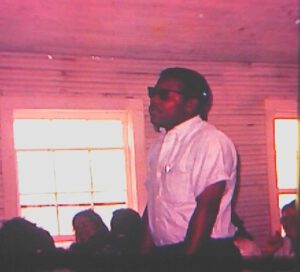 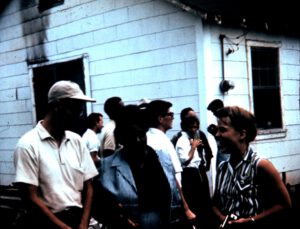 We were also witness to a daylight act of intimidation. Cars drive by whites kept slowing down so the drivers could gawk at the unusual sight of Black and white people eating together and enjoying themselves. One of those cars stopped. It was the sheriff, there to serve papers on Fannie Lou Hamer telling her she should not be running for the office of the US Senate on the Freedom Democratic Party label. Mrs. Hamer was scheduled to as a part of the Miss. Democratic  Freedom Party to the Democratic Convention in Atlantic City late in the summer. In the picture below you can see the white-hatted Sheriff, Fannie Lou, and Charles McLaurin. (I was afraid to go any closer or move to obtain a better shot.) 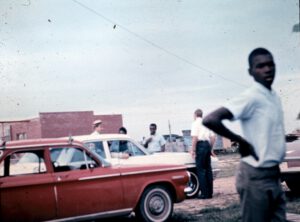 After the Sheriff left, and the papers were passed around to all who wanted to see them,  we asked Mrs. Hamer if they were an injunction, and she replied, “Yes. It’s just a scrap of paper. It don’t mean anything. I’ll be in Atlantic City, even if I have to go by myself.”

We then had an interesting conversation with Charles, who told us some surprising things about the Sheriff.  For that, you can see my set of Mississippi Freedom Summer blogs elsewhere on this site.