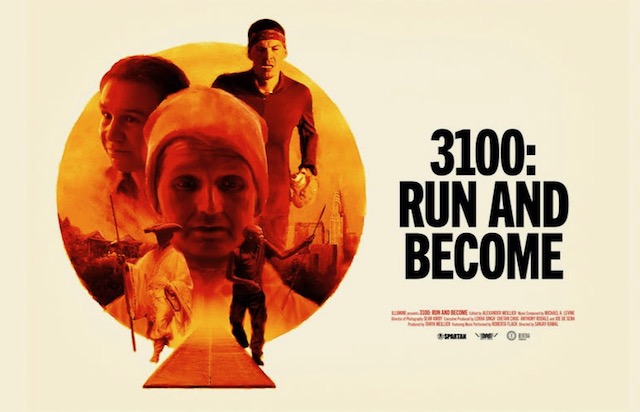 I have taught you the way of wisdom;
I have led you in the paths of uprightness. When you walk, your step will not be hampered;
and if you run, you will not stumble.

Everyone has heard of the Boston Marathon—there’s even a dramatic film about its bombing—but how many of us know anything about the world’s longest certified race, New York City’s Self-Transcendence 3,100 Mile Race. Thanks to Sanjay Rawal’s stirring documentary more people will be introduced to this grueling race that involves athletes from several nations running 60 miles a day around a block in Queens for 3100 miles in 52 days. The race, staffed by faithful volunteers who provide  supervision and food (we are told that runners must consume up to 10,000 calories a day!), is open to the runners from 6 a.m. to midnight each day.

Much of the film’s focus is on the current record holder, Finnish runner Ashprihanal Aalto. He is an unlikely hero in his 45th year, quiet and mild mannered. He says that he is running to become a better person, which no doubt is true, as there is no prize money for this well-organized but small-budgeted race. Years ago, he was inspired by the Indian spiritualist runner Sri Chinmoy, who saw “no barrier between spirituality and athletics.” For him running was a form of prayer. Now deceased, Chinmoy founded the race 20 years earlier. He regarded his running not as a sport but as a spiritual act. The film begins with his words, “I do not compete with rest of the world. I compete only with myself, for my progress is my true victory.” Aalto even changed his first name to the one given him by the mentor.

The film also profiles some of the other dozen or so runners, especially Austrian cellist Shamita, a middle-aged woman so imbued with the “Never Quit” ethos that some years back she impaired her health in a race. Her daughter worries about her, and with good cause, as the woman becomes so exhausted and in obvious distress that the head of the race has to almost drag her off the course to make her stop.

Mr. Rawal widens the view by taking us to other places where running is more than a sport. In Arizona on a Navajo Reservation Shaun Martin begins a ceremonial run at sun-up from his father’s old school site to his family’s ancestral home 110 miles away. His father Allen tells how he was forced there to give up tribal traditions and adopt those of the white man. If any of the students spoke Navajo, they were punished. The history they were taught was that of the white man, never the Navajo. He is making the run-in honor of his father. On a cold morning as he runs along lines from his father’s dedicatory prayer are translated onto the bottom of the screen.

In Botswana’s Kalahari Desert where Bushmen connected running with spirituality because they had to run after game for their food, hunting is now banned by the government. Jumanda  Gakelebone, a Bushman activist states that the ban is meant to strip them from their culture and force them from independence to a dependency upon the government.  Despite the official ban, he brings a famous hunter named Gaolo to teach a group of youth in the old ways, lest they lose their heritage.

Below Mt. Hiei in Japan Buddhist monk Ajari Mitsunaga takes up the spiritual challenge of walking 60 miles a day around the mountain in a “thousand-day challenge.” He prays as he walks, the ordeal not for self-improvement but to equip him to help others. Clad in white, with a walking stick in hand, he says that it is a matter of honor to finish the trek, that some who failed have committed suicide.

The audio often overlaps these segments, demonstrating their connection. In Queens the marathoners’ progress is shown from day to day, with champion Aalto overtaken by a competitor. The former creates suspense by rallying and during the last days gaining on the leader and…

One does not have to be a sports fan to appreciate this film, which combines social justice issues with running and spirituality. Each is inseparable from the other. The sponsors of the Self-Transcendence 3,100 Mile Race claim its participants will be “changed.” They mean this “for the better,” as Sanjay Rawal’s beautiful film demonstrates so well.

Note: This film reminds me of my favorite devotional book, Malcolm Boyd’s Are You Running with Me, Jesus? which became a best seller in the mid-Sixties in both its hard and paperback forms. Episcopal priest Malcom Boyd wrote that he saw prayer not as standing apart from other realms of his life but as inseparable. The collection of plain-spoken prayers included virtually every subject of society and campus, race, sex, politics, personal relations—and for me, my favorite section, even the movies.

This film reminds me also of a second book, this time written by a good friend Dennis C. Benson, a pioneer in exploring connections between culture and faith, so adept at this that he was invited to host a youth-oriented show on Pittsburgh’s KQV which often included interviews with famous rock stars. An avid runner, Dennis wrote a book of meditations inspired by events and thoughts during his daily runs entitled Making Tracks: Meditations Along the Jogging Trail.

The spiritual connection of running and prayer is explored in this story of NYC's Self-Transcendence 3,100 Mile Race , interspersed with runners in Japan, Africa, & a Navajo reservation.
Editor Rating ★★★★★5 out of 5
More Details