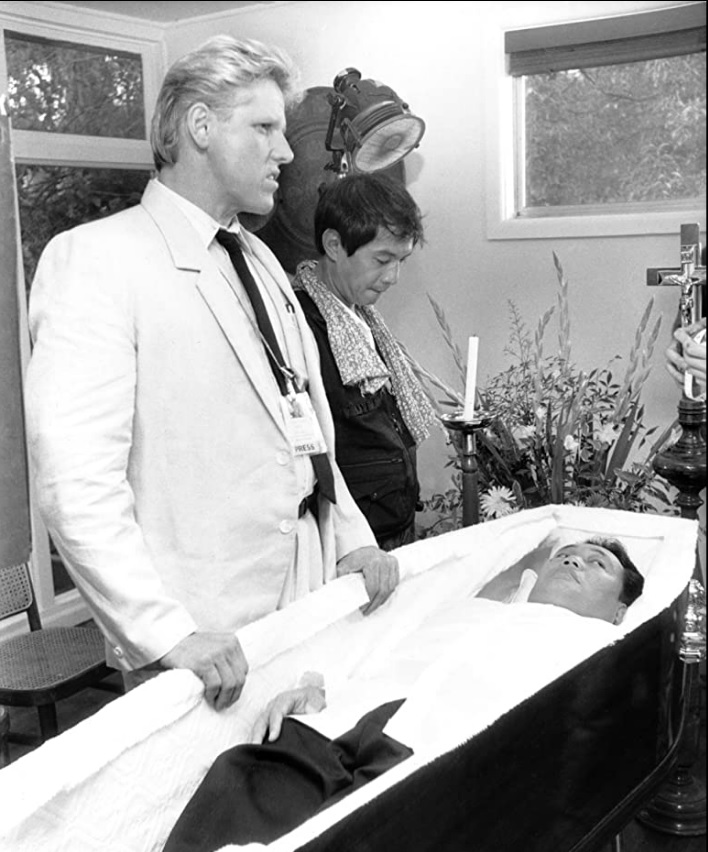 I am posting this because it goes well with the current Frontline documentary A Thousand Cuts, centering on press freedom now under threat in the Philippines.  This film features a fictional reporter, but the story is based on the history of this troubled nation. Look for my review of this PBS documentary within the next day or two. This slightly edited review is from the Nov. 1997 Visual Parables.

NOTE—In early 2021, this film is not available in DVD or Blu-ray or for streaming via Amazon Prime or Netflix. However, someone has posted the entire film on YouTube.

I picked up this Australian made for TV film, about the Philippine uprising, in the bargain bin of a record store, mainly because the script is by David Williamson. He penned the screenplay for one of my favorite Christ-figure films, THE YEAR OF LIVING DANGEROUSLY. If there is a Christ figure in this film, then it must be Cory Aquino, Wonderfully portrayed by Laurice Guillen .. Williamson’s two stories are similar in that they are set in Pacific island nations ruled by dictators, and they both feature II Western journalist, this time Gary Busey playing Tony O’Neill. He persuades his New York office to let him stay in Manila so that he can cover the return of Senator Aquino. Thus, he is on hand when the Senator is gunned down just after he is led by security officers from the plane. Not believing the official version that a Communist assassin killed the dissident (one fully supported by the U.S. State Department – we see actual news clips of this and other real person, such 1’15 President Reagan skillfully edited in), O’Neill sets out to get the real story, and runs into a whirlwind of intrigue.
Although taking the side of the oppressed, O’Neill is no saint – he has been having an affair with a Filipino rights activist while his wife is away writing a book! Cory Aquino returns to her country, and in front of her husband’s bier she pledges to her two daughters that they will find the ones responsible for their father’s death. Looking very much like Mrs. Aquino, Laurice Guillen provides a restrained interpretation of the famous woman. Cory’s strong religious faith is shown many times, as is the important role of the church in rallying the people to turn O!.it into the streets to demonstrate against tile Marcos government. Shots of staged demonstrations are skillfully mixed with shots of actual demonstrations, giving us both the big picture of the scope of the turn out and many small, personal touches of ordinary people risking their lives for I freedom in extraordinary ways.

Most touching scene of all: an old woman in a wheelchair refuses to obey a general’s order to go home. Instead, she wheels right lip to tile tank, saying “Kill me first.” “I’m an old woman,” she says, “I might as well die for my country as any other way,” The tank inches forward, but she and the others in the path remain still. Many in the crowd try to halt the tank with their bare hands. The general keeps urging through his bull horn for the people to go home. As the huge tank almost touches the old woman, the general himself puts out his hands to stop the tank. It does. Soon helicopters fly over tile crowds, perhaps to drop the elite troops called in to quell the tile rebellion. The rebel leaders give orders not to fire, As the troops disembark, their leader proclaims that they have come to join the rebellion.

Both President Marcos and his wife are on the plume hoping that the United States will continue to back them. But too much has happened, including the revelation that Marcos’s World War II medals are fake, he was never with the guerrilla army that he claimed to lead against the Japanese invaders. Ruben Rustia and Tessie Tomas are very convincing as Ferdinand and Imelda Marcos. While showing the expected ruthlessness and duplicity of the President and First Lady, they also show their human side. The scenes of their packing, and President Marcos’s last moments in his office, when, almost crying, he kisses his desk farewell make you feel almost sorry for them. (Yes, we do see Imelda’s infamous shoe closet – it IS huge!)

. I should also add that the director Robert Markowitz also helmed The Tuskegee Airmen. Both films, based on history, are fine social justice films, with this one especially of interest for groups wanting to see Gandhian nonviolence at work

The reporter is fictional, but this film is based on the history of the Philippines when Corrie Aquino inspired her people to topple the Marcos dictatorship by standing against guns and tanks in the streets.
Editor Rating ★★★★★4.5 out of 5
More Details