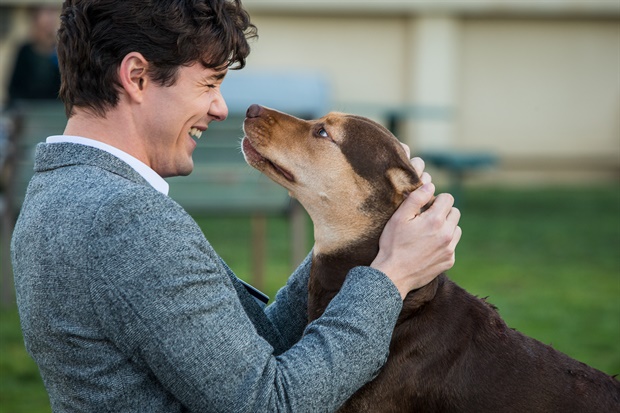 Even the sparrow finds a home,
and the swallow a nest for herself…

It would be easy to become cynical about another dog movie, especially one that includes a talking dog. Waiting for it to begin at the advance screening a viewer and I assured each other that we had our handkerchiefs ready. Sure enough, we were both moist-eyed when the end credits rolled up the screen. There’s no denying that a pooch staring at a camera is irresistible to most people. Director Charles Martin Smith based his film on the best-selling novel by W. Bruce Cameron, author of A Dog’s Purpose, who also co-adapted the script.

A canine heroine Bella (voiced by Bryce Dallas Howard) tells her story of being raised by a cat in a dilapidated house intended to be demolished to make way for a new project. Animal lovers Lucas (Jonah Hauer-King) and Olivia (Alexandra Shipp) manage to stall the destruction on the grounds that there are still animals residing beneath the house. Bella winds up in his care, immediately bringing relief to the mind of his mother Terri (Ashley Judd), a war veteran depressed by her combat experience. The sequence in which Lucas and Olivia take Bella to work with them at the local VA hospital is very funny, they having to hide Bella from the supervising doctor.

There are two villains, real estate mogul Gunter (Brian Markinson) who wants to tear down the house where Bella had lived, and animal control officer Chuck (John Cassini), who enjoyed snatching the animals living under the old house. When he sees Bella he wants to snatch her because of a Denver city ordinance that mandates all pit bulls either be banished or euthanized. Bella does not look like it, but he is sure she is a pit bull.

To assure her safety Lucas ships the dog off to a friend’s rural home in New Mexico, but before she settles in, Bella escapes. Thus begins her 400 mile journey that includes some improbable adventures along the way, including her saving an orphaned cougar cub which she calls “Big Kitten,” an avalanche, staying at various homes, captured by a homeless man who uses her cuteness to elicit donations from passers-by, and attacks by wolves.

This story has been better told in the classic Lassie, Come Home, or the more recent The Incredible Journey (1963)) and its remake, Homeward Bound (1993). Still, for those looking for a family film, this will be satisfying—though adults should be prepared to comfort preschool children frightened by the attack of the wolves. The themes of friendship and home are well handled. The first even a cross-species one—between Bella and humans, and even between the dog and the grown-up cougar. The moment when Bella and Big Kitten must part to go their separate ways is a touching one. Home, that place where you are accepted as you are, is shown to be an interspecies concern, Bella risking everything to return others. Even such a simple film as this can lead one to reflect upon and talk it over, with children, as well as peers.

In this dog movie Bella faces many dangers during her 400 mile journey to return home.
Editor Rating ★★★★★4 out of 5
More Details