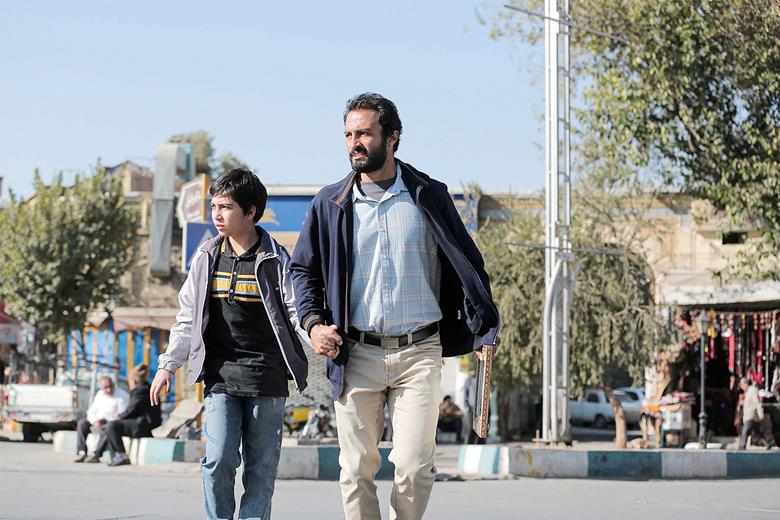 Iranian director Asghar Farhadi has given us a very different film from his 2012 film, A Separation, the first Iranian film to win the Academy Award for best foreign language film. This new one centers on the divorced father of a stuttering boy whose life is turned upside down by social media. The film gives us a very different view of life in Iran than we might get from the news media. At the end it becomes a father-son morality tale in which—whoops, I just deleted a clause, lest I spoil that ending. But I do want to go into it, so I will save it for a

Rahim Soltani (Amir Jadidi) lives in Shiraz where he is let out of debtor’s prison on a two-day leave to clear up the large debt he owes to his former brother-in-law Bahram (Mohsen Tanabandeh. The loan had been given by a loan shark, and when Rahim could not pay it, he had turned to his brother-in-law for help.

We watch as he slowly climbs up a towering scaffold at the cliff of Persepolis where workers are busy excavating the royal tombs that contain the remains of the kings of the Achaemenid Empire. His other brother-in-law Hossein (Alireza Jahandideh) is one of the workers, and he takes a break to discuss the situation with his visitor. That extremely tall scaffold and Rahim’s long climb serve as good symbols of the man’s problem and the exertion to escape from it that will be required.

Rahim and his lover Farkhondeh (Sahar Goldust) take a handbag containing 17 gold coins to a shop in the hope of raising enough debt money from their sale, but the dealer informs them the price of gold has dropped. The amount would be a little under half the 150,000 tomans he owes. In addition to this failure, Rahim’s conscience kicks in, and he decides instead to look for the owner so he can return it. He prints out and posts flyers about the lost item. His prison warden is impressed by what Rahim is doing and decides to post his story on social media in praise of his deed. This leads to a TV reporter interviewing him and the public hailing him as a hero.

Eventually a young woman married to an abusive husband contacts Rahim’s sister Malileh (Maryam Shahdaei), is able to identify the handbag and shows up to in a taxi to reclaim it. The sister doesn’t think to get her name, address or phone number. Through all of this the creditor Bahram steadfastly refuses to cancel the debt and intimates that Rahim is a fraud. Others on social media agree. After a local charity hosts Rahim, giving him an award for honesty, raises part of the money he needs, and arranges for a job interview, matters become really complicated—and for our hero, move downhill. The TV station cancels a follow-up interview because of the negative social media views.

The job interviewer also receives emails accusing Rahim of lying, so he insists on an investigation, including the testimony of the woman who had lost the coins. It develops that there are half-truths or white lies in Rahim’s account, such as his not finding the handbag. It was his girlfriend who had brought it to him. And when the woman cannot be found, Rahim and Farkhondeh engage in a desperate deception.

The film is a powerful parable of an innocent man—the debt was taken out with the partnership of another man, and that man had taken the money and disappeared—who is willing to pay a great price to protect his speech-handicapped son. Even the half-truths Rahim engages in are foisted on him by others—such as the warden who originally put the story on social media telling him to say he, and not his girlfriend, had found the handbag. Except for his family, everyone begins to accept Bahram’s accusation that Rahim is a clever schemer—the people at the charity, as well as the prison warden.

Rahim really screws up when he visits Bahram in his shop to try to convince him to accept partial payment and a bond for repayment of the reminder. The two get into a shouting match, whereupon Rahim attacks the man. Bahram’s daughter Nazanin (Sarina Farhadi) captures this on her phone’s camera, and the pair threaten to post the video if Rahim does not immediately repay his debt.

Rahim goes from being an admired public hero to fraudulent villain, but one of the prison officials Mr. Teheri is certain that Rahim can be redeemed in the public eye by putting a video of his son Siavash (Saleh Karimaei) pleading for help for his father. The sight of a stuttering boy, he is convinced, will move the heart of viewers. Each time the boy can get no more than one or two words out, but at last the would-be benefactor is satisfied and posts the video. Rahim, who has been looking on forlornly, pleads with the man to take down the video. Apparently not willing to see the boy so publicly humiliated, he almost becomes violent again before the man takes is camera and deletes the video.

People of faith will see that Rahim mirrors the fatherhood of his Creator. Out of his compassion, namely his desire that his son not be subjected to the ridicule of cruel classmates if he were to appear on social media, even if it were in defense of his father. He is willing to go back to jail instead. I have not found many reviewers who emphasize this, most suggesting that the film leaves us with a note of ambiguity about whether or not Rahim is a schemer. There might be a touch of that, in that he does go to sell the coins before his attack of conscience, but at the worst I think this shows that he is human—wouldn’t we all, if in such desperation, be tempted thus?

Thus Rahim, the “hero” of the title, is a flawed one, and, to his credit, the filmmaker lets us see that Bahrim, appearances to the contrary, is not a totally hard-hearted villain. There is a backstory in which the lender had lost out on a marriage arrangement because he could not pay for his daughter’s dowry because he had loaned to Rahim the money he had saved up for the wedding. He also raises the excellent point of why honesty should be rewarded and praised so highly? Was it not just a man’s duty to return what did not belong to him.  During all this re recall that the motives of the prison warden in publiciszng Rahim were not entirely altruistic, that he had come under fire for a problem at the prison, and so needed some good publicity to divert the criticism. Even the charity and its leaders are not entirely altruistic in that their quick embracement of Rahim just as quickly turns to abandonment when he becomes a liability.

Asghar Farhadi’s parable is one designed to make us reflect upon important moral issues.  May it fare well in the upcoming Oscar race!

Spoiler in the following so, stop here if you have not seen the film.

The last scene I believe demonstrates Asghar Farhadi mastery as a filmmaker. The action takes place on an oblong screen divided into two unequal sections—the larger the semi-dark waiting room of the prison where Rahim, his head now shaved and his beard reduced to a mustache, sits, and the brightly lit outside. A newly released prisoner is met by a female relative who gives him a tray of cakes to celebrate the occasion. The man returns inside and generously gives one to each of the staff. Rahim tries to refuse, but the man insists, telling him to take them for the guys inside. Rahim smiles and complies. The man returns to the woman outside; talks with her for a while, and Rahim is called to the window. After he is registered, he enters the prison to the left, but the camera lingers for a long time, showing us the freed prisoner talking with the woman. They are framed by the lighted doorway. A bus arrives, they board it, and they ride away to freedom. Fade to black.

What a powerful way to contrast the two men, one emerging to freedom, the other entering into imprisonment, willing to pay this high price for the sake of his handicapped son! How could anyone doubt that we have just witnessed the acts of two good men?