”…let the field exult, and everything in it.
Then shall all the trees of the forest sing for joy.”
Psalm 96.12

Marion loves singing with her friends.                    But husband Arthur resents her absence.
All pictures courtesy of The Weinstein Company (c) 2012
Stephen Sondheim is quoted as saying, “If I cannot fly, let me sing.” That is certainly Marion’s view in Paul Andrew William’s London-set film about an elderly couple devoted to each other. Even though she has terminal cancer Marion Harris (Vanessa Red grave) refuses to stop going to the eccentric choir made up of seniors and led by the perky young Elizabeth (Gemma Arterton). Marion is still filled with the joy of life even though death is just around the corner. Husband Arthur (Terrence Stamp), however, somehow, for reasons unspecified, checked out of life years ago, so he refuses to sit in on the choir practices, preferring to sulk outside the choir room while smoking a cigarette.
The crux of the story is the slow, painful transformation he undergoes after Marion passes away in her sleep, a process that might well get you to sing about the immeasurable possibilities of life. The film is made memorable by the three principal actors, backed up by a fabulous group of senior singers. Also important to the story are James (Christopher Eccleston) and Jennifer (Orla Hill), the Harris’s single parent son and charming little granddaughter. All their lives a seemingly unbridgeable gap had made Arthur rude to and unappreciative of his son. We gather that it is only Jennifer who keeps the two speaking to each other, and for a while after Marion dies, Arthur breaks off all contact with them, so bitter and aggrieved is he. 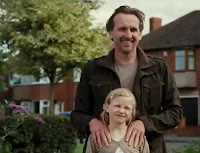 James and his daughter Jennifer.
The tormented Arthur is similar to the apostle Paul in that he is aware of his plight but unable to do anything about it: “For I do not do the good I want, but the evil I do not want is what I do… Wretched man that I am! Who will rescue me from this body of death?” (Romans 7:19 & 24) In this thoroughly secular film (the choir sings pop and hip hop songs, not hymns or sacred choral music) it is not Christ but Elizabeth who comes to Paul’s aid and sets in motion his transformation. (Of course, believers might see the hidden Christ working through this sensitive young woman, so devoted to others!)
At first upset and frustrated by Arthur’s cold rejection, she persists, eventually breaking through the high wall he has erected to defend himself from the pain of the world. What happens to the sad-faced Arthur and his relationships with James is worth singing about! The character of Elizabeth adds depth to the film. At first she seems to be the typical perky young adult, ably reaching out to and inspiring the senior members of her choir, and eventually to Arthur. Then we discover that she is a wounded healer, showing up suddenly late one night and pouring her heart out to Arthur, of all people. Perhaps it is her revelation of her vulnerability and need that touches something deep in Arthur so that he is able to give the support she needs at that moment. This, and his unsuspected talent for singing, leads to a series of events that neither of them could have imagined earlier on.

Elizabeth leading the choir of seniors.
Paul Andrew William, who directs from his own script, has given us a remarkable parable of love, transformation, and the power of song. Arthur reminds me of the uptight Englishman Basil (though in a more extreme form) in Zorba the Greek, with Marion and Elizabeth being his Zorba who lead him to embrace life. The film draws back from the brink of sentimentality (the death scene is very understated—no tearful farewells or sweet last words), although depictions of some of the senior singers are almost too cute. So too is the choice of the song for the choir to sing for their festival tryout, “Let’s Talk about Sex.” If you explore this film with a church group, be sure to give advance warning of this song. Although this one is played more for cuteness, the singing of two other songs will have you reaching for a handkerchief.Marion sings Cyndi Lauper’s “True Colours” for Arthur, and later Arthur sings Billy Joel’s “Goodnight My Angel.” Wow! On the whole this is a film filled with joy and goodwill that says that it is never too late to mend a wounded spirit and restore broken relationships.

For Reflection/Discussion
1. Compare Marion and Arthur. Despite their vastly different temperaments, how do they relate to each other? What couples do you know like them?
2. What might have led Arthur to become the negative person that he is? Which of the two understands the need for others in one’s life?
3. What do you think of James and the way he is depicted? How has his father’s treatment of him apparently affected him? Despite this, what kind of a father does he seem to be?
4. What did you think of Elizabeth in the first part of the film? Of her rapport with her choir members? Were you surprised at her revelation of her past and of her need? Would you have thought that she would have turned to Arthur for help, rather than to one of her choir members? What other surprises do we see in Arthur?
5. What do you think of Henry Nouwen’s concept of “the wounded healer”? (If you haven’t read his book yet, by all means get hold of it.) How is Elizabeth a Christ figure despite her own needs?
6. Check out Cyndi Lauper’s “True Colours” with it’s opening line, “You with the sad eyes/Don’t be discouraged.” How is it the perfect song for Arthur?
http://www.lyrics007.com/Cyndi%20Lauper%20Lyrics/True%20Colors%20Lyrics.html
7. In turn read and discuss “Lullabye (Good Night, My Angel.” What of Marion and Arthur and their relationship do we see in the lyrics?
Note: these are available on YouTube, so if your discussion takes place where Wi Fi is available, you might play them as the group is gathering, or during the discussion. (If you do, keep that box of Kleenex handy!)
http://www.billyjoel.com/music/river-dreams/lullabye-goodnight-my-angel
8. What does the film say about the process of transformation? Is this a do it yourself matter, or are others needed? (See the Letter to the Romans passage cited above.) In your own life how have others contributed to the changing of your outlook, beliefs, or prejudices?
9. How does James’ rejection of his father’s attempt to mend their broken relationship show that reconciliation can be a difficult task? In the apostle Paul’s discussion of reconciliation what was the cost? See 2 Corinthians 5:11-21. Why does he say to Arthur, “It’s too late”? Is it ever too late?
10. This is a thoroughly secular film about thoroughly secular people—no mention of God, even by Marion who faces imminent death; no singing of church anthems or hymns. And yet would you agree that it is a deeply spiritual film? Why or why not?
11. Much has been written about the power of music, and we certainly see it in the lives of Marion and Elizabeth. Reflect upon/discuss the following observation by singer Josh Groban
“Some people don’t realize the healing power in song. True listening to a song can cause a good cry or help you to relieve that tension that might have been building up. But the listener is not the only one who benefits. Often times the singer finds most of their freedom when letting a song out of their heart. A singer who really loves to sing carries a song in their heart all the time. Singing might sound pretty and may be a beautiful art but for the singer, it is so much more. Don’t ever let that passion die if it is something you love to do.
There’s no half-singing in the shower, you’re either a rock star or an opera diva.”
This and other good quotes on music can be found at:

4 Replies to “A Review: Unfinished Song (Song for Marion)”