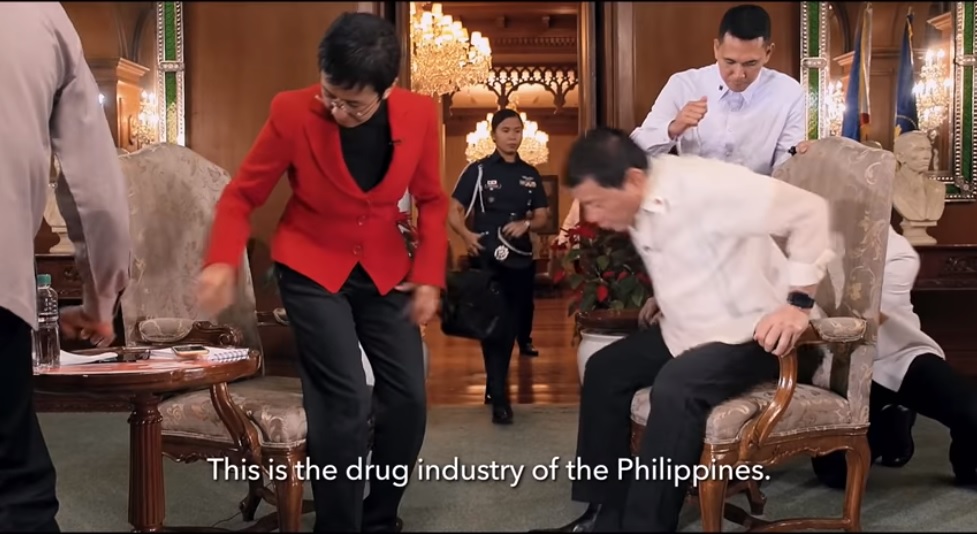 
Justice is turned back,
and righteousness stands at a distance;
for truth stumbles in the public square,
and uprightness cannot enter.
Truth is lacking,
and whoever turns from evil is despoiled.

The Lord saw it, and it displeased him
that there was no justice.


I am grateful to a Canadian reader who has called my attention to this important PBS documentary that I  missed when it was first cablecast.

It is an old truism that journalists are supposed to report the news, not to become it. But in countries in which the government regards a journalist as an “enemy of the people,” they are likely to become the story when they dare to criticize those in power. Too often they are charged with crimes and thrown into prison, or, as in the case of the Saudi Arabian journalist Jamal Khashoggi, killed by a hit squad. The fate of one such journalist, Filipino-American  Maria Ressa, is chronicled in Ramona S. Diaz’s engrossing PBS documentary. One of the four “Guardians” (Jamal Khashoggi being another) to be named Time’s Person of the Year for 2018, proves to be a fearless and calm advocate for democracy in a land sliding toward dictatorial rule.

The cast of characters could hardly be more interesting or colorful if this were a fictional film—a flashy group of villains headed by Rodrigo R. Duterte, President of the Philippines; Senator Ronaldo “Bato”’ dela Rosa; and Mocha Uson, dancer/singer/actress, widely called “Queen of the Fake News.” They hold such power that they constitute a Goliath, while opposed to them is David, consisting of a brave corps of journalists working for the opposition news outlet Rappler—reporters Samira Gutoc; Pia Ranada; and CEO Maria Ressa. Fear hovers over the group of journalists because President Duterte does not try to hide his murderous deeds, but openly boasts that he has killed drug dealers himself. (Hmm, heard any other leader make a similar boast?)

Sadly, millions of Filipinos applaud their president and his “War on Drugs,” accepting his claim that he is making their streets safe again for themselves and their children. Pop star Mocha Uson blogged in favor of the president, whipping up even more support for him, spreading lies about the press so effectively that he made her his presidential assistant press secretary.

National Police Chief Ronald dela Rosa eagerly does Duterte’s bidding, his men gunning down young drug sellers and dissidents during the night and killing them indiscriminately. Deciding to run for a Senate seat, “Bato” is so strongly denunciatory during a candidates’ debate that the moderator a couple of times touches him as she asks him to cool his speech. Bald and stocky with piercing eyes, he looks like a brown-skinned Mussolini. When one of his opponents points out that it is poor youth driven by desperation to see drugs who are being killed—no drug lords have been brought to justice—he brushes this off.

Also running in that Senate race was Samira Gutoc, a lawyer and long-time advocate for women and thus opposed to President Duterte and his war on drugs. Had she won, she would have been the only Muslim in the Senate. She must be an effective dissident, because she was charged in 2019 with “”sedition, cyber libel, libel, harboring a criminal, and obstruction of justice“.

We see that the slim Ressa is a dynamo, calmly addressing her staff, conducting interviews, and traveling outside the country due to her status as an internationally respected journalist. She returns from one trip and is promptly arrested. She and her staff receive hundreds of death threats and vicious insults from people stirred up by Mocha Uson’s slanders against them. Reflecting on her past, Ressa looks at some clippings and photos of Cory Aquino and the People’s Power Revolution that toppled the dictatorial Mracos regime back in the 1980s, indicating that was when she herself felt encouraged to become a journalist and speak out against tyranny. (Hence my bringing up from the archives and posting it elsewhere in this issue a review of the film about this event, A Dangerous Life.) We sense that Ressa has thought deeply about her opposition to her government when she quotes the famous statement by anti-Nazi Pastor Martin Niemöller and applies it to herself and her country:

First they came for the socialists, and I did not speak out—because I was not a socialist.

Then they came for the Jews, and I did not speak out—because I was not a Jew.

Then they came for me—and there was no one left to speak for me.

The last part of the film shows a human side of the journalist as her sister in NYC tries to get her to wear a slinky dress to a banquet that night where she is to speak, but she holds out for her prosaic old dress. On a more serious note she tells her sibling, “It is ironic that even though our choices (of where each would live) were different, our two nations now have the same type of leaders. Macho, populist, sexist at best, misogynist at worst. They both use anger and fear to divide and conquer. They’ve created a politics of hate. We need to put hope and love, but I’m going to sound schmaltzy. It’s not with hate but with hope and love, we hold the line.”

Elsewhere the filmmakers see the Philippines as a laboratory where reactionary powers experimented with social media during  Duterte’s election. The Philippines was a good place for this, its people spending an average of 10 hours a day online, and with virtually 100% of them having a Facebook account. A chart shows how such a logger as Mocha Uso, “Queen of the Fake News,” could reach out and how 26 fake accounts quickly reached three million subscribers. First the Philippines, serving as a test case, then the United Sates.

The film does not end with good news, Maria Ressa being arrested and convicted to serve a harsh prison term, and yet to the end it maintains a hopeful posture. I will long remember her remarking to her sister on the way to that New York press gathering, “We stupidly believe that goodness wins over evil,” a statement that reminds me of Nellie Forbush’s song in South Pacific, “A Cock-Eyed Optimist.” Like the prophet Jeremiah, who also was imprisoned by the enemies he denounced, Maria Ressa is faced with hardship and danger. At a time when governing authorities spin lie after life, which are then spread by their sycophants, any truth teller, which reporters strive to be, faces calumny* and threats. Maria Ressa is blessed with support from journalists around the world who will keep an international spotlight focused on her. Ramona Diaz’s documentary is an important part of that world-wide campaign which I hope will provide a small measure of protection. This is a must see film for those concerned with truth telling and the preservation of a free press!

*One insult hurled at opposition journalist is  “presstitute”!

The story of journalists, chief of whom is Maria Ressa, waging an uphill battle in the Philippines against Pres. Dutertes & his murderous "War on Drugs," made very difficult by the government's lies on social media about its critics being "Fake News."
Editor Rating ★★★★★5 out of 5
More Details