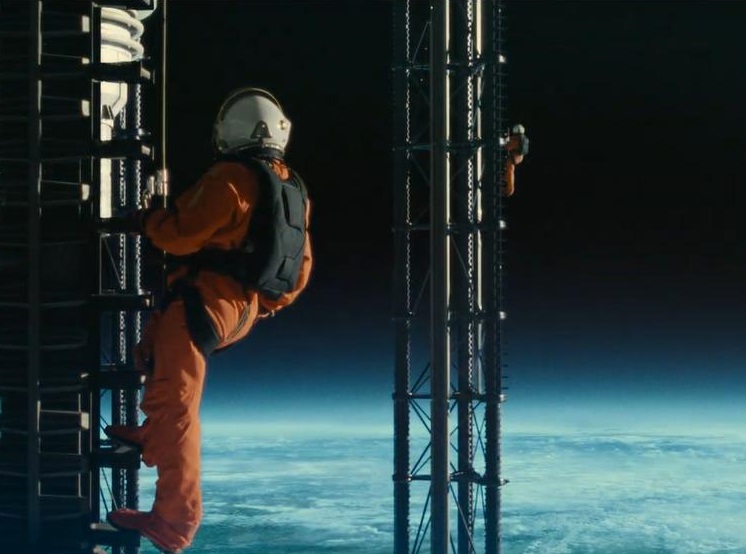 When I look at your heavens, the work of your fingers,
the moon and the stars that you have established;
what are human beings that you are mindful of them,
mortals[a] that you care for them?

The Psalmist might see the hand of God in the stars, but to the analytical Major Roy McBride (Brad Pitt), son of famed pioneering astronaut H. Clifford McBride (Tommy Lee Jones), they are merely distant destinations. Director James Gray’s science fiction adventure film, which he co-wrote with Ethan Gross, is very down to earth in its approach, Roy McBride, whose psychological state is constantly being monitored at Space Com via tiny sensors attached to his body, always calm and collected during emergencies, of which there are several.

Set in “the near future,” the film’s plot by intention is similar to Joseph Conrad’s Heart of Darkness and the film inspired by the novel, Apocalypse Now. Earth does face an apocalypse, a series of power surges that threaten humanity. Roy himself almost loses his life when a surge catches him and a crew of astronauts repairing a space installation circling the earth. He survives, but several of his colleagues do not. His superiors inform him that the dangerous surges have been traced to the base of The Lima Project, located on Neptune. His father had led the expedition that 16 years earlier had journeyed there to set up a facility for determining if there is intelligent life beyond the solar system. Contact had been lost, and so Clifford and crew were assumed to be dead. The surges are caused by the anti-matter drive that had propelled the ship, and it is being conjectured that the Commander might still be alive directing the surges toward earth. Roy agrees to go to Mars to try to contact his father.

The long voyage includes going to the Moon base where Roy’s party is attacked by scavenging pirates, with his traveling companion, a man who had known his father, Colonel Pruitt (Donald Sutherland) being mortally wounded. He has another narrow escape enroute to Mars, and before they land on the planet another power surge hits the ship, Roy himself saving it when the pilot panics. After a brief meeting with  Helen Lantos (Ruth Negga), Director of the Mars facility, he records the voice messages to be sent to the Lima Project. Dissatisfied with the official one, Roy records a second, this time making a personal plea to his father. Before he can hear if there is a response, Earth command declares that he psychologically unfit and removes him from the project. However, he can see by the excitement on the faces of the sound booth technicians that they have received a response from his father.

Helen reveals to Roy a dark secret concerning his father and her parents and helps him climb aboard the space ship that is being dispatched to Neptune with a nuclear device to destroy the Lima base. There follows a series of adventures and mishaps that lead to an exciting and provocative confrontation with his father. The anxious anticipation is similar to that we felt in Apocalypse Now when Martin Sheen’s Capt. Willard, after his long and dangerous upriver journey, reached the lair of Marlon Brando’s Col. Kurtz.

This is a father-son film as well as a Heart of Darkness one. He has lived his life, during childhood looking up to his demanding parent as a role model, and as an adult having to live in the shadow of his father’s fame. During Roy’s voice over he speaks of the rage that was in his father and that he sees in himself. “I don’t know how to get around that…It worries me…I don’t want to be my Dad.”

Roy McBride’s devotion to space exploration had been as intense as his father’s, thus estranging him from his wife, whom we see briefly from time to time throughout the film. His final comments leave us hopeful, about his fate and the future of their relationship: “I’m steady, calm. I slept well, no bad dreams. I am active and engaged. I’m aware of my surroundings and those in my immediate sphere. I’m attentive. I am focused on the essentials, to the exclusion of all else. I’m unsure of the future but I’m not concerned. I will rely on those closest to me, and I will share their burdens, as they share mine. I will live and I will love.”

Roy is an astronaut given the assignment to find his astronaut father supposedly lost years earlier while leading a project on Neptune to discover if there's intelligent life in the universe.
Editor Rating ★★★★★4 out of 5
More Details