Skip to content
Rated PG. Our Ratings: V -2; L -0; S/N -0.  Running time: 1 hour
“Do not store up for yourselves treasures on earth, where moth and rust consume and
where thieves break in and steal; but store up for yourselves treasures in heaven,
where neither moth nor rust consumes and where thieves do not break in and steal.
For where your treasure is, there your heart will be also.
Matthew 6:20-12 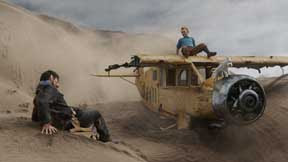 Our hardy heroes survive the crash of their plane in the desert of North Africa.
© 2011 Paramount Pictures
After an almost 30 year delay, Steven Spielberg has at last brought to the screen the beloved teenaged reporter/sleuth Tintin. Popular throughout the rest of the world during its run as a comic book series between 1930 and 1976, Belgian artist Herge’s hero might just catch on here, so captivating is the movie, shot in 3D motion capture animation. The pace is so fast, and the laughs so many that the attention of neither young nor older viewers is likely to wander.
The Unicorn of the title is not the mythical animal itself but a model sailing ship with that name which Tintin purchases for a pound at a flea market. A sinister looking man tries to buy it for a greater price, but Tintin refuses. (One of the film’s many humorous touches is the vender bemoaning his letting the ship go for such a low price.) Of course, later the model is stolen, setting off a far-flung adventure in which the boy teams up with Captain Haddock (Andy Serkis), whose cargo ship has been taken over by the evil Sakharine (Daniel Craig), who heads it toward Morocco. (Sakharine was the man who originally had tried to buy the model from Tintin.) Haddock reveals that both he and Sakharine are descendents of 17th century seafarers whose treasure-laden ship sank off the coast of North Africa. The model ship had contained one of three tiny scrolls of paper giving clues to the location of the old ship. All are needed in order to determine the latitude and longitude of the sunken ship. Finding those scrolls proves to be an arduous and dangerous task, with thrills galore.
This is an anticipated film that lives up to its advance hype. The motion capture animation is so realistic that my companion had to be reminded that the film is animated. The color is gorgeous, especially in the scenes set in Morrocco, and the action virtually non-stop. The sequence in which Haddock and Rackham “swordfight” with two giant shipyard cranes is one of the most inventive action sequences to be found anywhere. Our plucky hero and his smart little dog are delightful, and there is the expected moral lesson, as can be seen at the low point of the story when even Tintin has given in to despair. Haddock says, “I thought you were an optimist.” Tintin, “You were wrong, weren’t you? I’m a realist.” “Ah, it’s just another name for a quitter.” “You can call me what you like. Don’t you get it? We failed.” “Failed. There are plenty of others willing to call you a failure. A fool. A loser. A hopeless souse. Don’t you ever say it of yourself. You send out the wrong signal, that is what people pick up. Don’t you understand? You care about something, you fight for it. You hit a wall, you push through it. There’s something you need to know about failure, Tintin. You can never let it defeat you.” Good words for all of us to take to heart. We all should have a friend and companion like Haddock.
There is also the good news that this is the first of a planned trilogy. And even though Spielberg will not
direct the second installment, there is still good news in that the co-producer of this show will take over the helm—Peter Jackson. Thanks to these two, Tintin should become as beloved in this country as he is in the rest of the world. It is too bad that Georges Remi (whose nom de plume was Herge) did not live to see this happen, but I believe he would have been pleased with what the American who befriended him long ago has produced,
A version of this is available with discussion questions for VP subscribers.