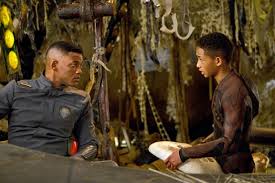 Cyber instructs his son about the dangerous trek he must make.
© 2013 Columbia Pictures
Even though I walk through the darkest valley,
I fear no evil;
for you are with me;
your rod and your staff—
they comfort me.
Psalm 23: 4
There is no fear in love, but perfect love casts out fear; for fear has to do
with punishment, and whoever fears has not reached perfection in love.
1 John 4.18

Director M. Night Shyamalan, rather than directing from a script written solely by himself, takes on a story originally suggested by Will Smith, with co-scriptwriter Gary Wita (who also wrote The Book of Eli) joining him. According to the press notes, Smith had envisioned this father-son story as a survival tale resulting from a camping trip gone awry in today’s wilderness. Instead, it has been enlarged to a tale set a millennium off in the future with a space ship replacing a SUV. So, seven years after The Pursuit of Happyness in which the father-son pair survived on the streets and subway bathrooms of San Francisco, we have them fighting for their lives on a planet where both animal and plant life are bent on destroying anything human.

The title refers to the fact that there has been a mass migration from Earth due to pollution caused by war and industrial and civic pollution. Young cadet Kitai Raige (Jaden Smith) has just failed to advance to Ranger status because of his headstrong rebellion against his superiors while in the field. He is very despondent because he so wants to win the respect of his disciplinarian father, the famous United Rangers General Cypher Raige (Will Smith). The latter is gone so much that a distance has opened up between the two. The father has just returned, and the son, after angrily telling him the bad news during supper, stalks off to his room. Fortunately his wise mother Faia Raige (Sophie Okonedo) is there to explain their son’s behavior and advises Cyber to pay especial attention to the boy. He accepts this, saying that he can and will take Kitai with him on his last trip. Even better for her, he reveals that after this next mission he plans to retire to spend more time with the family

As the father and son are getting ready to board their ship, three Rangers, recovering from their battle wounds, respectfully approach the General, thanking and saluting him for saving their lives. This seemingly small scene will take on more importance at the end of the film. Before they can reach their destination, the spaceship is terribly damaged while passing through an asteroid belt, forcing them to seek a landing spot for emergency repairs. Unfortunately the closest planet is under a quarantine forbidding anyone from landing on it. However, they have no choice, and the landing is so rough that the ship breaks apart, the tail section fallen almost 200 kilometers behind. Everyone is killed but the father and son.

It is in that far off tail section that an emergency beacon and oxygen-containing disks are contained. Cyber’s legs are too badly injured for him to make the trek it is up to Kitai to make the trip. Succeed or die. Oh yes, that tail section also included the container in which a deadly creature called an ursa was being transported. Ursas are vicious creatures that track humans through their fear.  Earlier we are told that to avoid being killed by one a person must become a “ghost” by eliminating all fear, ghost in the sense that he is invisible to the predator as long as fear is held in check. 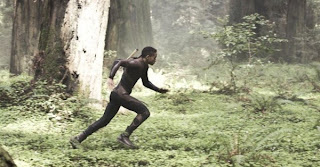 Through a series of short flashbacks we learn that when he was a young child Kitai had watched helplessly as an ursa killed his older sister Senshi (Zoe Kravitz), so the teenager must wrestle with his inner guilt and fear that he had in the past been a coward, as well as the present outer dangers of the hostile planet. Yes, the planet turns out to be the earth, the creatures of which have mutated into predators seemingly designed to kill their former tormentors. Cypher tells his son, “Fear is not real. It is a product of thoughts you create. Do not misunderstand me. Danger is very real. But fear is a choice.”

Just how difficult the choice of not to fear we soon see when oxygen supply is cut short when some of the disks are smashed. With the earth’s air too polluted, Kitai has enough oxygen to return his father, but not enough to reach the tail unless he takes a perilous shortcut that probably will result in his death. Against his father’s orders, Kitai refuse to return, and…. The film offers plenty of thrills for adventure lovers, climaxing, of course, in the encounter with the hungry ursa.

Visually the film is also exciting, from Kitai’s cool body-clinging survival suit that changes color when danger is near and contains a two-way camera in the wrist so that Cyber can monitor his movements to the computer-enhanced terrain so beautifully verdant. The screening audience became so thoroughly caught up in the story that they applauded at several key moments, especially in the final scene when we see the strict father at last showing his approval in a very moving way. The film will not become a classic, with many of the critics displaying their disapproval. However, I found it very enjoyable, with the comment about fear being intriguing.

Like most sci-fi stories, this one seems to presume that religions have been supplanted by science and reason, so the equivalent of the assurance of the line from the 23rd Psalm is Cyber’s assuring Kitai that he will be with him every step of the way by means of their communication system. And his observation about fear being fueled by thinking of possible bad future consequences means that one must take no thought of the future but concentrate solely on the present moment reminds one of “Carpe diem” (“Seize the day”) in the film Dead Poets Society—or better, of the one who said in regard to our worried over food and clothing, “Do not be anxious about tomorrow…”

The review in Visual Parables will contain six questions prior to the one below. This one might lead to some discussion about science fiction and its treatment–or lack of–of religion. I also want to call your attention to a classic sci-fi novel that I hope some day will be made into a film: 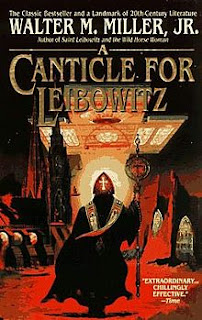 7. What do you think of the way in which so many sci-fi authors write off the Christianity and the church (or any other religion for that matter)? How do they under-estimate the ability of organized faith to adapt to new circumstances? For those seeking a sci-fi novel that takes a very different tact with faith see Walter Miller’s 1960 classic The Canticles of Leibowitz. Wikipedia has a good article on it at” http://en.wikipedia.org/wiki/A_Canticle_for_Leibowitz
For an amusing trailer of a fictional movie adaptation of Miller’s novel, see http://www.youtube.com/watch?feature=player_detailpage&v=8MY5-DsYpvs