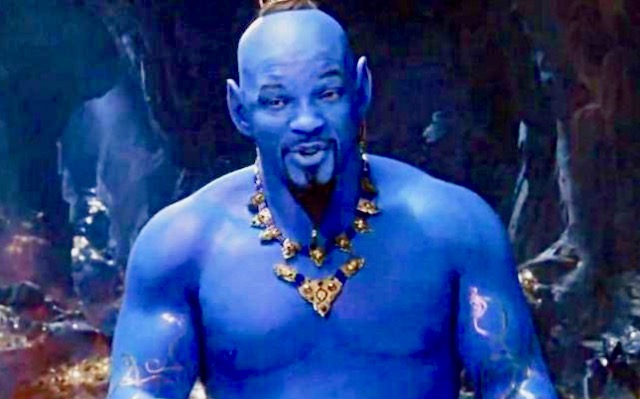 For where your treasure is, there your heart will be also.

Guy Richie directed and co-wrote (with John August) Disney’s latest from cartoon to live actor film, the result being an enjoyable visual parable about power, friendship, truth, and freedom (mainly women’s), enhanced by some tuneful music. The plot, with some notable additions, is the same as the cartoon’s, and so is much of the music, including the lovely “A Whole New World” that won both an Oscar and a Grammy as “Best New Song” back in 1992.

It is the additional material that make this old fairytale (added to the Arabian Nights in the 18th century) so relevant and enjoyable for viewers today. Aladdin (Mena Massoud)) is the same kind-hearted street thief of the fictional Arabian city of Agrabah sharing his food with the hungry, but Princess Jasmine (Naomi Scott) longs for more than just freedom from the confinement of her palace—a wish granted by Aladdin, disguised as a prince when he takes her on a magic carpet ride around the countryside—she also wants to be able to exercise political power with her elderly father the Sultan (Navid Negahban), and even to get rid of  the law forbidding a female from becoming the ruler so that she can succeed him.

She strongly opposes the advice of her father’s scheming vizier to protect their borders and go to war against their neighbors. Her song “Speechless” expresses her feminist desire to come out of the shadows of the old patriarchal society to which women are relegated.

Will Smith as the blue Genie will not make us forget Robin Williams’ screamingly funny depiction in the original, but his hip hop singing and actions are humorously commendable. In addition to his friendship threatened with betrayal by Aladdin is the romantic attraction between him and Dalia (Nasim Pedrad), Princess Jasmine’s spunky handmaiden and confidante. Indeed, as a married mariner he is the one, rather than a street peddler, who provides the film’s opening narration. Early on he offers good advice to Aladdin when the young man is thinking about the three questions granted the owner of the magic lamp. He tells Aladdin that most men have wished for money and power. “The more you have, the more you want,” he warns.

Jafar, of course, who reminded me of Haman in the story of Queen Esther, has been trying to obtain the lamp from the Cave of Wonders for just such reasons. However, he knows he does not measure up to the Cave’s criteria, “Only one may enter here. One whose worth lies far within. The diamond in the rough.” And so Jafar uses Aladdin, once he catches up with him, to enter the cave and retrieve the lamp for him. Jafar, whose motto is, “You’re either the most powerful man in the room, or you’re nothing,” plans to overthrow the Sultan.

Along with female empowerment and the lust for wealth and power is the importance of honesty and trust, with the young “diamond in the rough,” disguised by Genie’s power as a fake prince, wrestling with his conscience over deceiving Jasmine about his lowly origin. He thinks he is worthless as a street urchin, despite Genie’s telling him that when he changes his outer status, he is the same person inside.

The live film is 40 minutes longer than the animated version, and those extra minutes are used wisely. The acting, songs, stunts (mainly Aladdin’s during some thrilling chases), and CGI special effects add up to a thrilling adventure and romance(s) for young and old, packed with moral values. The screening audience, many of whom were children who might not have seen the 1992 version, loved it—and so did my grown daughter and her husband and yours truly.

This review with a set of discussion questions will be in theJune issue of Visual Parables.

Aladdin with the help of the magic lamp's Genie seeks the hand of Princess Jasmine over against the schemes of the evil Jafar.
Editor Rating ★★★★★4.5 out of 5
More Details