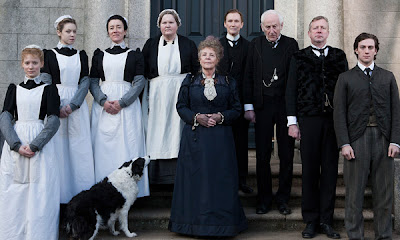 The Morrison’s Hotel staff, with Albert Nobbs standing to our right
behind Mrs. Mrs. Baker, the proprietress.
© 2011 Roadside Attractions
How long, O Lord? Will you forget me forever?
How long will you hide your face from me?
How long must I bear pain in my soul,
and have sorrow in my heart all day long?
Psalm 13:1-2a
Those who enjoy movies off the beaten path will relish this version of a play based on a short story by George Moore. The character giving his name to the title is a meek but impeccable waiter at Morrison’s Hotel in 1898 Dublin, Ireland. As the film begins Mrs. Baker (Pauline Collins), the proprietress of the hotel, has assembled the staff and greets each guest, by name or by groups as they are seated at their usual tables. Among them is a nobleman and his frivolous companions. The class lines are as rigidly observed here as they are in London.
Glenn Close, with cropped hair and heavily made up, is marvelous as Albert. The other staff members think he is odd, but none suspect the he is a she. None, that is, until Hubert Page is engaged to repaint one of the rooms and Mrs. Baker insists, despite Albert’s objections, to bunk him for the night with Albert. Albert is almost too terrified to get into the same bed, and when she/he does, cannot relax in a half undressed state. Causing a disturbance that arouses the sleeping man, her sex becomes obvious. Albert implores him not to give her away, and he agrees. The next day Hubert makes an equally startling revelation to her, the nature of which you can guess by my telling you that it is Janet McTeer who plays Hubert.
Later Albert visits Hubert because the latter has told how he has married and is living happily with his Cathleen (Bronagh Gallagher). During this visit Albert shares her story of being orphaned, gang raped, and discovering that a waiter could make decent wages, dresses as a man for the first time. Cathleen listens at the door but continues to treat Albert with kindness.
Albert now dares to dream of a life beyond his closet-bound present, his goal being to add to the stash of cash hidden beneath a floorboard of his room so that he can afford to buy a run-down shop and turn it into a tobacco shot and apartment. He even dares to think that he might find a companion similar to Cathleen in Helen (Mia Wasikowska), the flirty hotel maid who scarcely pays any attention to him. She is interested in Joe (Aaron Johnson), the new man hired to fix and attend to the decrepit boiler. The two become a pair, but after Albert asks Helen to take a walk with him, Joe encourages her. He wants her to wheedle whatever she can from Albert, beginning with candy, but then progressing to clothing and money. Joe promises Helen that if they can obtain enough, he will include her in his dream to emigrate to America.
Thus the film becomes sort of an Irish Upstairs/Downstairs, or maybe, better, Angela’s Ashes, though this film is more of a dark comedy than the earlier one. Had not most churches of the time been as blind to the plight of the lower class as the hotel guests were, Albert might well have turned to the Psalms for relief. She has lived in tense misery for so long that she cannot even remember her given name when Hubert asks her.
Perhaps the only glorious moments in Albert’s life is when she returns to visit Hubert, and the pair don dresses and walk together on the nearby beach. Glenn Close runs along the shore, the camera angle such that we see just part of her body, giving the appearance that she is flying. For one brief moment she is freed from pretending and fulfills Hubert’s words, “Albert, you don’t have to be anybody but who you are.”
As the story develops, with Albert’s relationship with Helen deteriorating, we realize that this is the high point in Albert’s lonely existence. The bittersweet resolution of the story is sweetened a little in that Hubert is brought back to the hotel, this time to paint all of the rooms. His last words to a fearful Helen as he holds her baby, “We can’t let that happen, can we?” add to the dark film a note of grace and hope. The circumstances of this I will leave to you to discover. Glenn Close who starred in the stage drama version of this film almost 30 years ago, has worked for a long time to bring the story to the screen. We are in her debt, and it is fitting that she has been nominated for an Oscar for her beautifully crafted portrayal of one of Christ’s “the least of these…” who seldom received any of the mercies the Master said were their due.