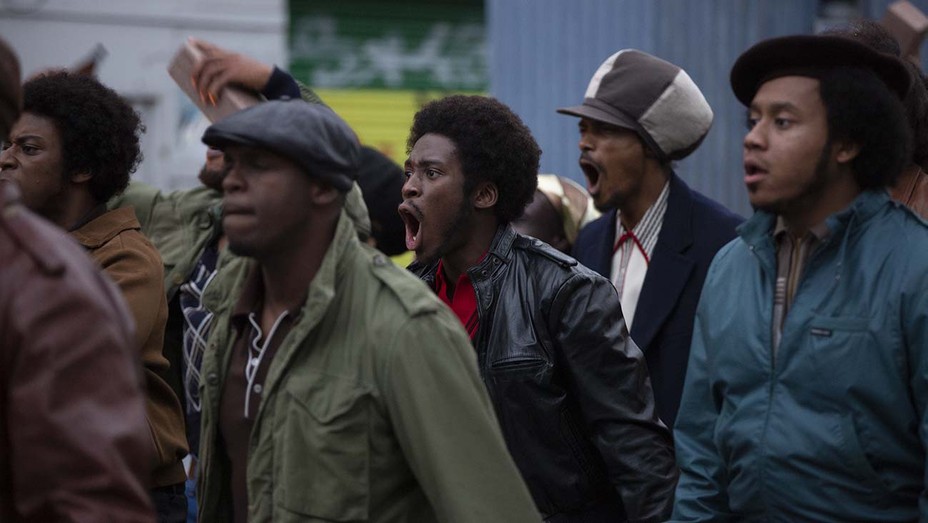 Happy are those whose help is the God of Jacob,
whose hope is in the Lord their God,
who made heaven and earth,
the sea, and all that is in them;
who keeps faith forever;
who executes justice for the oppressed;
who gives food to the hungry.

The Lord sets the prisoners free;
the Lord opens the eyes of the blind.
The Lord lifts up those who are bowed down;
the Lord loves the righteous.

Steve McQueen and cowriter Alastair Siddons cover the early life of writer Alex Wheatle (Sheyi Cole), from a young boy through his early adult years. Born in Brixton of Jamaican parents in 1963, he spent his childhood in foster care and a children’s home because of parental neglect. Along with many other children he suffered verbal and physical abuse from the white caretaker, so that by the time he attended school he was withdrawn and morose. He does bond with fellow student Valin (Elliot Edusah) over reggae music, but to his teachers he is a disruptive nuisance. When he fights with a racist white student, he is the one whom security subdues by placing him in a straight jacket. He is literally dumped onto the hard floor of a vacant hall, the camera moving in and lingering on his shock face for what seems like a long time and then slowly moving back. He might as well have been a bag of garbage for all that the school authorities cared.

The film jumps back and forth between this period, his teen years when he lives in a Brixton hostel, and his brief period of incarceration when he is arrested by the police for participating in the 1981 Brixton Uprising. He had started out so naïve that at a barbershop he had denied that he was African, declaring, “”I might be Black, but I’m from Surrey.” His friendship with Dennis (Jonathan Jules) brings him partway out of his isolation. When Dennis invites him to share Christmas dinner at his home, Alex is accepted as one of the family. The food is so good that he wolfs it down as if there would never again be such bounty for himself. And yet the warmth of the members makes him realize all the more what he had been deprived of.

Years later Alex meets up again with Vincent and joins with him in a DJ partnership. The two had been hanging out at a record shop listening to and buying records, and he even writes some of his own lyrics. There is also a strange scene in which Alex, seeking work from the local drug kingpin, is forced to disrobe to prove he is not a wired police informant. I presume that this is how he can afford the equipment for his DJ gigs.

The New Cross fire that triggered the riots known as The Brixton Uprising lead to his arrest and imprisonment where he really comes of age intellectually and socially. Over a dozen Afro-Caribbean youth had died in the building that had burned while they were partying. The mysterious fire might have been set intentionally, or it might have been caused by the party goers. The authorities did not seem to care, apparently having no intention to launch an investigation. This was the last straw on top of so much past abuse by the police. The West Indian community rebelled, fighting the shield-protected police in the streets. Over 275 policemen were injured, and 45 of the public. 82 arrests were made, one of which was Alex’s.

This event is largely told through a series of news photos accompanied by recording artist Linton Kwesi Johnson, a founding member of the New Cross Massacre Action Committee, reading his famous (in the UK) poem “New Crass Massakah.” He describes the tragedy and its implications in patois that connected directly with the raw feelings of the oppressed. ( You can hear this on YouTube, the video also containing further information about the fire and the riot and even includes a clip of activist Darcus Howe, an important character in Mangrove.)

In prison Alex’s cellmate is a physically imposing man named Simeon (Robbie Gee) whom the newcomer at first tries to reject because of the smell due to the man’s health problems. Simeon will not take “No” for an answer. A Rastafarian who was able to amass a small library in his cell, he overcomes Alex’s resistance and insists that the teenager not remain ignorant of his culture. “If you don’t know your past, you won’t know your future,” he tells him. One of the books that the young man reads is mentioned in one of the earlier Small Axe films, The Black Jacobins by Trinidadian historian C.L.R. James. It is a history of the Haitian revolt against the French, and for the first time Alex reads of Blacks holding positions of power. Of his mentor he says, “He was the first person I came across who saw some promise in me.”

As Alex writes more himself and sees that he can have a future, he visits the government record department and steals his old file. But soon the film ends abruptly, leaving how he rose to national fame for us to discover. Thus the film turns out to be an origin story. With its many scenes of racism and police brutality, it fits into the series mosaic of ill treatment of West Indians. Not the strongest of the five films, it is nonetheless rewarding to watch. It instills hope, with both Alex and the policeman of the previous film, Leroy Logan, being awarded by the Queen the prestigious MBE. That honor should be vengeance enough for the two as they contemplate the racists who had demeaned them.

As a result I have a broadened understanding of systemic racism, realizing that “America’s Original Sin” extends back some four hundred years, but also, like the virus that some have compared it to, is not bound by any geographical border. And that humans, being innately desirous of freedom, will sooner or later rise up in rebellion when their freedom and dignity are denied. Having dealt with racism on this side of the Atlantic in Selma, Mr. McQueen turns the spotlight of his camera upon his own country in the most significant series of films produced in 2020. Alex Wheatle is a testament to the human spirit that rises above oppressive circumstances as well as an indictment of systemic racism.

The true story of famous West Indian-Brit writer Alex Wheatle, from his abused childhood to his prison term where he became aware of his heritage.
Editor Rating ★★★★★4.5 out of 5
More Details