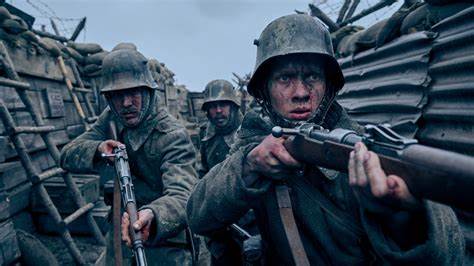 
He shall judge between the nations and shall arbitrate for many peoples; they shall beat their swords into plowshares and their spears into pruning hooks; nation shall not lift up sword against nation; neither shall they learn war any more.

Considered by many to be one of the greatest of all anti-war novels, Erich Maria Remarque’s 1929 book now has been adapted by three filmmakers, Edward Berger being the first German director to do so. The first version directed in 1930 by Lewis Milestone, won the Best Picture Oscar, and the second in 1979, made for TV, was also well received. So, you might ask, why a third version? The answer is that this is not a remake of the other films, but a going back to the source and then adding a stream of events not found in the book, but which greatly enhances Remarque’s anti-war message. Not seen in the earlier films–diplomats and generals who share none of the tribulations of the grunts in the trenches, and yet their whims and actions can cost the lives of thousands. Hence the added sequence. Co-scriptwriters Lesley Paterson and Ian Stokel have made a dark tale even darker!

In the Spring of 1917, three years into the First World War, 17-year-old Paul Bäumer (Felix Kammerer) and his school friends Albert Kropp, Franz Müller, and Ludwig Behm enlist in the Imperial German Army, lying about their age. A school official’s speech has filled their heads with visions of patriotic glory and noble deeds. When they receive their uniforms, they are unaware that the previous owners had all been killed (as we see this in one sad case in the film’s prologue). The woman who had cleaned and repaired Paul’s uniform forgot to remove the name tag, so when he sees the name “Heinrich” inside his tunic, he returns to the officer issuing the uniforms and says, “It already belongs to someone. “Yeah,” the officer lies, “it was too small for him. Happens all the time.”

Omitting the rigorous training sequence found in the book and two earlier versions, the filmmaker takes us directly to the truck transporting the boys toward the front lines. A doctor commandeers the vehicle, so they have to march on foot the last twenty-five miles. Paul is given the unglamorous job of collecting from the corpses of dead soldiers their dog tags that will be recorded by a clerk so that relatives can be notified. Amidst the mud and blood and the ruined No Man’s Land there is no glory to be found the youth soon discover. Indeed, one of them too soon becomes a corpse that will give up its name tag to some new recruit.

Paul and his school chums are befriended by veteran soldier Stanislaus “Kat” Katczinsky, whose advice helps them adjust to the tribulations of trench warfare. He injects a gallows-like humor, one time commenting upon their frequent charging the enemy, only to fall back so soon, “Paul, if we keep up this pace, we won’t have conquered France for 180 years. I worked it out.”

There are two scenes that will be familiar to those who have seen either of the earlier versions: the horrible encounter in a bomb crater when the lone Paul stabs a French shoulder, whose dying sounds he must endure throughout the long night; and the hauling of the wounded body of a comrade through the hell of a bombardment. In a new scene Paul and his comrades come upon the aftermath of a horrific tragedy. They have been searching for 60 young recruits who have failed to show up. Searching in an abandoned building, they find the missing soldier’s corpses—all had died painfully when they took off their gas masks too soon following a gas attack.

Interspersed throughout the trench scenes we see German official Matthias Erzberger (Daniel Brühl, playing a real person), concerned over the huge casualty rate. He suggests to the German High Command that they should enter into armistice talks with the Allied powers. The war continues to go against Germany, and in November of 1918 Erzberger and his colleagues are driven by General Friedrich (Devid Striesow) to a train that waits to transport them to a meeting with French General Foch and other Allied officials in the Forest of Compiègne to negotiate a ceasefire in the infamous railway coach.

The German delegates are taken aback by Foch’s refusal to negotiate—he merely hands over the demand for unconditional surrender. The Germans explain they must report back to Berlin, and when Erzberger asks for a ceasefire so that more lives might not be uselessly lost, Foch coldly refuses. The Frenchman also ignores the official’s warning that such a one-sided demand will lead the vanquished to hate the treaty. (A warning we know too well that proved prophetic, the harsh terms of the Versailles Treaty laying the groundwork for Hitler to take advantage of German discontent and rise to power.)

When the Germans grudgingly give in to the Allied demands, General Friedrich, obviously one of those who will unceasingly claim in the years ahead that Germany was betrayed by its leaders, decides to take action before the 11th hour on the 11th day of the month arrives, the date on which the guns are to fall silent. He wants to take back before the deadline a swath of territory so that it will fall to Germany. Fifteen minutes before the cease-fire hour he orders his troops to charge the enemy trenches. Thus Paul and his comrades are thrown into the carnage, with dire consequences, their end being different from the original two films only in its details. To add to the feeling of futility and the sense of the carnage being repeated over and over, the director provides a new ending to the story: another young recruit, freshly arrived, is ordered to collect the dog tags of the dead littering the trench, just as Paul had done earlier.

This is not a film to see when you are a bit down. There is no happy ending, nor can there be, the filmmakers assure us—not until what the prophet declared long ago comes about and swords are beat into plowshares and no one learns war any more. When the 1930 film was released, the critic for Variety wrote, “The League of Nations could make no better investment than to buy up the master-print, reproduce it in every language, to be shown in all the nations until the word “war” is taken out of the dictionaries.” It is little wonder that when the Nazis came to power they banned both the book and the film. As for us today, those who watch it or read the book will never be misled by those who loudly praise the “fatherland” and the glory and nobility of war.

Paul’s journey in the story is a downward one, from idealistic youth to savage killer, the latter made necessary for survival. It is not a pretty story, nor a comforting one. Paul’s story reminds me of that of a delightful teenager I knew and loved for four or five years when I served as a youth director at an inner city church. Donny came to church every day after school to participate in the after school program. His father was in prison and his mother was away at work all day, so he turned to the program and myself for solace and support. He became my shadow, eagerly helping out whenever he could, and sometimes getting into mischief. Years later he wrote me and hinted at the horrors of his experience in Vietnam. To his saying that he could never be forgiven for what he had done I wrote that God was indeed a forgiving one, but this must have seemed to him to be pious claptrap, because he never responded to the letters and notes I sent to him. I suspect that his the crushing experience of this American youth was very much like Paul Bäumer‘s.

Watching this film is draining. I can think of no better closing to this review than that of the traditional Christian response to the Confession of Sin, “Lord have mercy/Christ have mercy/Lord have mercy.”

The horrors of WW 1 trench warfare are on full display in a story of a German youth whose ideals are destroyed by the brutal fighting, as well as the indifference of upper class officers who never suf
Editor Rating ★★★★★5 out of 5
More Details