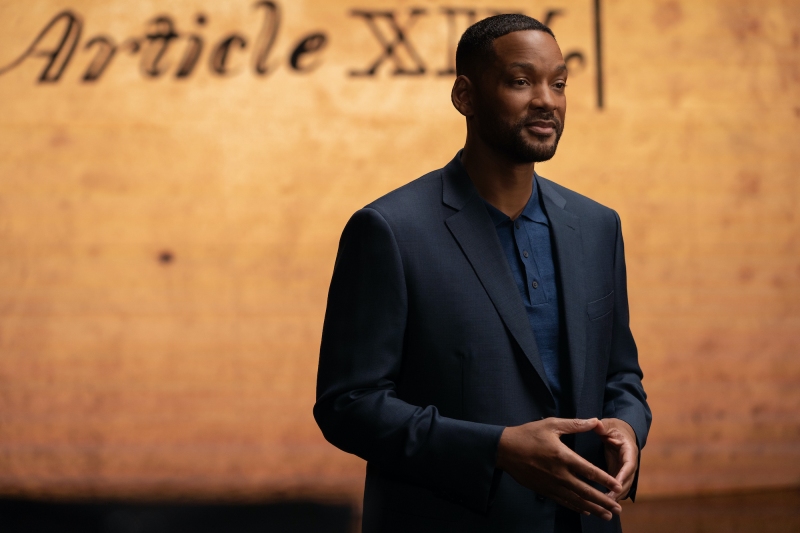 ... and you shall proclaim liberty throughout the land to all its inhabitants...

This is an excellent primer on a US Constitutional amendment that often is overshadowed by debates over the First or the Second Amendment rights. Robe Imbriano, creator and co-writer of this 6-part TV miniseries takes us on a journey into the past that truly illuminates the present. Host Will Smith and a groups of stars, scholars, activists, along with archival prints, photos and news group of stars, bolstered by the actors performing the words of important historical figures, help us understand important issues of citizenship and freedom crucial to our continued existence as a democracy.

The actors are effective in voicing the words of the famous people we see in the prints and photographs: Mahershala Ali speaks as Frederick Douglass, Joseph Gordon-Levitt as Andrew Johnson, Diane Lane as Earl Warren, Samira Wiley as Ruth Bader Ginsburg, Laverne Cox as James Baldwin, Pedro Pascal as Abraham Lincoln, and Randall Park as Robert F Kennedy.

Sitting at the crux of these key ideals, the 14th amendment is cited in more litigation than any other, including some of the US supreme court’s most well-known cases: Plessy v Ferguson, Brown v Board of Education, Loving v Virginia, Roe v Wade, Bush v Gore, Obergefell v Hodges. And because these noble notions are embedded in the 14th, it has the remarkable ability to generate both boundless hope (for the promises of that more perfect union aspired to in the constitution’s preamble) and crushing misery (for the failures to achieve such promises).

The 6 episodes center on a word that embodies the key concept or argument of the presentation:

At the end of the War in Defense of Slavery 4 million slaves were free but not a one was a citizen until the radical Republicans in Congress passed the 13th Amendment and a little later the 14th. Reconstruction promised a multiracial nation but there was resistance by whites in the North as well as the South, often violent. The struggle for equality began long before the Civil Rights Movement, but most whites said, “Wait, you’re pushing matters too fast.” And so on, this focusing upon one word being very effective.

I was a little put out that the man who forced the nation to consider slavery as an evil and who dragged the nation out of its silent refusal even to discuss the question is left out. I am referring to William Lloyd Garrison who declared in the first issue of his Abolitionist newspaper “and I will be heard!” Also left out was US Representative Thadeus Stevens and Senator Charles Sumners, two of the radical Republicans who were deeply committed to the welfare of the former slaves, as evidenced by their support of the 13th Amendment. It may be that the filmmakers omitted these two great advocates for equality because they wanted to emphasize Black leadership. This is understandable, but it means that a less than full picture of the struggle is given.

Despite the above misgiving, I wish everyone in the country could watch this otherwise excellent series. To have a better understanding of where we as a nation need to go, it is necessary that we know better the sad past from which we are emerging. I have benefitted greatly from the books I’ve been reading by Michael Eric Dysen and Ta Nehisi Coats, but even more from the narrative powerfully reinforced by the visuals of this and other such films. They moce us to take action–as Will Smith says at the conclusion of the series: “We have to choose to bring 14 to life.”

Sorry, I am already so late with this issue that I don’t have time to work on a set of questions. Let the leader take seriously the key word for eac h episode and ask participants to recall how that word was important in it

Will Smith, using graphics & actors, hosts this survey of the long struggle for Blacks to become full citizens, centering on the 14th Amendment to the US Constitution.
Editor Rating ★★★★★4.5 out of 5
More Details