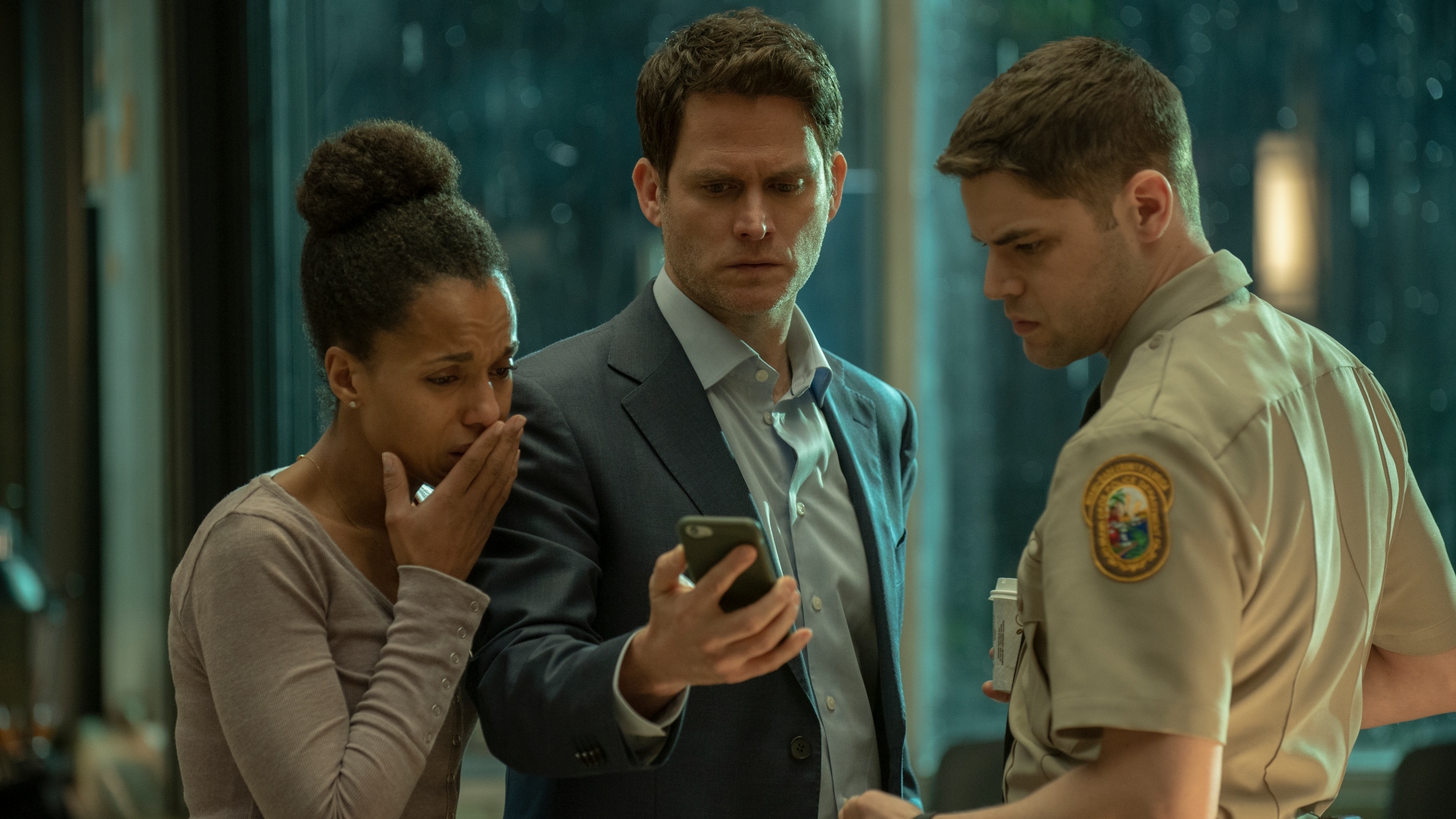 For he is our peace; in his flesh he has made both groups into one and has broken down the dividing wall, that is, the hostility between us.


Race is the child of racism, not the father.”

In this Kenny Leon-directed adaptation of Christopher Demos-Brown’s Broadway play race is the main “dividing wall” of hostility, but not the only one, as we shall see later. Although there are a couple of brief flashbacks that transpire outside the waiting room of a Miami police station, 99% of the confrontations take place indoors while a rainstorm rages outside. Thus, there is no escaping that this is a play, relying more on the spoken (or in this case, shouted) word than on visuals, even though the director does use some creative camera movement. Because of its “staginess” I believe that some critics have judged the film too harshly. American Son affords an opportunity to explore the fears of a black mother for her son, as well as the societal privileges and racial assumptions of white liberals. And more.

Kendra (Kerry Washington) has come to the police precinct in the wee hours of the morning because she is distraught that her 18-year-old son Jamal has not come home or answered the many messages she has texted him. He has never acted this way before, staying away so long and not answering her queries. She veers back and forth between anger and frantic worry.

The white rookie cop Officer Paul Larkin (Jeremy Jordan) is the only one on duty that night, and he refuses to divulge much information to her, claiming that he is not authorized to do so. Lt. Stokes (Eugene Lee) is on the way, he informs her, and he will be able to tell her more. However, like Godot, the detective has yet to show up. Kendra’s anxiety, bordering on hysteria, causes her to abandon her usual upper-class manners. She yells insults one minute, and pleads with Larkin the next, until he does tell her that the car Jamal was driving has been identified as involved in “an incident.” When he refuses to explain “incident,” she grows ever more upset.

If Kendra is so over aggressive that she invites hostility, Officer Larkin is too inexperienced to deal effectively with a hostile civilian, especially a black mother. He foolishly says that he understands her situation, even “I understand you perfectly.” Their class division is highlighted when to her description of Jamal she says that he loves the poetry of Emily Dickinson, the cop responds that he does too. Unfortunately, it is the first line of A Tale of Two Cities that he quotes. She tries to correct him that he is quoting Dickens, but he insists that he is correct. Larkin also is handicapped by his image of black teenagers as thugs, and so Jamal must have a record or be guilty of some infraction. She sarcastically declares that her straight-shooting son wouldn’t even tear off the tag of a mattress, leaving Larkin clueless as to her dark humor.

The quarreling pair are joined by a third party, but not Lt. Stokes. It is Kendra’s estranged husband Scott Connor (Steven Pasquale), a white man. When he reveals to Larkin that he is an FBI agent, the young cop immediately bonds with him, saying that his ambition is to join the FBI. He then reveals what he would not tell Kendra, that there is a report that Jamal was picked up with two other black males. This, of course, upsets Kendra, and during the often-angry back and forth between the couple, her husband defends the cop against her angry charges. During their interchange we learn that there are father-son issues over the boy’s following in his father’s footsteps by going to West Point. Every moment during their joint raising of the bi-racial boy the father had insisted on protecting their son, as he saw it, from his black heritage. Although he did give in once, withdrawing his desire to honor his Irish heritage by naming their son Sean and agreeing to the name of Kendra’s deceased brother Jamal, but virtually everything else he did was designed to cut off Jamal from anything black.

Kendra explains to Scot that of late Jamal had opened up to her, admitting that he did not want the life his father had planned for him. At the prep school where the boy was one of three blacks, he felt that he was forced to be the face of all African Americans. Kendra informs him that Jamal’s recent change to baggy, low hanging pants and cornrows was part of his rebellion, the only way he could articulate his questioning of his father’s choices.

The couple have entered deeply into their own broken relationship when Lt. Stokes finally arrives. He has a lot more news about Jamal, and as it unfolds, the couple see it is not good. Scot becomes so upset and belligerent that Stokes regards him as a threat and has him cuffed.

By the end of the film one might feel exhausted by the huge amount of emotion spewed out by the couple, as well as frustrated over the inability of the cops to empathize with the black mother. Stokes does articulate well in a passionate speech the viewpoint of a cop who every time he pulls a black driver over risks life and limb—his speech is all the more powerful because he is African American. The speech is triggered by Kendra’s angry denunciation that he is an Uncle Tom, when in reality, he passionately explains, he went into law enforcement to protect his people.

Scot is a good representative of the white liberal who becomes too cocky because he thinks he is beyond racism—after all, hasn’t he married a black woman? (There are a few tender moments when the couple set aside their bickering and recall how they first met.) From their arguing we can see that he had insisted on raising their bi-racial son “white,” rather than taking into consideration that Jamal, by virtue of his mother, was biracial. To Kendra’s horror, the racially loaded word “uppity” escapes his lips during one of his heated remarks to her.

At times this is not an easy film to watch, and it certainly is not one intended just for our entertainment. In a couple of scenes the word “preachy” might apply, but it is a sermon we need to hear and ponder. The dividing walls of hostility are many, and very very tall, but maybe, if enough filmmakers keep making such films, and enough concerned people support them, those walls can be breached. I should mention that the insightful script was written by a white man; this fact gives me hope that a person of a different culture can understand those of another, which is the beginning of the demolition of those walls.

I hope that leaders will search this one out and share it with others. With so many good new films it releases each month, the monthly Netflix subscription is a good buy!