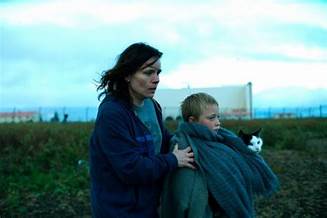 
And no stranger ever had to spend a night in the street;
my doors were always open to travelers.


But a Samaritan while traveling came near him; and when he saw him, he was moved with pity. He went to him and bandaged his wounds, having poured oil and wine on them. Then he put him on his own animal, brought him to an inn, and took care of him.


In English and Icelandic with English subtitles

The conflict over immigration and protecting a nation’s borders is not just an American concern, as this dramatic film by first time Icelandic director Ísold Uggadóttir shows. At the 2018 Sundance Film Festival it won the Best World Cinema—Dramatic Award, and elsewhere in this country, and in addition, in Europe and the Middle East, it has been honored with many awards. The film is similar to Chasing Freedom in that it is about the plight of immigrants and its two protagonists are women. However, this film is very different in pace and depiction. Ms. Uggadóttir’s is a slower paced film, her camera lingering on a scene after a character has departed. Also, a great deal of the background stories has unfolded off camera. This film in which God (or Destiny) brings two women from different cultures and countries together will challenge and stay with you long after you have turned off your screen.

Near the beginning of the story single mother Lara (Kristín Thóra Haraldsdottir) and her young son Eldar (Patrik Nökkvi Pétursson) are at an animal rescue shelter choosing a cat. The boy asks his mother about the cats, “”Why do they have to live in cages?” His question sets the stage for the rest of the story. The humans we will follow are just as inhibited in their lives by circumstances as the cats are by their walls of their cages. Already we have seen at a grocery checkout that Lara is so short of money that she has to take out an item, so it is no surprise that she is distressed at the expensive fee required to acquire the cat. The caretaker explains the reasons, and then, apparently understanding Lara’s predicament, kindly says that they can settle up later.

Somehow Lara has secured work as a border security officer at Iceland’s Keflavic airport. Still on probation, she sits beside a seasoned officer to learn the ropes, watching as he examines the passports of travelers. When he misses a detail about one woman’s passport, Lara calls his attention to it. It belongs to Adja (Babetida Sadjo), an asylum-seeker from Guinea-Bissau who is attempting to travel to Toronto. The unfortunate woman is taken out of line for questioning about the forged document and then sent to a detention center where she is one among many of refugees attempting to flee their countries on forged passports. Lara’s keen eye will benefit her in regard to her evaluation, but it will disrupt the life of the traveler, perhaps tragically.

The two women will come together much later in the film when Lara and Eldar are homeless. Apparently falling behind on their rent, Lara is forced to pack up her belongings and send them to a storage center. She wants to shield her son from the shame of eviction, so she tells him they are going on a fun adventure. The boy must be a first grader to swallow such a story, but with his cat for comfort, he accepts their situation, which includes sleeping in their car when a man to whom Lara turns (her ex?) informs her that her old room is now occupied. He offers to work something out, but she sees a party is going on, and so returns to her car and drives off. She parks on an isolated road next to the fence of the airport—also close to Eldar’s school.

Eldar wakes up first the next morning to let his cat out to relieve itself. Of course, it wanders away. The boy sets off to find it. When the mother wakes up, she is frantic that both her son and cat are gone. She searches in the wrong direction and then drives off to see if he has gone to school by himself. At last, as she drives around the airport’s perimeter, she spots Adja, the boy, and the cat. After a perfunctory Thanks you, Lara drives off with Eldar, but upon his prompting, offers Adja a ride.

Eventually the refugee invites the family to bunk with her. She sneaks the three into her room. Over the next few days, the two women become better acquainted, with Lara, whom we discover is herself originally from Norway, growing in understanding of the plight of those whose papers she examines each day at the airport. An immigrant herself, she is now one of the insiders when her probation period at work ends successfully. Adja,  also revealed to be a mother, is not so fortunate. Though we learn from a photo that her best friend back in her native land was killed, and thus she is in danger too, her request for asylum is denied. She has no way of proving that her life is in danger.  It will take an act of risky grace to save her from being sent back to a probable death.

This spare film not only takes up the cause of the victimized refugee, but also affirms the value of hospitality and above all, of grace. Like the Samaritan in Jesus’ parable, Adja invites Lara and Eldar to share her room. Shelter is the only thing she has to offer, and this she does freely, even though Lara is the one who had caught her with the illegal passport. This favor will later be returned when Lara is in a position to reciprocate. Besides these gracious acts are many smaller moments of grace—the stranger in the grocery store offering to pay the difference between Lara’s bill and what money she has; the woman at the animal rescue shelter; and the incident at school where Eldar’s teacher has discovered Lara’s drug in the boy’s knapsack—Lara has struggled with her addiction successfully, but kept the small remainder of the drug “just in case.” Fortunately, Adja, who had brought Eldar to school that day and claimed that it was hers. In addition, the teacher tells Lara that she will not call the police, even though the regulations require this.

And Breathe Again  is one more example that the film industry in Iceland is thriving—remember Metalhead? I am so impressed by this little gem that I cannot recommend it too highly. Let us hope that on the basis of the film’s success that Ísold Uggadóttir finds the support to grace us soon with another film so full of insight and delight.

The story of 2 mothers, one a Icelandic Border Police trainee, & the other an African refugee caught trying to fly using a forged passport, a story full of grace and compassion.
Editor Rating ★★★★★5 out of 5
More Details