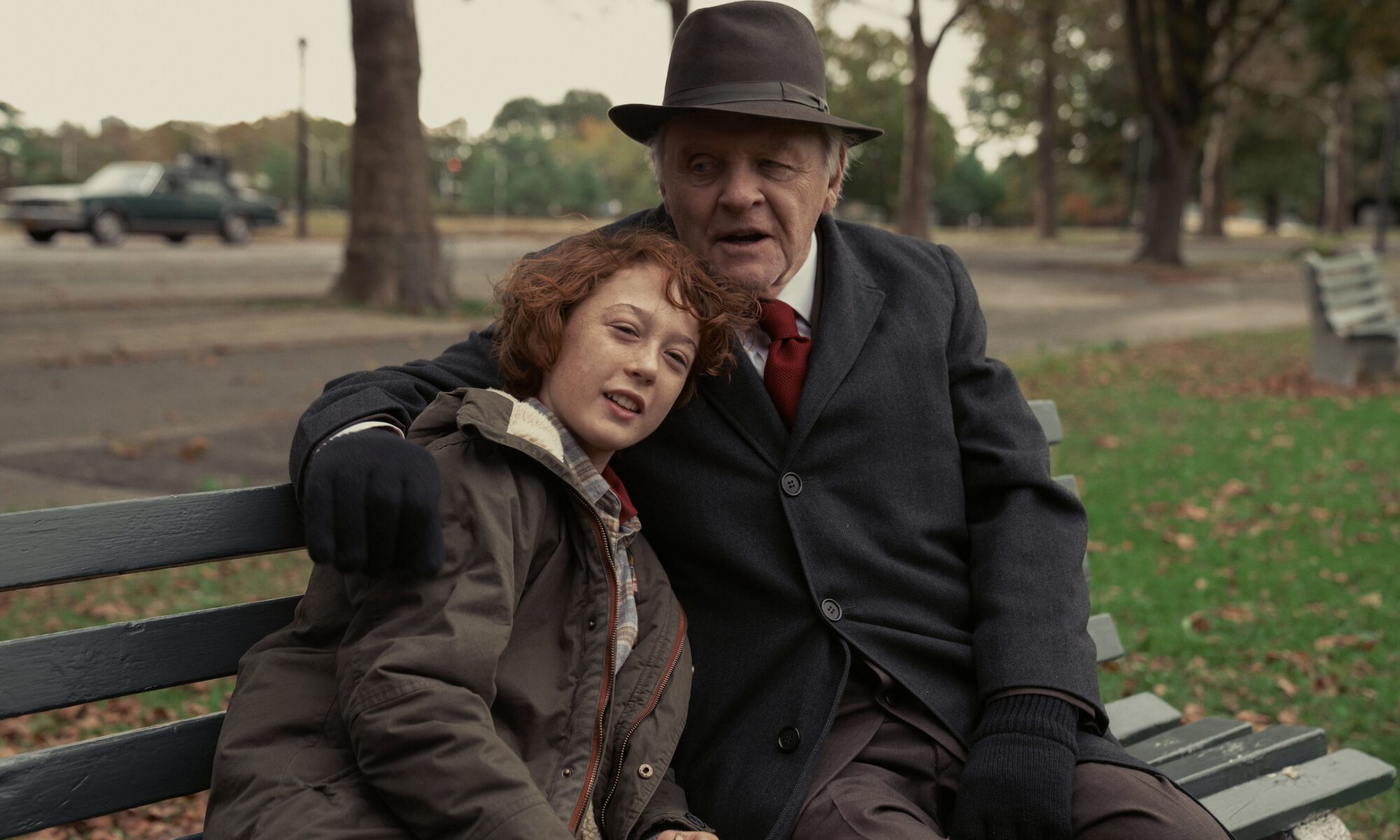 
Don’t let the world around you squeeze you into its own mould, but let God re-mould your minds from within, so that you may prove in practice that the plan of God for you is good, meets all his demands and moves towards the goal of true maturity.

Eleven-year-old aspiring artist Paul Graff (Banks Repeta) is the protagonist in this semi-autobiographical coming-of-age memoir movie set in Flushing, Queens, New York, in 1980 during Ronald Reagan’s campaign for the presidency. His secular Jewish family includes his maternal grandfather Aaron Rabinowitz (Anthony Hopkins), with whom Paul has an especially close relationship. It is Aaron alone of the family members who encourages Paul’s dream of becoming an artist. Thus James Gray’s film, written and directed by him, might call to mind Barry Levinson’s wonderful Avalon, although the new film is far more about race, class, assimilation, and white privilege.

At the beginning of the first of many scenes in a class room I thought this would be one of those caring teacher films, but was quickly disabused by Mr. Turkeltaub (Andrew Polk), who turns out to be a jerk. On the first day of his 6th grade Paul draws a caricature of Mr. Turkeltaub that gets passed around to the amusement of his classmates. When the teacher gets hold of it, instead of being amused or impressed by the talent of its creator, he gets upset, ordering Paul to stand next to the blackboard. Then the lone African American in the class, Johnny (Jaylin Webb), also acts up. He too is called up front as punishment, but both can hear the racist teacher mutter “animal” at him as he passes by.

The two outcasts quickly become friends. When Johnny says that he will not be going on the school trip to the Guggenheim Museum, Paul says he will get him the money, that his family is “rich.” Actually, “rich” only in comparison to Johnny’s, which consists only of his sick grandmother. The middle class Graff’s live in a two-story brick duplex house where the whole family often gathers for supper. There are both sets of grandparents, and Paul’s father Irving (Jeremy Strong), a plumber with a kind heart but when crossed, his fierce temper turns him cruel, as we will see. Paul’s mother Esther (Ann Hathaway) often seems harassed by all the family talk while she, with no one offering to help, prepares and serves the family meals. She still finds time to serve as PTA President at school, and even hopes to run for the School Board. Also at the family table is Paul’s bratty high school-age brother Ted (Ryan Sell), who treats him disdainfully.

Paul obtains money for his friend by stealing from the stack of bills his mother hides in her jewelry box. The boys enjoy the Kandinsky display at the Guggenheim, Paul drawn by a particular work which he later copies in his art class at school. The two friends sneak off and explore Manhattan together—seemingly with no consequences from school authorities or parents. There are plenty, however, when the two are caught enjoying a reefer in the school bathroom. The enraged Irving beats his son with his belt and forbids Paul to have anything to do with Johnny. The parents even enroll Paul in the exclusive private school despite his strident objections. In the school hallway Paul is trying to figure out where he should go when he is accosted by a stern old man who grills him about his past. When the boy admits his original Jewish last name, the stranger snorts in triumph, saying that he thought as much. We learn that this is Fred Trump (John Diehl), a school benefactor, sharing the school-wide prejudices that include antisemitism and racism. Later his daughter Maryanne Trump (Jessica Chastain) will make an address to the class that oozes with smug white privilege sentiments such as that they deserve the success that their hard work will bring.

Johnny, missing his friend, shows up at the school to speak with him during recess time, the iron fence serving as physical proof of the barrier imposed by parents and society upon them. Paul is ill at ease during their conversation, knowing that other boys are casting hostile glances at them. After Paul dismisses his friend, several students confront Paul, one of them spewing forth the “N” word. Another one assumes that neither he nor Paul could ever have one in their home as a guest. Paul shares the incident with Grandad, and the old man asks what he did. Paul admits that he did nothing. The old man admonishes him to speak up, to stand up to injustice, ending by urging him, “Be a mensch.” Paul agrees to do so, but…

Johnny and Paul meet several times, the Black youth leaving home when his grandmother slips into dementia and Human Services want to take him away to a foster home. Paul gives him shelter in the club house his father had built for him. The fugitive boy is amazed at such a luxury. Clinging to his dream to become a NASA astronaut, Johnny talks about fleeing to Florida where somehow he can fulfill his dream. Paul decides to join him so he can pursue his own dream of becoming an artist. He shares an idea of how they can obtain the money to get to Florida, even though it is risky. At first they are successful, but reality quickly closes in upon them, with the police arresting them.

At the police station Paul at first admits to sharing responsibility for the theft. His grandfather’s words are fresh in his mind. But then his father shows up. No one comes to the aid of Johnny. The arresting cop has a past relationship with Irving, so he tells the father he will not press charges on his son. James by now is well aware of the white privilege of his friend and does a noble thing that no one, other than the two friends, will credit to him. Their paths diverge, one upward, and the other downward, the two destined never again to meet.

Paul’s family, although Jewish and thus having suffered greatly in their past in Europe, is considered white, and thus privileged. They are liberal in their politics—we hear Irving making a despairing remark about Reagan, and yet during their talk at the family dinner table one of the grandmothers makes a racist remark. Paul’s harrowing experience at the police station forces him to realize how weak good intentions can be when faced with the consequences of doing the right thing, as advocated by his grandfather.

Irving has a frank conversation with his son in their car that is bound to sadden sensitive viewers. The father admits that what is unfolding with Johnny is unfair, but that this is the way the world is. One just has to accept this. His acceptance of this is a far cry from Grandfather Aaron’s admonition to become a mensch. Unfortunately, the grandfather is no longer present to mentor the guilt-ridden boy. But apparently his imprint on the boy, though overcome by circumstances, was not entirely erased, because we have James Gray’s film based on his similar childhood.

The film’s title comes from something that Ronald Reagan said about facing a “moral Armageddon,” as well as the Clash song used on the soundtrack, “Armagideon Time,” with one line declaring, “A lot of people won’t a-get no justice tonight.” The filmmaker might have captured Irving’s doleful acceptance of the sad status quo had he also inserted into the soundtrack the Beatles’ “Nowhere Man.” Nowhere is where Paul seems to be headed in this coming of age film that focuses upon a boy’s moral awakening rather than the usual sexual one favored by most filmmakers. The miracle is that the weak-willed Paul grew into the filmmaker who created such an intriguing study of white privilege. Whether it serves as a confession and an atonement for allowing the “world to squeeze” him into its own mold at that police station, I will leave for you to decide.

Paul's beloved grandfather urges him to speak up for his Black classmate but the boy finds it difficult to stand against entrenched racism.
Editor Rating ★★★★★4.5 out of 5
More Details