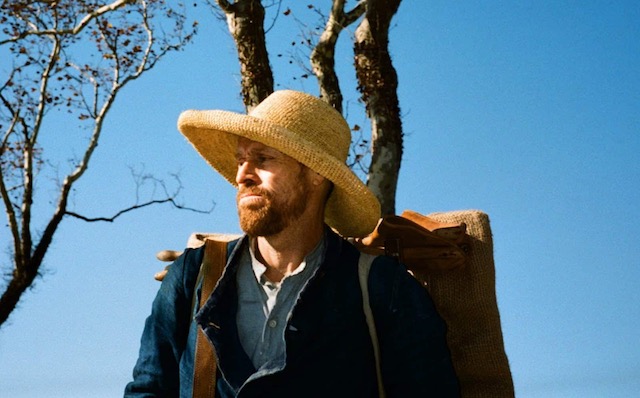 Praise him, sun and moon;
praise him, all you shining stars!
Praise him, you highest heavens,
and you waters above the heavens!


Then he went indoors, but again such a crowd collected that it was impossible for them even to eat a meal. When his relatives heard of this, they set out to take charge of him, for people were saying, “He must be mad!”

With its theology-related title, At Eternity’s Gate should appeal to fans of the Dutch painter Vincent van Gogh. This is the fourth film about the artist that I have seen, beginning with Vincent Minnelli’s Lust for Life way back in 1956, which stressed the misunderstood and tormented artist aspect of the artist’s life. Robert Altman’s Vincent and Theo (1991), as its name indicates focuses upon the relation of the two brothers. Last year’s fabulously hand-painted animated Loving Vincent was couched like a mystery with the son of a man painted by Vincent journeying to Auvers-sur-Oise to understand the painter and how the mystery surrounding his death.

In the asylum where Vincent spent the last weeks of his life the priest (Mads Mikkelsen) who is to evaluate his fitness in regard to his release looks at one of the artist’s small paintings as they talk. It is a small canvass of two rabbits in a colorful yellow and green field. Even before the cleric declares it is ugly, he shows by his several glances that it is repugnant to him.

That conversation is important for people of faith because it makes explicit the artist’s spiritual outlook on the world. Earlier Vincent had identified with the world’s outsiders, “I just wish I could be one of them…” He went on to speak about going about ordinary mundane affairs, longing to fit in, rather than stand out. He also described his act of painting as making him feel a part of everything, inside and outside of himself. To the priest he draws parallels between Jesus and himself. “No one knew he was alive until 30 years afterward.” Mentioning how careful Jesus had to be while being interviewed by Pilate, he says, “I too have to be careful what I say to you.” He might also have pointed out that Jesus was charged with madness. (Though only in Mark’s gospel—was this too sensitive a subject for the other writers to mention?)

In his painting which gives its name to this film, Sorrowing Old Man (At Eternity’s Gate) van Gogh depicts an old man burying his eyes in his hands  as he sits in a chair, hence the first part of the title “Sorrowing Old Man.” But the second part of the title “At Eternity’s Gate” takes us beyond the sorrow, the painter showing his faith in God and a hereafter. He commented on a print based on the work:

“It seems to me that a painter has a duty to try to put an idea into his work. I was trying to say this in this print — but I can’t say it as beautifully, as strikingly as reality, of which this is only a dim reflection seen in a dark mirror — that it seems to me that one of the strongest pieces of evidence for the existence of ‘something on high’ in which Millet believed, namely in the existence of a God and an eternity, is the unutterably moving quality that there can be in the expression of an old man like that, without his being aware of it perhaps, as he sits so quietly in the corner of his hearth. At the same time something precious, something noble, that can’t be meant for the worms. … This is far from all theology — simply the fact that the poorest woodcutter, heath farmer or miner can have moments of emotion and mood that give him a sense of an eternal home that he is close to.”

My notes of the interview by the priest are jumbled because of trying to write in the dark, but as I recall, Vincent’s most notable words are, “Maybe God made me a painter for people who aren’t born yet. Life is for sowing. The harvest is not here yet.” Immediately I thought of the tear-inducing excerpt from Dr. Who that many fans have posted on You Tube in which an art expert is induced to declare the Dutchman as the “world’s greatest artist” within ear shot of the artist himself.

The director admits to using conjecture, which we see in two incidents. Along with Dorota Kobiela and Hugh Welchman’s in their Loving Vincent, Schnabel accepts the speculation that Vincent did not commit suicide but was murdered by a local youth. This is still in dispute among van Gogh scholars, as is the conclusion that van Gogh did draw the sketches in a drawing book that Madame Ginoux gave him in Arles. His doctor supposedly returned it to her, and she shelved it without looking at it. It was only decades later that the 65 drawings were discovered, and in the 21st century published as Vincent van Gogh: The Lost Arles Sketchbook. However, the Vincent van Gogh Museum in Amsterdam has declared that the drawings are all fakes. I guess Schnabel preferred the more romantic, as well as ironic, fiction of the valuable sketches lying on the shelve undiscovered for all those years.

Regardless of the truth of the above two sequences, Schnabel provides us with a wonderful exploration of art and the world as seen through the eyes of a sensitive genius who hugely influenced us all to see the world as full of the beauty and the holiness of the divine. That he was haunted by madness is both a tragedy and a portal into a vision that others would appreciate after his death. In reference to his statement above, he did the sowing, and generations since have been blessed with the reaping. This is a film worth traveling many miles to see, giving you a deeper appreciation of this creator of so much beauty. Like Mozart, he would not reach 40, but what a legacy he left to the world!

Note: For a beautifully illustrated article on the artist go to Wikipedia’s “Vincent van  Gogh“.

The film focuses upon the last of painter Vincent van Gogh's troubled life in southern France and at an asylum.
Editor Rating ★★★★★5 out of 5
More Details