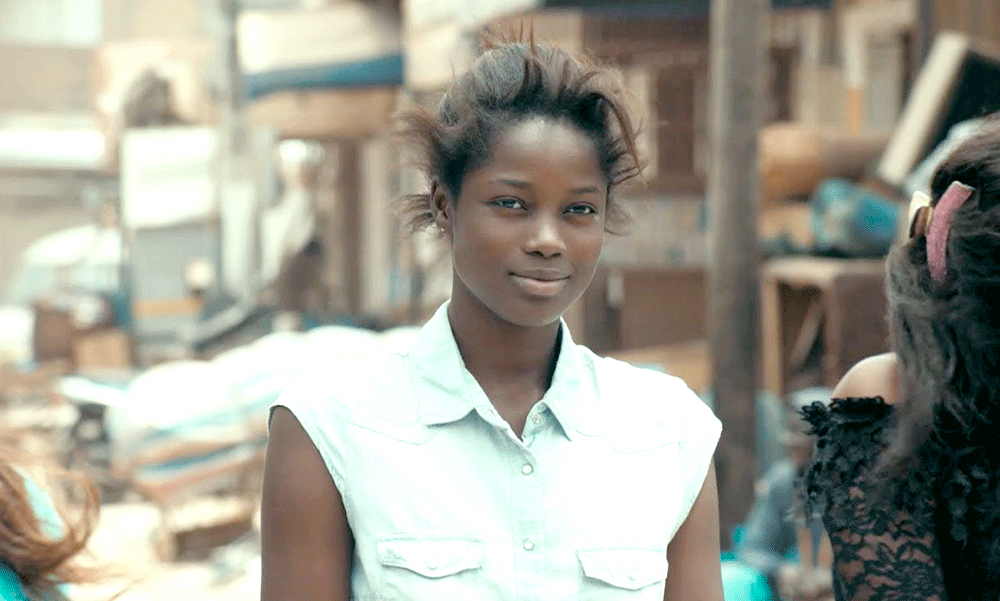 You shall pay them their wages daily before sunset, because they are poor and their livelihood depends on them; otherwise they might cry to the Lord against you, and you would incur guilt.


But many who are first will be last, and the last will be first.

I came across French/Senegalese director Mati Diop’s film, set in Dakar, while browsing through Netflix’s New Releases. I clicked on this title because it looked interesting, not knowing anything about  it or Ms. Diop. I suggest that you do the same and stop reading at the end of the next sentence and go watch the film on the Internet. If you do so, you will enjoy the surprise of entering fresh territory in which the mysterious exists side by side with the familiar

At first, I was a bit uneasy by the shifting mood of what seemed like a social justice film combined with a love story that slowly morphed into something quite different. The film opens with extended shots of men working on a large construction project in Senegal’s capital, Dakar. Through the polluted air we see a huge futuristic tower looming over the site. Inside the crowded construction office angry men demand their pay from the foreman. It has been three months since their last paycheck. They have families to support. One of them shouting such claims is Souleiman (Ibrahima Traore). He has no family but would like to start one with his girlfriend Ada (Mama Sane), but she resists his premature attempts when they kiss by the seaside, telling him she has to go home. Daughter of an observant Muslim middle class couple, she faces a dilemma because they have promised her hand in marriage to Omar (Babacar Sylla), scion of a wealthy couple. Ada’s conservative friend Mariama (Mariama Gassama) chides her for not being enthusiastic for the impending marriage.

Ada parts from Souleiman with the promise of meeting him later that night at their favorite beach, a bar presided over by the entrepreneurial woman Dior (Nicole Sougou). She and all the others may be Muslim, but they have no qualms about drinking alcohol, dancing, and wearing jeans and other items of Western clothing—though a few of the women do wear head scarves, and the 17-year-old Ada drinks fruit juice. Climbing out of the window of her room after supper, Ada goes to the bar, only to find there is no Souleiman waiting for her, nor any other men. Her friends tell her that the men, tired of fruitlessly demanding their wages, piled into a small boat and set sail for Spain, where they hoped to find new jobs. We now realize that the gift of a small necklace was Souleiman’s way of saying Goodbye to her at their parting.

With no word coming from the men, it is assumed that they had met the fate of so many economic refugees, drowning at sea. Plans proceed for Ada’s marriage, with the grieving girl unable to express her sorrow to her family. Like a cork bobbing along in a stream, she complacently endures the preparations and the ceremony, followed by the elaborate party in the immaculate new mansion the pair will live in. Her solemn face is quite a contrast to the happy ones of her friends and other guests as they Ooh and Ahh their way through the rooms during the open house. They so admire everything that they fail to recognize how horrible looking is the huge marriage bed, a grotesquerie in the style of King Louis IVX. One of the girls exclaims that the bed is so big that one could hold an orgy in it. Mariama  tells Ada that she thinks that she glimpsed Souleiman in the crowd. Shortly after this a fire breaks out. The flames are contained to the bedroom, but not before leaving the gauche wedding bed a charred wreck.

The following scenes tumble one after another, the tense feeling generated by the events also creating a sense of puzzlement as to what is taking place. Ada is convinced that her lover is still alive, as does the young, illness prone police inspector Issa (Amadou Mbow). Assigned to investigate the arson, he dons gloves and looks closely over the bed and around the room. He is convinced that Ada is in league with her lover, and so detains her for questioning. She is released but refuses to live with Omar. He shows little feelings toward her, being far more concerned about his rights as a husband than expressing to her any personal signs of love—although for a while he does give her expensive presents.

Strangest to understand at first is what happens to Ada’s friends. They gather at night, their eyes now vacantly white, making them appear as they march through the mist-shrouded streets like a band transferred from one of the popular zombie series. They invade the mansion of Mr. N’Diaye (Diankou Sembene) and demand that he pay them the wages he has unjustly withheld from their lovers. In a second night-time scene, in the gothic setting of a graveyard, the ghost-inhabited women, all staring through whitened eyes, have the wages due their men, but extract further justice on the corrupt businessman by forcing him to dig their graves. If we at first wondered why the women say “us” in their demands for back wages, by now we realize that the ghosts of the dead come back at night to inhabit their bodies. This reminds us of the belief that a ghost is a spirit that refuses to move on because the person has unfinished business that it  strongly desires to resolve. (Remember The Lovely Bones?) In the scene in which Ada encounters Souleiman he describes the storm and how when they first saw the wave that swamped their boat, it looked like a distant mountain.

Mati Diop blends social justice realism with a love story and a ghost tale, resulting in a viewing experience that is puzzling at first, but ending with a satisfying reversal, much as some Biblical stories do. The high  and mighty are brought low, and the poor and lowly lifted up, the first becoming last, and the last, first. There are gaps in the narrative, so it is best not to ask why a wealthy family such as Omar’s would want to form a marriage alliance with Ada’s lower middle-class ones. But this is a minor qualm, the film otherwise so well crafted, from its camerawork and musical score to the good acting by its mixed professional and amateur cast.

From the start, with its well-planned shot at the opening showing the teeming slum on the right of the screen that contrasts with the huge luxurious tower on the left, the edifice destined to provide abodes so the rich can literally look down upon the poor—this marks the film as the work of a newcomer so talented that she was invited to enter her work into competition at the 2019 Cannes Film Festival. Hers is a feminist call to female solidarity and a condemnation of callous capitalist exploitation of workers that drive them to set forth on dangerous voyages seeking economic relief. Throughout her film the shots of the ocean waves ceaselessly rolling in remind us that her people have regarded the sea as a means of escape, the film pointing out that for too many escape means death.

This is a film well worth sitting and puzzling through. The only one I can think of that it resembles is Jordan Peel’s ghost story Us. If you appreciated that somber tale, you will this one as well. I wonder how well it is playing in Europe where resentment against African refugees has risen to heights similar to the anti-immigrant fervor in the U.S. Ms. Diop humanizes this issue by focusing not upon the refugees themselves, but upon the lovers they left behind. We, and European audiences need to become aware that for every immigrant body dredged up from the sea there are many grieving loved ones left behind. And they have faces, like those of Ada, Mariama, Dior, and the rest of the girls in this haunting film.