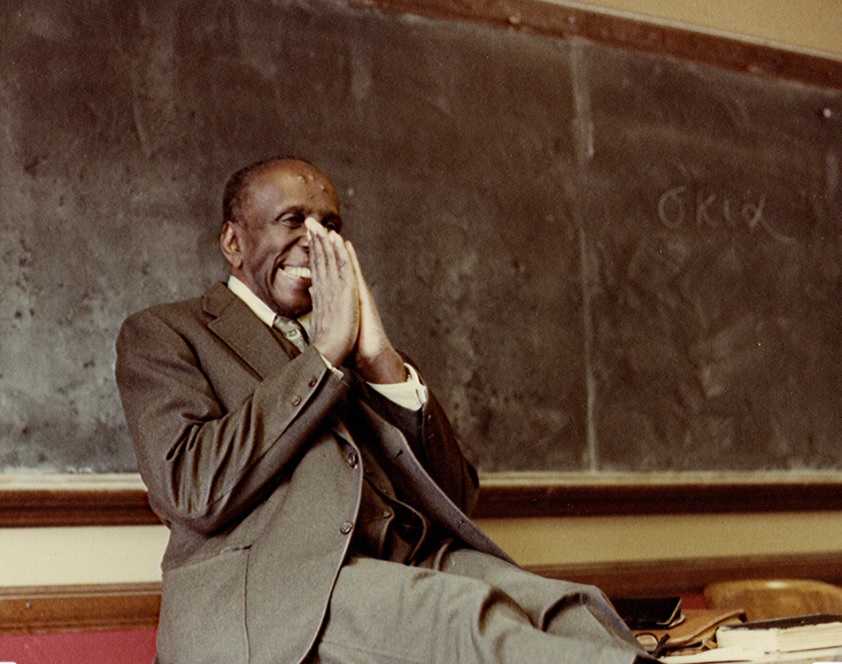 Wash yourselves; make yourselves clean;
remove the evil of your doings
from before my eyes;cease to do evil,

learn to do good; seek justice,
rescue the oppressed, defend the orphan,
plead for the widow.


When he came to Nazareth, where he had been brought up, he went to the synagogue on the sabbath day, as was his custom. He stood up to read, 17 and the scroll of the prophet Isaiah was given to him. He unrolled the scroll and found the place where it was written:

“The Spirit of the Lord is upon me,
because he has anointed me
to bring good news to the poor.
He has sent me to proclaim release to the captives
and recovery of sight to the blind,
to let the oppressed go free,
to proclaim the year of the Lord’s favor.”

Martin Doblmeir bolsters his reputation as being the premier director of spiritual biographies with his new film exploring the life and teachings of African American pastor/theologian Howard Thurman. This one-hour documentary is scheduled for airing on PBS early in 2019, a worthy successor to such films as An American Conscience: The Reinhold Niebuhr Story; Albert Schweitzer: Called to Africa; Bonhoeffer: and numerous others (my favorite being his magnificent The Power of Forgiveness).  For the younger generation who might not be familiar with this great writer who mentored such African American Civil Rights leaders as Martin Luther King, Jr., the film will serve as a great introduction, hopefully inspiring viewers to go on to read some of his classics such as Deep River and Jesus and the Disinherited.

The film maker has assembled a virtual platoon of men and women who have studied and written about this influential leader, even one or two who knew him personally (Thurman died in 1981). The following, speaking movingly about him, include:

-Theologians–Barbara Brown Taylor and Luther E. Smith, Jr. the latter Professor Emeritus of Church and Community at the Candler School of Theology at Emory University

-Alton B. Pollard, III–president and professor of religion and culture at Louisville Presbyterian Theological Seminary

-Peter Eisenstadt, Ph.D.– historian of American religion and history and co-author (with Quinton Dixie) of Visions of a Better World: Howard Thurman’s Pilgrimage to India and the Origins of African-American Nonviolence

-Gregory C. Ellison, II–Associate Professor of Pastoral Care and Counseling in the Candler School of Theology at Emory University

-Lerita Coleman Brown– the Ayse I. Carden Distinguished Professor Emerita of Psychology at Agnes Scott College and a spiritual director whose particular focus is the life and work of Howard Thurman

Add to these Anton Howard Wong, a grandson of Dr. Howard Thurman and a registered architect in New York City.

This is such a large number of Thurman enthusiasts that you might fear that the result is a confusing film, hard to follow. Do not fear. The director has done a masterful job of interweaving their reflections and comments throughout the film as, together, they tell the story of the grandson of a slave who rose to national prominence during the first half of the 20th century when Jim Crow ruled the South and the unwritten Jim Crow customs in the North kept the African American in “his place.” Fortunately for the world, Howard Thurman saw his rightful place far above his assigned status and possessed the will, the courage and genius to rise to it.

Born in 1899 in Daytona Beach, Florida, where his father died when he was seven, he was raised by his grandmother because his mother had to work long hours for their financial support. The older woman profoundly influenced his life by her deep faith and her perceptions of life gained from her years of slavery. She passed on her instilled sense of dignity in her story of the plantation preacher who, no matter the subject of his sermon, always ended with the declaration that, “You are not slaves. You are not niggers. You’re God’s children!”

In 1925 he graduated from Morehouse College where Martin Luther King senior was a classmate, and then from Rochester Theological Seminary, serving as pastor of a Baptist church in Oberlin. He spent a year at Atlanta’s Morehouse and Spelman’s College teaching philosophy and religion. Drawn by the writings of the Quaker Rufus Jones, he spent the spring semester of 1929 at Haverford College as a special student, imbibing the mysticism and philosophy of non-violence of the great teacher, who had spent time with Gandhi.

A few years later Thurman would deepen his understanding of non-violence from its source, Mohandas Gandhi when in 1935 he led a group of African Americans on an extensive trip to India. At the end of his cherished time with Gandhi, the Mahatma sent him off with the famous, prophetic statement, “It may be through the Negroes that the unadulterated message of nonviolence will be delivered to the world.”

Indeed, it would be, as when Thurman was dean of Marsh Chapel during the 1950s one of the students who fell under his sway was Martin Luther King, Jr. In addition to his social justice teachings, Thurman was also an innovator in worship, welcoming the arts into the liturgy. This included liturgical dance, much to the consternation of a few traditionalists averse to the new. He had done the same, before coming to Boston, at the Church of the Fellowship of Reconciliation which he had help found i944 in San Francisco. This was the nation’s first intentionally multiracial congregation, begun in opposition to the infamous observation that “Sunday was the most segregated day of the week.”

Dr. Thurman continued to influence Dr. King as he rose to national prominence by traveling to the New York hospital where the Civil Rights leader was recuperating from his near death at the hands of a crazed, knife-wielding woman during a book signing. He advised the leader to use the time of recuperation as a God-given opportunity to reflect on his leadership role, lest he be swallowed up in a ceaseless round of activities. Dr. King took the advice, as he reported in one of his letters to his mentor. It also is said that during the days of the Montgomery Bus Boycott he kept his worn copy of Jesus and the Disinherited in a coat pocket for easy reference.

There is more, much more, in the film, some of the best being clips of Thurman himself speaking, and then noted actor Keith David serving as his voice-over in numerous scenes. The film’s title comes from the author’s statement in his book Jesus and the Disinherited, “The masses of men live with their backs constantly against the wall. They are the poor, the disinherited, the dispossessed.” The film shows well that much credit for what progress has been made in the uphill battle for racial equality is due to this great teacher/mystic who worked behind the scenes to influence those who stormed the intrenched barriers of privilege and power.

Part of my enthusiasm for this film is that from the beginning of my ministry Thurman’s slim book DEEP RIVER: Reflections on the Religious insight of certain of the Negro Spirituals has informed my thought and ministry. Although never fortunate to hear him speak aloud before he passed on in 1981, he spoke to my heart and soul through the wise words about suffering, persevering, and resisting injustice contained in its pages. Now I can see and hear him in Martin Doblmeir’s film. You can too. And so, it is appropriate during this Advent Season when “watch” is a key word, to urge you to watch the January schedule of your local PBS station for the advent of this powerful film.

Journey Films has posted an excellent discussion guide, so rather than write one myself, I am recommending theirs. Google Journey Films and click onto the film title.

The life of teacher/preacher Howard Thurman is explored, with emphasis upon his influence on MLK, Jr. & other Civil Rights activists.
Editor Rating ★★★★★5 out of 5
More Details