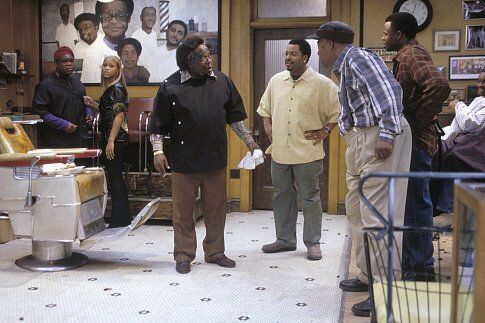 Because of its relevance to The Hate U Give, this review of the 2002 film Barbershop is appearing here for the first time (though reviews of the two sequels were included when they came out). In Hate the father and mother  clash over whether to stay in the ghetto or move, a decision that Calvin in Barbershop struggles with–and which Mr. Lewis, the barber next door to Maverick’s grocery store in Hate, must also have faced.

I have also seen this example of wisdom under the sun, and it seemed great to me.  There was a little city with few people in it. A great king came against it and besieged it, building great siege works against it. Now there was found in it a poor wise man, and he by his wisdom delivered the city. Yet no one remembered that poor man.  So I said, ‘Wisdom is better than might; yet the poor man’s wisdom is despised, and his words are not heeded.’

The quiet words of the wise are more to be heeded

than the shouting of a ruler among fools.

Wisdom is better than weapons of war,

but one bungler destroys much good.

Was lost but now am found.

The fathers of both Charlie Brown and Charles Schultz were barbers—and each remembers them with fondness the warmth and feeling of acceptance that filled their fathers’ shops. Not so in the case of the character played by Ice Cube in this funny and insightful comedy. Calvin is the third generation of his family to run the Barbershop on Chicago’s south side, and he fervently hopes to be the last. Regarding it as his ball and chain, he is constantly pursuing hare-brained schemes to escape its stifling confines. To the disgust of his wife, who cherishes the shop, fondly recalling his kind-hearted father ensconced there for so many years, Calvin is currently trying find the money to set up a basement recording study. He imagines that the platinum hit by some yet unknown rapper emanating from it will land him on millionaire’s row.

We know within five minutes how the film will turn out, that it will be almost too late before Calvin discovers what a treasure the shop is and how worthy is the profession he now despises, but that nonetheless he will arrive at the moment of acceptance and rejuvenation—but this doesn’t really matter, because his journey to that end is so deliriously funny, and, for people of faith viewing it, filled with so many moments of grace.

The story takes place within the span of one long working day, during which we meet a shop full of delightful characters. Perhaps foremost among them is Eddie, played by Cedric the Entertainer. Cutting hair under both shop’s previous owners, he now rests on his laurels, still coming in and donning his barber’s smock to dispense his madcap advice and observations. Sort of an elder statesman with a loose wire upstairs, he makes such politically incorrect statements, at least for African Americans, that Rodney King, with his prior record of run-ins with the law, got what he observed, and that O.J. was undoubtedly guilty of murder. His put downs of Rosa Parks and Martin Luther King, Jr., might provoke a riot if made by a white man. And yet, it is Eddie whose words about the nature of the Barbershop as being the one place where everyone can come and share their outrageous opinions and still be accepted that helps open Calvin’s blind eyes to the value of what he is about to throw away.

Terri Jones, played by the one-named Eve, is the only female barber in the shop, so she apparently has adopted a very aggressive personality in order to hold her own in the very masculine environment. Currently she is trying to find out the culprit drinking her apple juice stored in the shop’s refrigerator, and also is deciding whether to continue her relationship with her worthless boyfriend. Her secret admirer is the soft-spoken Nigerian immigrant barber Dinka (Leonard Earl Howze), a gentle giant who goes out of his way to help her in any way he can.

Jimmy (Sean Patrick Thomas) is a college student made overly confident and arrogant by his newly acquired knowledge, which he loves to display. He has a running feud with the shop’s only white barber Isaac Rosenburg, (Troy Garity) who has grown up in the ghetto and imbibed its culture so thoroughly that he is more “black” than Jimmy. Because his skin is white, no one wants him to cut their hair, so his chief goal is to lure a customer into his chair. Who this turns out to be is a delicious irony, and a wonderful moment of grace. Ricky Nash (Michael Ealy), a two-time convicted felon, is the newly hired barber, given a chance by Calvin to make it good. However, when an ATM machine is hijacked from the convenience store across the street, the police come directly to Ricky because his borrowed van was used by the thieves

Calvin gives in to temptation when Lester the Loan Shark (Keith David) waves twenty thousand dollars in his face. This will be enough to finance his recording console and thus allow him to escape from what he regards as a nothing career. He is a bit dismayed when Lester lets slip that he does not intend to keep the spirit of his verbal agreement to keep the shop as a barbershop. It will be the front for a strip club, named The Barber Shop.” Lester will not take back the money that Calvin just accepted. As the day passes, and Calvin witnesses all the conversation and many warm scenes in the shop, he repents of his decision and goes to Lester’s office. The Loan Shark demands that if he is to call off the deal, Calvin will have to double the amount of money he pays back. Calvin, once as blind as the person in John Newton’s hymn, now sees the barbershop through Eddie’s eyes, a warm, welcoming place where, in the words of Proverbs, both the “quiet words of the wise” and “the shouting of a ruler among fools” can be expressed. Now he cannot bear to give it up.

In the meantime, as a running gag throughout the film, we follow the antics of two hapless thieves who stole the ATM machine. JD (Anthony Anderson) and Billy (Lahmard Tate), neither of them being very bright, make attempt after attempt to break into the machine. They are forced to haul the unwieldy affair from place to place, including a motel, while the police are on the look-out for it. There’s a hilarious moment when they are on the street and the cover slips off as a police car pulls up. JD feigns having trouble getting his money out, as a line, including one of the cops, forms impatiently behind him. How their caper, which impacts barber Ricky, as it was his van which they had borrowed for their heist, converges with and helps solve Calvin’s dilemma adds up to an hour and forty minutes of one of the most satisfying films to be seen during this early fall season.  Director Tim Story, writers Mark Brown, Don D. Scott and Marshall Todd, and a great ensemble cast have given us a real visual parable.

This film, with a set of discussion questions, was published in the October 2002 issue of Visual Parables. For the availability  of that issue contact the editor.

It takes a lot for Calvin, who wants to move out of the ghetto, to realize the worth of the barbershop left to him by his father.
Editor Rating ★★★★★5 out of 5