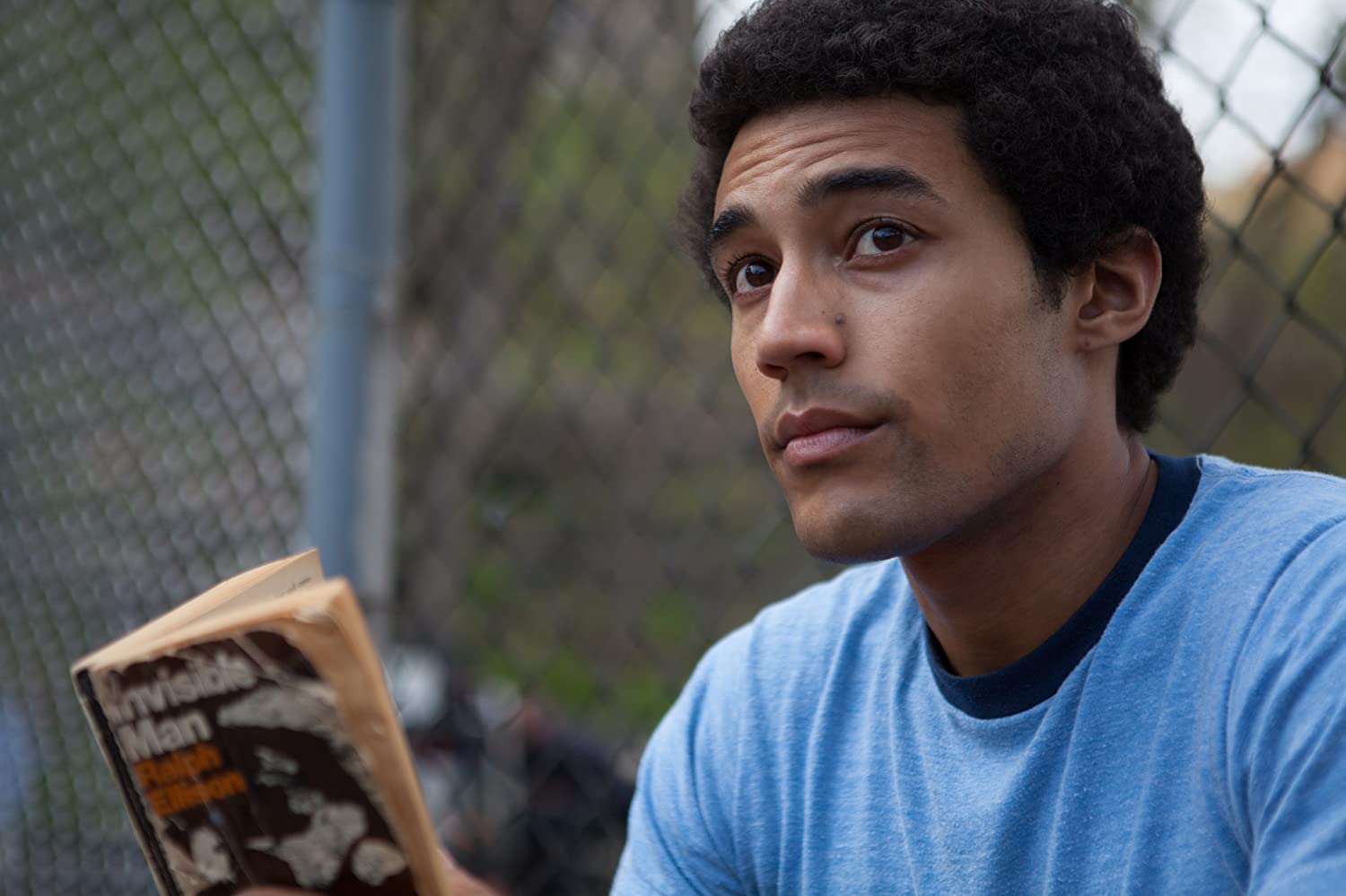 My son, eat honey, for it is good,
and the drippings of the honeycomb are sweet to your taste.
Know that wisdom is such to your soul;
if you find it, there will be a future,
and your hope will not be cut off.

Director Vikram Gandhi’s wonderful film, paired with the 2016 film Southside With You, would make a great double feature. This Netflix film focuses upon Barack Obama’s (Devon Terrell) life as a student of political science at Columbia University in 1981 New York City, a time when the city and its subways looked scruffy due to graffiti and litter. Barry, the name he went by then, is trying to figure out who he is and where he belongs. This, of course, is everyone’s struggle at that age, but being of mixed race with a father in Africa whom he has met but once, his is a far more complicated struggle than most young men face. Even were it not about the future President of the United States, this well acted film would be an interesting study of a youth coming to grips with his place in the world as a result of his mixed race, unsettled upbringing in several different nations, and an absent father.

Barry is a 20-year-old  junior transferring from a California college to Columbia University. Arriving in NYC’s Morningside Heights at night, he cannot get into the apartment he will share with his roommate, Will (Ellar Coltrane). He walks around the campus but is soon stopped by a white cop who asks for his ID. Barry is as well groomed as any of the other (white) students out and about, but the cop will not accept his story of having just arrived. He orders him to leave, which Barry does. This will not be the last time a white cop unjustly stops him.

The feeling of not belonging that this incident engenders will linger for Barry. In one of his classes where Barry speaks up, a white classmate accusingly asks him why blacks always must bring up slavery when they are talking about social issues. On the street where he rooms a local black street person resents what he perceives as a better off black encroaching on his territory. Only the intervention of another local black man, whom Barry has passed his test by giving him a cigarette and a light earlier, prevents a violent confrontation. Barry hangs out a lot with another friend, also regarded as an outsider, the Pakistani Saleem (Avid Nash). The latter seems to have little ambition, spending his time enjoying drugs and sex.

Barry meets in one of his classes, and at a party connects, with a bright white student, Charlotte (Anya Taylor-Joy). He does not care for the wild frat-type drinking and dancing at the party, so they leave, beginning their love affair. Charlotte, feeling more at home in Harlem than Barry, buys him a copy of a James Baldwin paperback. They become close but he resists meeting her parents during the Thanksgiving holiday. When they finally do get together at a restaurant, he puts on a front, telling them his father is an important governmental figure in Kenya. The Connecticut-based parents are open and accepting of him, but he still feels uncomfortable in their presence.  And he always is aware that people stare at Charlotte and himself because he is black—on the street it is often whites and at the Harlem restaurant Charlotte introduces him to, it is the blacks who look disapprovingly.

His black friend whom he met at a pick-up basketball game, PJ (Jason Mitchell), gives him the name “Invisible” because when alone Barry is reading Ralph Ellison’s novel Invisible Man. PJ introduces Barry to the black side of life Barry had never experienced, the huge Grants Public Housing Project. Later, Barry learns that PJ is more than the ghetto dweller he seems to be, that he is working on a PhD. Barry is ill at ease at a party PJ takes him to in the projects, and when he talks with an attractive woman, he is brutally beaten out in the hallway by her angry father.  He buys from a friendly street book seller W.E.B. DuBois’s classic The Souls of Black Folk in order to understand better the mind set of American blacks, who are almost as strange to him as whites.

Barry’s mother , Ann Dunham (Ashley Judd), has been living in Indonesia but visits him. He is able to share with her his feeling, in one scene saying:

Barry: You know, every time I open my mouth in class, it’s like… I’m supposed to speak on behalf of all Black people. Meanwhile, I, uh… I quit going to Black Student Union meetings because I didn’t feel like I belong there either.

Ann Dunham: The world is a big place, honey. You’ll find your way.

Obviously enjoying her company, they visit an art house movie theater together where they watch a 1959 French film popular with intellectuals, Black Orpheus. We do not see much of Ann, just enough to wish that she could have lived to see her son in the White House. She would have been in her mid-sixties. What a wonderful media character she would have been, as colorful perhaps as the delightful Lillian Carter was a few decades earlier!

Barry seems haunted by the Kenyan father who abandoned him. Beginning with his transcontinental flight at the beginning of the film, several times he starts to write the man he has not seen in a decade, but does not get very far. By the time he does finish the letter, he receives a telephone call from a Kenyan relative that his father has died. This is a heavy blow, but Barry says nothing about it when he accompanies Charlotte to the wedding of a family member. Best thing about the occasion is that the parents are friends of the famous activist  couple James and Grace Boggs. He was African American and she Chinese American, both of them authors deeply involved in the labor and civil right movements, and so the introduction was a propitious occasion. His conversation with them at their table includes the following:

Barry: My mom’s from Kansas, and my dad’s from Kenya. I’ve only met him once though. I grew up in Jakarta and Honolulu, and spent a little time in California, then well, I ended up here.

James Boggs: You know what that makes you young brother?

James Boggs: It makes you American. And you don’t ever have to choose.

James Boggs: You take the baton from the ones who’ve come before you, and you carry it as far as you can. And then you hand it off

Scriptwriter Adam Mansbach includes many of the incidents described in Obama’s memoir Dreams From My Father, as well as other sources. The well-played role of Charlotte by Anya Taylor-Joy adds sparkle, with Charlotte said to be a composite of the three white girlfriends Barry had while at Columbia. Of course, actor Devon Terrell is crucial to the film’s success, no doubt his own mixed-race background (father African American and mother Anglo-Indian) an important factor in moving into the future President’s mindset. His dedication to the role included his learning to use his left hand, including on the basketball court.  The only shortcoming is in the script itself which gives little hint of his great interest in political that he picked up in California. In fact, the film’s Obama declares he is not interested in such, whereupon Charlotte reprimands him for this. I’ve read somewhere that at Occidental College he was active in the boycott of South Africa, but this is never mentioned in the film. Also, it would have been good if more classroom scenes could have been included in order to bring out Barry’s brilliance as a student.

Despite the above qualms, I found the film totally engrossing and believe most readers will too. Although Barry’s father might not have left such a legacy as seen in the Proverb’s quote, it is undeniable that young Barack Obama did indeed gain from his struggle wisdom—and above all hope.

Barry, Barack Obama's nickname while he studied at Columbia U. in the early 80s, is the story of his struggle with his racial identity & the absence of his father.
Editor Rating ★★★★★4.5 out of 5
More Details