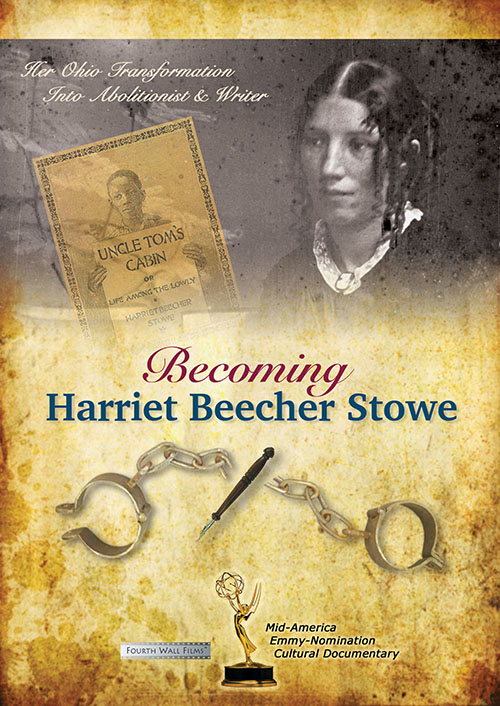 Speak out; judge righteously;
defend the rights of the poor and needy. 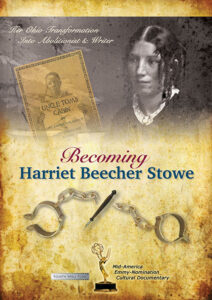 This is a welcome documentary on a woman who prior to the Civil War might be called the most famous female in America—Southerners would change that to “infamous.” Created by the same filmmakers who gave us Sons and Daughters of Thunder, Kelly and Tammy Rundle, it expands upon their feature film, which dealt mainly with the Beecher family’s years at Cincinnati’s Lane Theological Seminary between 1832 and 1850.

Born in Litchfield, Conn., in 1811, Harriett was one of 13 children sired by her father , Lyman Beecher (1775-1863) who was the most famous Congregational-Presbyterian clergyman of the pre-Civil War period. Her mother died when she was 5, and her father remarried. The family moved to Cincinnati in 1832 when he was invited to be the president and theology professor at the new Lane Seminary. The Rundles’ feature film does well in depicting the famous antislavery debates conducted by the students there, but leaves out the many other activities Harriett was involved in at the time. Much of these activities are covered in their documentary–her joining a literary society; her writing of articles; a visit to Kentucky where she witnessed the horrors of slavery first-hand; friendship with famous Underground Railroad conductor and Presbyterian minister John Rankin (we see his famous home/slave sanctuary perched high on a hill above the Ohio River in Ripley Ohio); Harriett’s friendship with Elizabeth, wife of Lane Prof. Calvin Stowe and the former’s sad death from cholera in 1834; her subsequent romance with Calvin and their marriage in 1836, and then their participation in the Underground Railroad; and her giving birth to six children. Cholera would again invade her life when one of her sons died from it, along with almost 3000 others in the area. The film points out that this loss of a child sensitized the future author to the daily losses that Black mothers endured when a child was torn from them and sold at an auction.

Cincinnati was home to many proslaverys, so she was disturbed by their 1836 riot in which many African American buildings were burned and several Blacks were killed. Then, after almost 20 years in the river city, the Stowes moved to Main where Calvin joined the faculty of his alma mater, Bowdoin College, in Brunswick. Harriett was pregnant with her seventh child. It is a wonder that she could find the time to continue with her writing, but she was disciplined enough to carve out some writing time amidst all of her domestic duties.

She was so upset by the 1850 Fugitive Slave Act that increased the penalties for those charged with aiding a runaway slave that she determined to make the largely disinterested public feel its horrors. Harriet’ Uncle Tom’s Cabin first appeared in 41 weekly installments in the abolitionist newspaper The National Era between June 5, 1851 and April 1, 1852, and later as a book, which soon sold 300,000 copies, and eventually translated into 75 languages. She based its hero Uncle Tom on a real person whom she had met. Southerners hated it, accusing her of falsifying the facts, so she wrote another book, A Key to Uncle Tom’s Cabin, in which she cited specific cases upon which her book was based. In the North the majority of the apathetic public was won over to the side of abolition, adding to the conflict with the South.

The documentary features writers, historians and storytellers — including  Christine Anderson, an Associate Professor at Xavier University and  Joan Hedrick, Pulitzer Prize-winning author of “Harriet Beecher Stowe: A Life. The latter states, “The Cincinnati years, I think, profoundly affected her. Her early marriage, her early motherhood – I think it was hard for her to leave that sacred ground. When she moved there, she was a New Englander, but when she went back East 18 years later, she was an American.”

The Director of Cincinnati’s Harriett Beecher Stowe House, whom I recently interviewed, Christina Hartlieb, was at the Cincinnati debut of the Runkle’s Sons and Daughters of Thunder to which this documentary is a companion. Among her many comments about Harriett, I found this especially interesting, “She was the social media of her time, the ability to change public opinion.” Pointing out how the novel fell from favor in the 20th century, people turning “Uncle Tom” into a pejorative, she reminds us that in the novel Uncle Tom is a far more heroic figure than is recognized. To Hartlieb Uncle Tom is “a Christ-like martyr figure” who sacrifices himself. “He lets himself be sold, purposely does not run away, so his wife and children don’t get sold.”

Along with the interviews of numerous academic Stowe experts the documentary includes clips from Sons and Daughters of Thunder and archival photographs and publications of the day, thus making every single minute of this 30-minute documentary informative and thrilling. I appreciated the moments given to Stowe’s friend Presbyterian minister John Rankin, one of Ohio’s most prominent Abolitionists and conductors of the Underground Railroad, having preached in his church at Ripley and visited his home at the top of the hill overlooking the Ohio River.

This fast-paced documentary belongs in the library of every social justice advocate, its relatively short length making it easy to incorporate in a class or group program. It is available on DVD at this website. The same filmmakers’ feature film Sons and Daughters of Thunder is available at Fourth Wall Films.

There is a good article on the filmmakers and their work at New Harriet Beecher Stowe Documentary From Quad-Cities Filmmakers to Screen on Feb. 18 | Quad Cities > QuadCities.com

Harriett Beecher Stowe's life is well covered, from birth to the formative years in Cincinnati, through the writing of Uncle Tom's Cabin, & its impact on the nation.
Editor Rating ★★★★★5 out of 5