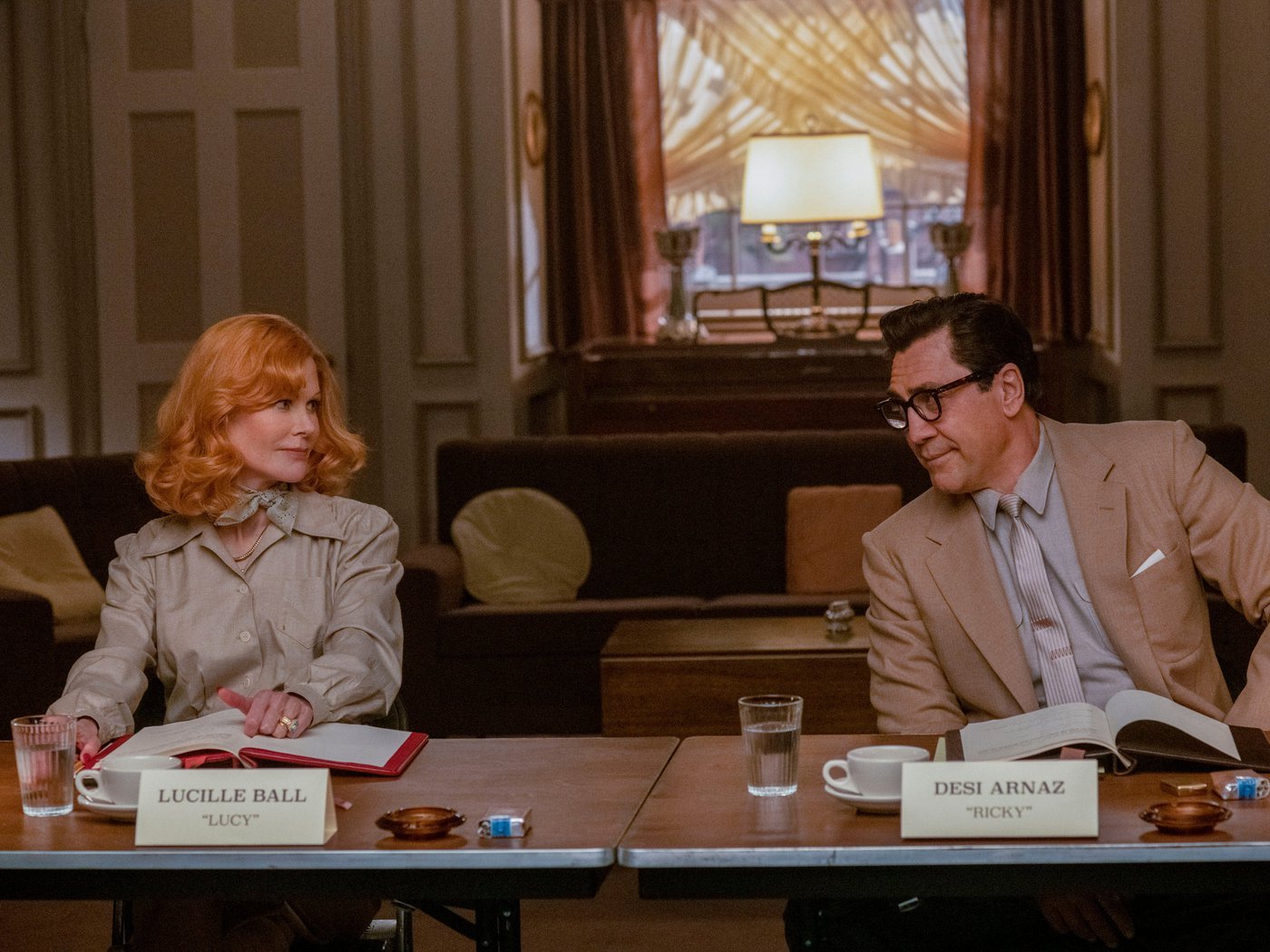 Writer-director Aaron Sorkin’s film  is a fascinating take on perhaps the most crucial week in the history of the “I Love Lucy Show” during its second season. Lucille Ball (Nicole Kidman) and husband Desi Arnaz (Javier Bardem) were the most famous show business pair in the country in 1952, their show drawing at times up to 60 million viewers a week! (Watching their antics was a must for my family and myself.).) But, according to Sorkin’s script, the two faced three crises that week, any one of which could have sunk the show and thus ruined their careers. Actually, the three crises unfolded during different years, so Sorkin has brought them together into one week for dramatic effect. We must remember this is a movie, and not a biography.

First, there was Lucy’s pregnancy. Big, BIG problem during the sex-denying Fifties. The CBS executives did not like Lucy and Desi’s idea of working the pregnancy into the scripts. Heck, they wouldn’t even allow the word “pregnant” to be used on the air, and the TV couple were made to sleep in twin beds. (A double mattress might lead the audience into thinking they engaged in (gasp)—well, it’s just too terrible to express!) In reality the baby in question was actually Lucy’s second child, Desi Arnaz, Jr., and he was born in January 1953, whereas the events of the film take place in September 1952.

The second crisis arose when famed gossip columnist Walter Winchell announced that Lucy was a Communist Party member. For the first few days of the week the press is silent on the story, but then late in the week one tabloid blurts it out on its front page, the top headline being, appropriately, in red. Lucy explains that the grandfather who raised her when her mother died had been a Eugene Debs supporter and then a Communist and, at his request, in 1936 she joined the Party to please him. She had never attended a meeting or taken part in its activities. Furthermore, she explains, “In those days, [registering as a communist] was not a big, terrible thing to do. It was almost as terrible to be a Republican in those days.” The film does not mention that Lucille Ball was grilled by the House Un-American Activities Committee twice–in 1952 and in 1953–and was exonerated. Although her testimony was supposedly sealed, Winchell found out and dropped his bombshell, not deigning to mention she had been cleared. How this is depicted in the film is a thrilling, thoroughly satisfying way with Desi showing his loyalty to his wife.*

Unfortunately, there is that third crisis. This is the one that will most impact her personal life. The newspapers carry stories about Desi’s affairs with various women (the tabloids broke this story in 1955). His disloyalty strikes at Lucy’s core desire of having a home, which to her was far more than a fancy house (she owned three of those). Several times she expresses her longing for a home, which to her meant a family with children. Thus, she comes up directly against Desi’s Cuban cultural image of the macho male.

The film is divided into the days of a week, beginning with Monday and progressing through Friday. On “Monday: The Table” the cast, writers and producers gather around tables in a U-shaped formation to read through and adjust the script for the next show, entitled “Fred and Ethel Fight.” In the sitcom Vivian Vance (Nina Arianda) and William Frawley (J.K. Simmons) play the Ricardos’ landlords and friends Ethel and Fred Mertz. Lucy is setting up their table for dinner, having invited the two who are not talking to each other over for dinner

that night. Through the week of rehearsals and revisions Lucy’s astute understanding of comedy will lead to clashes with the staff over changes she believes are necessary. Most women, especially in the male-dominated Fifties, would have quietly given in when the men over-ruled her, but we see that Lucille Ball definitely was not “most women.” In another context—with network suits (all male, of course)—when she is denied her request, she says:

I am the biggest asset in the portfolio of the Columbia Broadcasting System. The biggest asset in the portfolio of Philip Morris Tobacco, Westinghouse. I get paid a fortune to do exactly what I love doing. I work side by side with my husband, who’s genuinely impressed by me. And all I have to do to keep it is kill every week for thirty-six weeks in a row. And then do it again the next year.

Lucille Ball is not only supremely competent on camera and in her business, but supremely confident.

As the week progresses flashbacks are injected, revealing key moments in their relationship, such as their first sight of each other on the 1940 musical Too Many Girls. Lucy was a contract player at RKO appearing in small or supporting roles. Desi was a dynamic leader of a band—the scene of him playing the bongos, backed by his orchestra, is exciting, convincing us that it really does not matter that Javier Bardem doesn’t look like the Cuban, he certainly embodies his spirit.

Another great scene is when CBS reps want Lucy to develop her successful radio program “My Favorite Husband” into a television series. Lucy insists that Desi replace the current actor playing her husband. The executives balk, replying, “We don’t think viewers will accept Desi, a Latin with a thick Cuban accent, as the husband of a typical, red-headed American girl like Lucille Ball.” We know who won that argument, setting a precedent that foreshadows the crossing of forbidden ethnic/racial lines that a few years later West Side Story would cross. This is one of numerous scenes in which Lucille Ball’s steel resolve breaks through the gender mold society would squeeze her into. (This is a good time to mention that British Bible scholar J. B. Phillips translated Romans 12:2 as “Don’t let the world around you around you squeeze you into its own mould (sic).”)

A subplot that is not developed very much is Vivian Vance, who plays Ethel Mertz, resenting her character as being frumpy in comparison to the svelte Lucy Ricardo. She chafes at being the butt of many of the jokes and is incensed that when she goes on a diet that includes skipping breakfast, Ball sends an aide to her with a full breakfast tray. Who would have guessed that Lucille Ball harbored such desire to be the only glamorous star of the set?

Writer Sorkin presents his story in a semi-documentary way by having the most important members of the I Love Lucy creative team make comments at various points, supposedly years later. This can be confusing at times but does add a note of authenticity to the proceedings, as do the many black and white scenes depicting some of the show’s zaniest moments. Of course, the grape-stomping sequence in Italy is included. During the rehearsal Lucille comes up with the idea of losing one of her precious earrings so that she wallows amidst the grapes while searching for it. The large studio audience roars at this.

Contrary to what some critics who have dissed the film claim, there are many funny moments in the film, but there can be no doubt that Sorkin has emphasized the drama in the couple’s life. There is much seriousness behind the banter and Lucy’s rubbery facial expressions. Both Lucille Ball and Desi Arnaz were astute at business, the couple founding their own studio, DesiLu Productions and retaining the rights to the filmed reruns. At a time when men dominated virtually every workplace Lucille Ball fought for her autonomy, which ultimately would collide with Desi’s Latin macho background as her fame rose to overshadow his. I came away from the film feeling there is a note of tragedy in it. Lucille Ball and Desi Arnaz were deeply in love, and their romance broke Hollywood and the larger society’s tabus, but their natures—she longing for domestic bliss and his nature shaped by a macho patriarchal culture—ran counter to each other, destroying her dream of a happy home. Reportedly they would remain friends but could not live together.

I will treasure the film not only as a portrait of a woman triumphing against the misogyny of the times, but also as one who survived the infamous Red Scare fanned by the hateful Senator Joseph McCarthy and the House Un-American Activities Committee. Sorkin fudges a bit in that scene in which in front of the studio audience Desi makes the phone call to America’s “authority” on who is and is not a Communist, and the latter gives Lucy the thumbs up, but it certainly adds to the enjoyment of the moment. (This is a partial truth.) This film makes a good addition to my three favorite films dealing with the Red Scare and Black List, Guilty by Suspicion, Good Night & Good Luck, and Trumbo. Lucille Ball’s two children Lucie and Desi Jr. gave Sorkin their cooperation and after the film was finished, Lucie gave her endorsement.

*For more on Lucille Ball and the Communist charge see “I Love Lucy: The Redhead and the Blacklist” in the book Cold War, Cool Medium: Television, McCarthyism, and American Culture by Thomas Doherty.

In one week in 1952 Lucy & Desi Arnaz must finish a program while coping with pregnancy, a charge Lucy is a Red & Desi's infidelity.
Editor Rating ★★★★★5 out of 5
More Details