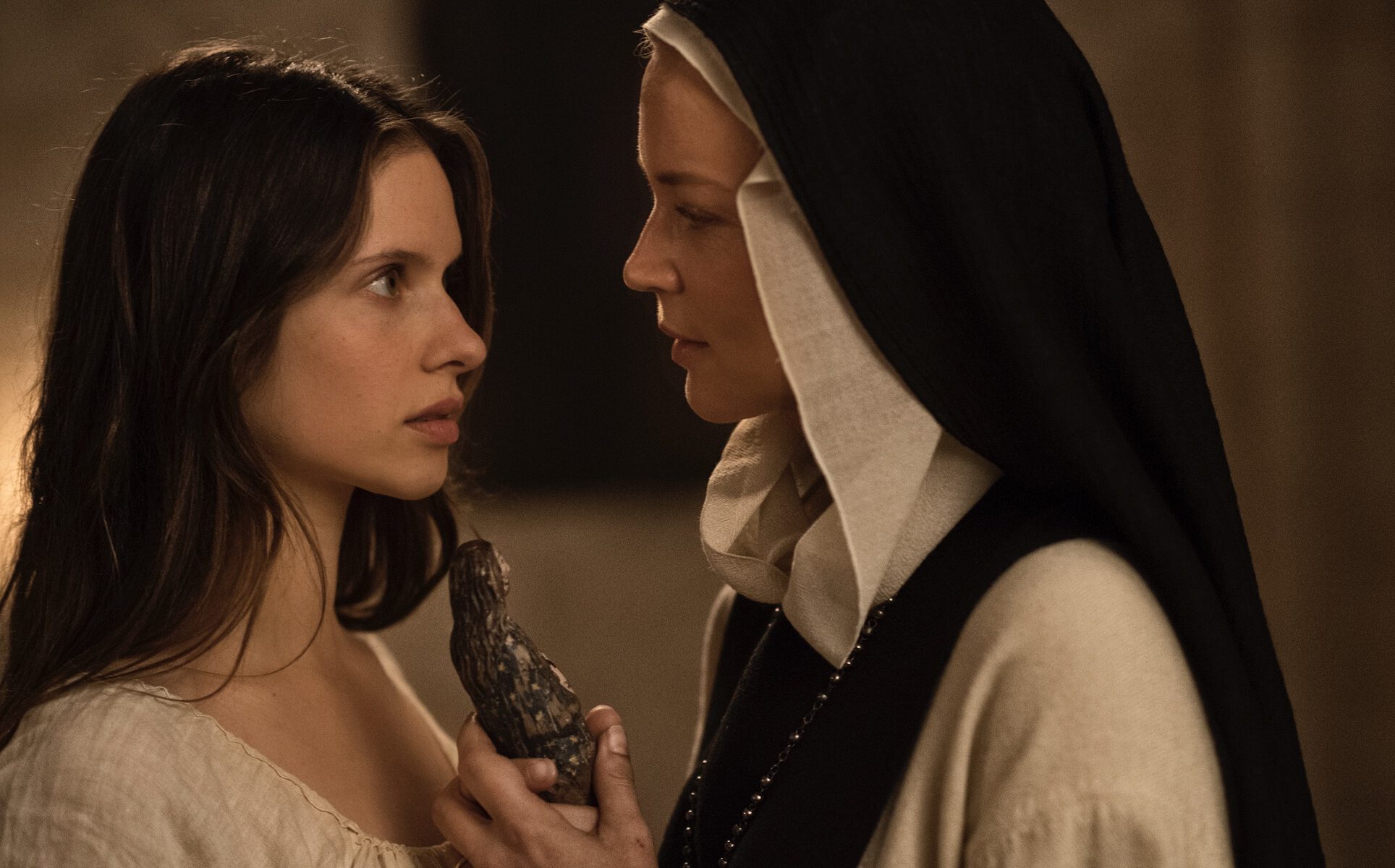 “Beware of false prophets, who come to you in sheep’s clothing but inwardly are ravenous wolves.  You will know them by their fruits. Are grapes gathered from thorns, or figs from thistles?  In the same way, every good tree bears good fruit, but the bad tree bears bad fruit. A good tree cannot bear bad fruit, nor can a bad tree bear good fruit.  Every tree that does not bear good fruit is cut down and thrown into the fire.

Director and co-writer Paul Verhoeven’s film about a 17th century nun is so sexually graphic that many church folk will consider it pornographic. However, based on Judith C. Brown’s book Immodest Acts: The Life of a Lesbian Nun in Renaissance Italy, it is a serious film exploring sexuality and faith and the church’s cruel deviation from the teaching of its Founder. And I must say, that though it is the Roman Catholic Church under fire here, the Protestants, with the notable exception of the Anabaptists and the Quakers, were not any better in following the teachings of Christ.

Benedetta Carlini (Elena Plonka at 8-years and Virginie Efira as an adult) was a 17th century Italian nun who claimed she had visions of Mary and Jesus speaking personally to her. She was the daughter of a wealthy man who had to negotiate with the canny Abbess Sister Felicita (Charlotte Rampling) for his eight-year-old daughter to be accepted in their abbey in the town of Pescia in Tuscany. Sister Felicita obviously is shrewd in business matters, demanding that would-be members bring with them a pricey dowry. As she says when the father at first balks at paying more than he had first offered, her nunnery “is not a charity.”

Once accepted as a novice, Benedetta is told by one of the nuns preparing her, “Your worst enemy is your body.” We see that long before prudish Victorianism, the Church had become suffused by the Neo-Platonism that cast aside the Hebrew unitary view of humans for a dualism that split body and soul. Thus, sex was bad (or a necessary evil) and celibacy was good. Later we will see people lashing their bodies as they seek forgiveness for their sins and deliverance from a plague.

While praying before a statue of the Virgin Mary (with one nurturing breast exposed), it falls upon her as if it were mounting her. The girl excitedly puts her mouth around the exposed nipple. The nuns are astonished at what they regard a miracle because the girl is not injured. (This is not the first alleged miracle, as on the way to the convent her father’s party is waylaid by robbers, and the little girl boldly orders them to give back the pendant just taken from her or they will suffer divine punishment. “The Virgin does all I ask of her,” she tells them. One of them is mocking her, when suddenly he is bombed by a bird flying overhead. Amidst awe and laughter, the pendant is promptly returned to her, and the bandits ride off.)

Eighteen years later Benedetta is a full member of the convent. One day a peasant girl is seeking refuge from her abusive father while Benedetta’s father is visiting. Sister Felicita, as expected, declines, a purse having long since replaced her heart. At Benedetta’s bidding her father agrees to pay the Abbess for the girl’s dowry, and she is admitted. She is Bartolomea (Daphné Patakia), and Benedetta is made her supervisor. And yet it is the newcomer who introduces her mentor to sex, once their mutual attraction surfaces, the peasant girl having been raped not only by her father but other members of her family as well. How Benedetta, through her intelligence and conniving, rises in power, despite rumors of her lesbianism and the belief of some of her fellow nuns that her visions are fake, makes for fascinating viewing.

Although Verhoeven focuses more on the sex, his film also picks up on the book’s concern for the place of women in a patriarchal world that stacked the deck against them. We are led to believe that Benedetta is not content to sit back and take what comes her way but may well have used the faith of gullible people for her own advancement.

Although much more carnal, Verhoeven’s film might remind one of the 2010 film Vision: From the Life of Hildegard of Bingen. The two are somewhat similar in that they both were mystics and they faced male opposition because of them, but Benedetta’s indulgence in lesbian sex really sets her apart, as well as the stigmata that appear on her body—sent by Heaven or self-inflicted? Sister Christina (Louise Chevillotte) is sure it is the latter and eventually will testify that she saw Benedetta faking it.

There is a trial which will derail Benedetta’s plans, and also in which we see the cruelty of the so-called servants of Christ. The trial is presided over by the Papal Nuncio from Florence (Lambert Wilson), as odious a “false prophet” as one can find. To get to the truth he shows one witness about to be interrogated “the pear,” a prickly that will painfully scar her vagina. As quickly as Benedetta rises to power, she will fall. It is after all, a man’s world, and uppity women will pay a high price for not staying in their place.

It is obvious that the director sides with Sister Christina in doubting the validity of Benedetta’s visions and miracles, although the film ultimately is ambiguous about this. Some, such as the Catholic group The American Society for the Defense of Tradition, Family and Property have denounced the work as “an anti-Catholic and blasphemous film.” I can understand this because in the film Sister Bartolomea discovers in a trunk a small wooden statue treasured by Benedetta as a girl when she entered the convent. She carves the base of it into the shape of a penis, and after Benedetta smooths out the carving, the lovers use it as a sex toy. I suspect this is a fabrication made up by the director/writer to sensationalize the film because in my research I could find no mention of this—and the charge Benedetta was convicted on was a “non-penetration.” No wonder conservative Catholics are upset by the film!

I cannot recommend this for group use—the above-mentioned Vision is a far more suitable film—but those interested in sexuality and Christianity and the struggle of women for autonony will find plenty to ponder and discuss in this provocative film.