14 years ago I wrote the following review for the magazine Christianity and the Arts, which alas is no longer published. Recently I have had two occasions to recall the review–first, the blog before this one when  I wrote about writer Fr. Andrew Greeley; and second, when I wrote the article “The Best Food Films” that will soon appear in ReadtheSpirit.com. 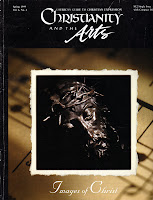 The narrative of Isak Dinesen’s short story “Babette’s Feast” is as spare as the four Gospels. And like them, it is a story full of grace. Babette Hersant’s story of suffering and service is so suffused with amazing grace and extravagant, sacrificial love that she can be regarded as a striking example of the image of Christ the Lover.

The story begins, almost forty ears before the feast of the title, with two women. Philippa and Martine are the daughters of their widowed father, known to us simply as Pastor. He is the founder of an ascetic sect of the Lutheran Church, as stark as the rugged, bleak coast of Jutland, where they reside. The pastor is so religious that he named his daughters after the Founder of Lutheranism and after Luther’s chief assistant Philip Melanchthon. 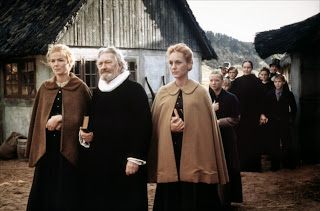 Philippa and Martine have become their father’s right hands, accompanying him on visits to parishioners, cooking for the sick and the poor, and leading the singing at the Sunday services. Each of them has a suitor; Martine is wooed by a young cavalry officer, exiled to his aunt’s home in order to mend his dissolute ways. Philippa has attracted the attention of a famous opera singer, who gives her voice lessons and who hopes to woo her away to Paris, where he promises to make her a great star. The sisters turn the suitors away, choosing to stay with their father and his ministry. 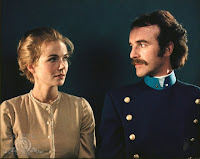 Twenty-six years pass. Pastor has died, and Philippa and Martine have become the spiritual center of the little sect. During a fierce storm, the now elderly sisters hear a knock on the door. It is Babette, half dead from exposure. She bears a letter from the opera singer introducing her as needing help. During a political uprising in Paris her husband and son have been killed, and she has fled for her life. She begs to be hired as a servant, and when the sisters reply that they have no money to pay her, Babette offers to work for room and board.

The sisters teach Babette how to make a gruel from fish, daily fare for them and the shut-ins they visit. The gruel is as appetizing as the word sounds, but it sustains life and is offered freely to those who have nothing. As well as cooking, Babette also takes over the marketing, freeing the sisters to spend more time with the parishioners. A strange phenomenon develops—the food begins to taste better to everyone, and the sisters note that there is money left over since Babette’s arrival. Here is an echo of the abundance from Christ’s feeding the five thousand, although there is no claim in this film to the miraculous. In two brief scenes with local merchants we see that Babette is a shrewd buyer. 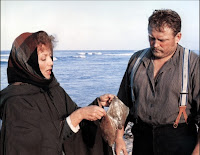 Fourteen years pass. The parishioners meet regularly for prayer and a meal at the sisters’ home. But their meals are as filled with grumbling and bickering as they are with prayers and hymns. They harbor resentments and grudges against each other for wrongs committed long ago. Interestingly, their bickering always stops when Babette enters the room to serve their simple meal. A disapproving glance or a clearing of her throat is enough to bring shame and silence. Her mere presence is a rebuke to unworthy words or thoughts.

One day a letter from France arrives for Babette, the first communication she has received since her arrival. She has won 10,000 francs in the French lottery. The sisters, at first delighted at Babette’s good fortune, grow sad thinking that she will now be leaving them. However, Babette surprises them when she offers to prepare a French meal for the sect in honor of Pastor’s one-hundredth birthday. The sisters, who usually serve only simple meals, reluctantly agree. Babette then asks to be allowed to go to France for a few days in order to buy the food. In her absence, the sisters resume the cooking. In a sly touch of humor the viewers is shown the dismay on the parishioners’ faces as they taste the unsavory results. They have grown accustomed to Babette’s delicious offerings.

When Babette returns, followed by a procession of crates of wine and champagne, vegetables and small quail, and even a large turtle, the sisters are aghast. Babette’s French meal has clearly gotten out of hand. The sisters confess their error to the parishioners, but their love for Babette requires that they go ahead with the dinner. They all agree that they will endure the meal, not enjoy it as they honor their founder.

The night of the feast arrives. The sisters remove their father’s portrait from the room to save him the disgrace. Babette is working hard in the kitchen. A kettle of turtle soup simmers on the fire; trays of baked good are in the oven; succulent fruit is on the platters. The table is set with a glittering array of crystal glasses and goblets, fine china, and gleaming silver. The cottage is transformed into a setting fit for a king. For the viewers, this is a visual feast. 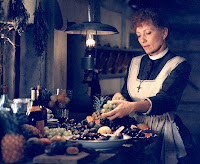 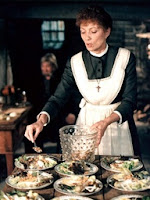 The guests arrive, reminding one another of their vow not to enjoy the food. Among them is General Lorenz Lowenhielm, Martine’s shy young suitor from long ago. He has risen in rank and prominence at the royal court. He intends to show Martine what she has missed. But nothing turns out as expected.

First, the general is amazed at the splendor of the table, far different from the frugal meals he remembers eating here. As the various wines, the soup, and succeeding courses are brought in by the boy serving as waiter, the general exclaims each time about the quality of the presentation. The other guests, whose limited, rigid lives have left them ignorant of culinary fare, ignore or misunderstand his comments. However, the exquisite beauty and taste of the food begin to work their magic on the diners. We see the softening of spirits, the reluctant then growing delight on their faces as the meal progresses. One by one, the parishioners who had held grudges against one another seek pardon or offer forgiveness.

When the main course arrives, a magnificent dish, the general can no longer contain himself. He exclaims that he knows only one person in the world who could have made this, a Parisian female chef over whom men fought duels, a chef so gifted that her meals were called: “a love affair of the romantic and noble category in which one could no longer distinguish between bodily and spiritual appetite.” He rises, clinks his spoon on his glass, and delivers an address on grace, the grace of God which transcends time and distance, and which “proclaims a general amnesty” to all. No longer is he a vain man parading his lofty position before Martine, the woman who had rejected him. 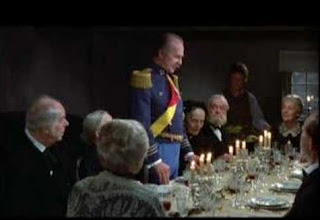 He concludes by quoting Pastor’s favorite Psalm (85:5-10): “Me3rcy and truth have met together. Righteousness and bliss have kissed one another.” (One of many ironies in the film). As the meal moves to a climax, the company adjourns to the parlor to sing a hymn and continue their words of reconciliation, all the result of the extravagant outpouring of Babette’s love (and skill).

The general leaves after assuring Martine that they have been together in God’s grace all along. The others, afraid to break the magic spell of grace, gather in a circle outside the house. There, under a brilliant canopy of stars, they hold hands to dance in a circle as they quietly sing.

The sisters go to congratulate and thank Babette in the kitchen, from which she has not ventured all evening. There she tells them that she has spent all her lottery winnings on the meal and will be staying on with them. When the sisters in astonishment lament Babette’s impoverishment, she replies, “An artist is never poor.”
Babette, as a culinary artist and as a Catholic (“papist” their father would have said), has intuitively seen the rigid ascetism with which the parishioners have imprisoned their spirits. In their denial of worldly things they have forgotten that God created and blessed the world. Each time the general expressed his pleasure with the food before him, he echoed God’s words of delight in the Genesis account of Creation: “God saw that it was good…And God saw that it was very good.” 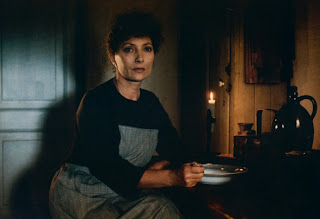 Christ affirmed the goodness of creation also when he used bread and wine to convey the deepest bond between himself and his followers. He often spoke of the kingdom as a great banquet. Babette’s life becomes an image of Christ as the banquet host.

There are other similarities. Both Jesus and Babette fled to foreign countries. Jesus often called himself a servant, taking that role when he washed the feet of his disciples. Babette worked for fourteen years as an unpaid servant. Like Christ in St. Paul’s letter to the Philippians (2:6-8) Babette “emptied” herself. She forsook her culinary authority and allowed herself to be taught how to make a simple gruel, which she transformed into a worthy meal. 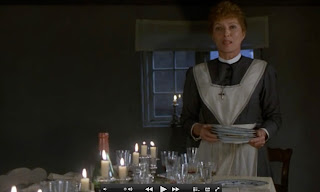 Most central to this film, however, is the theme of extravagant love and grace. Babette gives everything she has to deliver a group of people from their spare, colorless, and loveless, religion. She invites those who have chosen meagerness to a feast, to taste with joy the abundance of life. She transforms a little gathering of ascetics into an affair of beauty and splendor. As an image of Christ the Lover (and, we ought to add, Artist), she has wooed them out of the darkness and into the light of the Creator God’s presence.