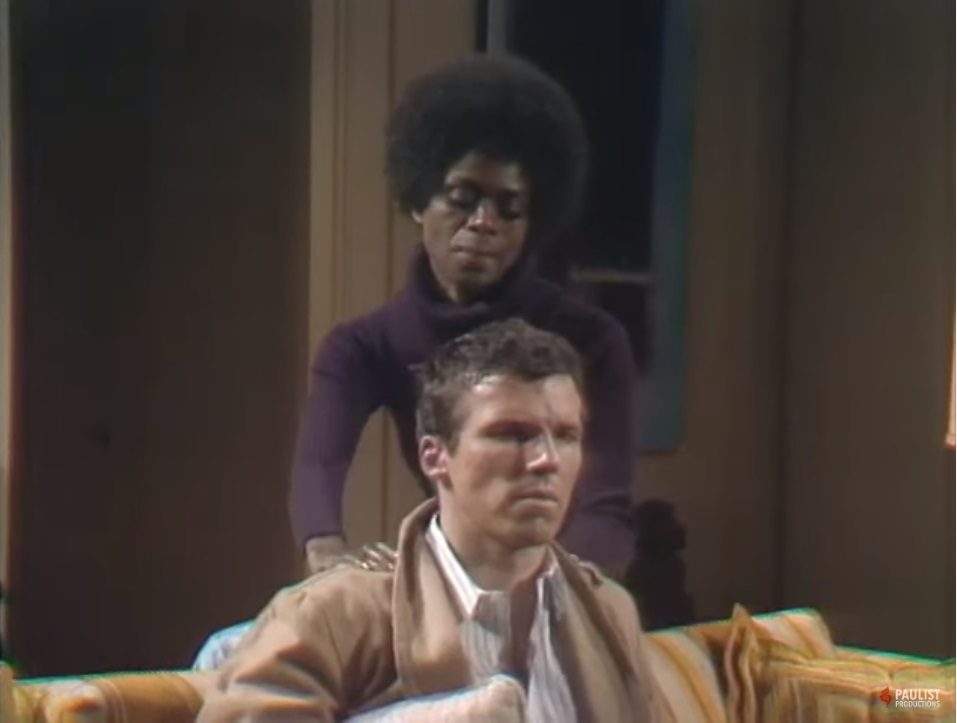 I want to honor Cicely Tyson upon her passing, but there are no reviews of any of her films in Visual Parables other than KING, and I have brought it up from the archives before (she plays Coretta Scott King). I did review the wonderful THE AUTOBIOGRAPHY OF MISS JANE PITTMAN when it came out in 1974, but that was in a Catholic journal that has been lost. So, upon discovering that she appeared in one episode of INSIGHT, the series which we have been promoting for the last several months as a great resource for those wanting short dramas for use in classes, I decided to watch and review it. This is an example of the 21  Insight reviews with questions that are available in back issues of VP.  So far, all of them had included now famous stars who were near the beginning of their careers and who believed in  producer Fr. Bud Kieser’s mission of providing short dramas each week promoting the gospel or its values.   Each month I keep adding at least 2 reviews. If I live long enough, I plan to review all 275 episodes, or at least those that are suitable.

Part cautionary tale about using drugs to get high on life, this episode suggests that simple meditation is key to the wholesome life. It is the only story in the Insight series in which Cicely Tyson has a role, that of Edna, a Christian who comes to the rescue of the suicidal Mark (Anthony Costello) after he has mixed up and ingested a chemical compound. The drama actually opens in a prison cell where Mark is talking with the despondent Sam (Glynn Turman), trying to get him to try meditation. Then, after some comments from host Fr. Kiesler, there are some flashbacks that show how Mark came to his present state of coping with hard times. At a party we see how he had been, like his friend Webb (Greg Mullavey) looking in the wrong place for highs and fulfillment, drugs. Later he becomes suicidal, and Edna finds him reeling in the hallway while she is visiting a friend. She takes him back inside his apartment, and there ensues several days during which she visits him and teaches him how to let go and go deep down inside himself. She was successful, for when the story shifts back to the jail cell Mark is trying to help a skeptical Sam. We do not know he had been sentenced, but he is about to be released, the guard bringing him his parole papers. Before leaving, Mark continues to try to help Sam. The latter resists, and then Mark does something that his cellmate does not expect.

You can watch this fre on YouTube by clicking this title Bird on the Mast.

A man seeking highs in drugs becomes suicidal and is helped to learn to meditate by a caring Christian, & he in turn reaches out to a cellmate when in prison.
More Details