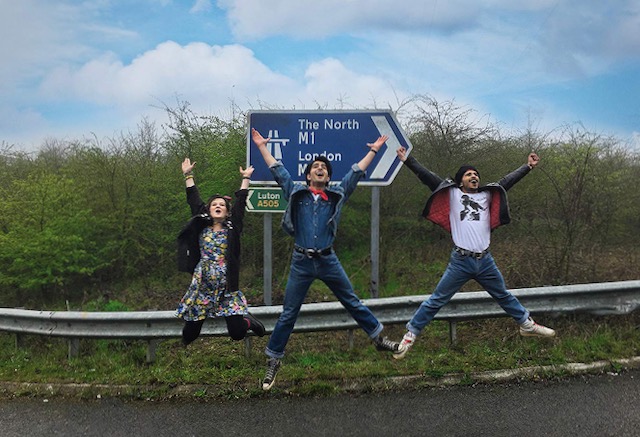 More in number than the hairs of my head
are those who hate me without cause;
many are those who would destroy me,
my enemies who accuse me falsely.


A glad heart makes a cheerful countenance, but by sorrow of heart the spirit is broken.

If you’re feeling the blues, I have just the right film for you—directed by Gurinder Chadha, and with co-writer Paul Mayeda Berges adapting journalist Sarfraz Manzoor’s memoir Greetings From Bury Park, this is the director’s best film since her Bend It Like Beckham. Her new film also deals with beleaguered Pakistani immigrants in Great Britain, but instead of soccer, music is the avenue for liberation of the spirit of its hero—in addition it faces the growing animosity of such anti-immigrant groups like The New Front. If your heart is not gladdened and your countenance cheerful by the end of this tuneful musical, you need to see a doctor.

Javed Kahn (Viveik Kalra) is a teenager feeling oppressed not only by the racist skinheads who threaten to beat him up on his way home from school, but also by his domineering father Malik (Kulvinder Ghir) who tries to rule him and his sisters Yasmeen (Tara Divina) and Shazia (Nikita Mehta)with the same iron-clad hand as in Pakistan. The family had immigrated to the drab factory town of Luton, a London suburb, and16 years earlier Malik had found drudgery work in a GM plant, making just enough to afford their apartment in a housing complex. The time is during the 1980s rule of Margaret Thatcher when the economy tanked, giving rise to anti-immigrant feelings among the white majority making up The National Front. Laid off because of the economic downturn, Malik becomes embittered, and thus even more determined to keep his son and daughter Pakistani, freed from Western decadence.

Javed is a sensitive boy who writes poetry and longs to become a writer, but his father, seeing no practical use for writing, wants his son to go into a profitable profession or trade. “Follow the Jews,” he tells his son. This lack of support fills the son with self-doubt so that he too, questions the value of his writing. He throws away a stack of his papers, but a whirlwind scatters him so that Mr. Evans (David Hayman, a neighbor finds the one written against the National Front, reads it at home, and later tells the lad, in the presence of the family, that he likes it. This makes no impression on Malik.

At school a fellow Pakistani immigrant student named Roops (Aaron Phagura) gives Javed audio cassettes of the music of Bruce Springsteen. Javed knows nothing about “The Boss,” and other teens write the rocker off as having nothing to say to them, compared to the currently popular Pet Shop Boys and Cutting Crew. However, when Javed pops the cassette into his Walkman and  “Dancing in the Dark” pours through his headphones, he feels he has found someone to whom he can relate. Bruce’s “Man, I ain’t getting nowhere/I’m just living in a dump like this/There’s something happening somewhere…” is as true for a lonely boy in Luton as in New Jersey. Ditto with “The Promised Land,” “Thunder Road” and “Born to Run.” Javed decorates his room with Springsteen posters and starts dressing like his hero.

The lad finds encouragement from the song lyrics to return to his own writing and the courage to show them to his English teacher Ms. Clay’s (Hayley Atwell). She becomes a major supporter, even asking a friend at the local newspaper to give Javed an internship. One song gives Javed the courage to approach Eliza (Nell Williams), the girl in the literature class who has caught his attention, and ask her for a date, even though his father has forbidden the practice.

Malik, of course, does not approve of the music. And even though he mistakes Bruce for a Jew because of his last name—the father has absorbed the prejudice about Jews making money, and therefore, as mentioned previously, he advises his son to be like a Jew by going into a high-paying profession.

Bruce Springsteen’s songs make the film soar, the filmmakers showing in numerous scenes the words curling beside, above, and below the teenage singers. The high school DJ refuses Javed and Roops’ request to air an all Springsteen program on the in-school network, so they sneak into the studio and, while the DJ is out, put on “Born in the USA.” The song blasts throughout the halls and class rooms, quickly energizing the students. Javed, Roops, and Eliza dance out into the city streets and into the fields, the movie taking on the air of La La Land or Singing in the Rain. As with any good musical, we are swept along so that we excuse this departure from reality, our spirits lifted by the exuberant songs.

The dancing ends abruptly, reality setting in when the three come upon the town’s mosque which has been desecrated by racists hanging a severed pig’s head from it. Later on there is a National Front march during which Malik is injured by an attack of Muslim haters. Javed is not present because he has secretly bought tickets to Bruce Springsteen’s nearby concert. There is a split between him and Eliza over this, and when the boy wins a writing contest that funds a trip to an international writing conference at Monmouth College (Ms. Clay points out that the songwriter’s hometown of Asbury Park is close by), the lad separates from his family as well because Malik forbids him to go. How all of them are reconciled will make you feel good about the world and the possibility of overcoming divisions.

Upon his return from America (the New Jersey segment is a delight!), Javed’s speech to his school about his trip and his music idol, one in which he uses Springsteen’s music and references his father’s disappointment that his dreams about life in Great Britain have not been fulfilled, is very moving—especially because Eliza has persuaded the Kahn family to come. The last scene in the film is a lovely act of grace in which father does something totally unexpected that cements their renewed bond. If you aren’t bawling, or at last teary eyed by  then, maybe you will be when you see the pictures of the man who is the basis for Javed, memoirist Sarfraz Manzoor, as well as the real Roops, on display during the end credits. We learn that the two high school friends have kept in touch and that Manzoor has attended over 150 Springsteen concerts.

With about a dozen and a half of the Boss’s songs, this film offers two pleasures—that of a musical joined with a quest for social justice and a fine father and son story.