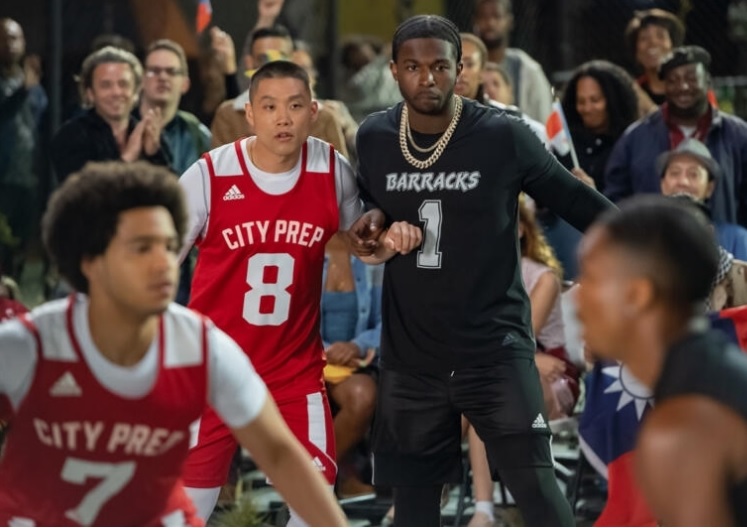 
Do not be conformed to this world...

Director/writer Eddie Huang comes up with a new twist for a basketball film—a Chinese/American player. Alfred “Boogie” Chin (Taylor Takahashi) is the player living in Queens, New York. He is so good at handling and shooting the ball that his combative parents have enrolled him in a posh preparatory school so as to better attract a scout for a college team that will offer him a scholarship. He is not interested in a college education but in using a college team as a steppingstone toward fulfilling his dream of playing for the NBA.

The film actually begins when his Mr. Chin (Perry Chee) and Mrs. Chin (Pamelyn Chee) visit a fortune teller  (Jessica Huang) to inquire about her pregnancy. Apparently more of a sage than a predictor, the woman says she cannot tell them about the baby or its sex, but she advises them that kindness is a must for their relationship. “Love will melt the sharpest sword,” an assurance that will be repeated years later when the son, nicknamed Boogie visits the same woman.

Running through this coming of age story is the classic novel Catcher in the Rye that their literature teacher struggles to teach his largely indifferent class. Boogie sees no relevance of the novel to his life. He is, however, interested in his attractive classmate Eleanor (Taylour Paige), although their initial interchanges are somewhat hostile. On the basketball court Boogie continually ignores the team-based plays of the coach. He trashes his teammates, demeaning their value. The team has been a consistent loser in its league, the school and coach welcoming Boogie’s transfer in the hope of improving the team’s performance. Boogie’s refusing to share the ball and insisting on scoring himself contributes to the team’s low morale.  Despite this, one of the players, Richie (Jorge Lendeborg Jr.), is a loyal friend, sitting with him in the back row of the literature class.

Boogie’s home life is filled with parental strife, each parent pushing Boogie in a different direction in regard to his future. Mr. Chin as an immigrant from Taiwan realistically understands that the Chinese were brought to the USA to be used but not accepted. He longs to return “home,” though when he mentions the word, Boogie replies that this is “home.” Boogie is caught between his father, whom he sees is irresponsible (he has been in trouble with the law), and his overly strict mother who is “responsible.” His father and his uncle want him to accept an offer to play with an Asian league that offers him a huge payment to sign, but this will ruin his chances of becoming an NBA player. A major factor is that his NBA dream rests upon his playing on a prestigious college’s team, and thus far the two offers proffered him do not include financial aid due to his ordinary grade average.

There is, of course, a Big Game, at which Boogie must prove his mettle. The rival team stars a super player named Monk (Bashar “Pop Smok” Jackson). When Boogie goes to observe him playing pick-up ball, Monk, noticing him, stares back at him hostilely. Off court they develop a deadly rivalry. During all this Boogie and Eleanor develop their mutual attraction until the bedroom scene that contributes to the film’s R rating. There is a role reversal in which it is the more experienced girl who leads the virginal boy through their encounter. This initiation into the mysteries of sex accompanies the boy’s growing emotional and intellectual maturity. Thanks to his coach and friend Richie, Boogie begins to appreciate the team and its success being paramount over that of an individual player, including himself. He realizes that he loves Eleanor and overcomes his reticence to tell her. And his visit to the fortune teller seems to help him in arriving at his own decision concerning his future—not just that of his sure-thing of playing for an Asian league vs. only the possibility of getting to the NBA, but also his relationship with his warring parents.

The sex scene (though no nudity) will make this a doubtful choice to watch and discuss with youth, but for young adults the film offers a great opportunity to explore a seldom shown side of the children of immigrants in America, as well as the place of Asians in sports. It is either the father or the son who remark that for most Americans the idea of “a Chinese basketball player is a joke.” Some of the scenes leading up to the Big Game are heartening as Boogie becomes more attuned to the team’s success than to his own. The game itself is exciting, and the aftermath, especially when Monk encounters his rival after the game. One might wish that Pop Smoke’s role had been expanded more to reveal his own hoop dreams as a ghetto youth, especially since the rapper was murdered early in 2020, thus cutting short his film career. Still, we see enough of him to discern that Monk is not a cardboard villain or menace.

A Chinese-American boy with NBA dreams has trouble finding a college that includes tuition included with offer of playing on team, as well as conflict with parents.
Editor Rating ★★★★★4 out of 5
More Details