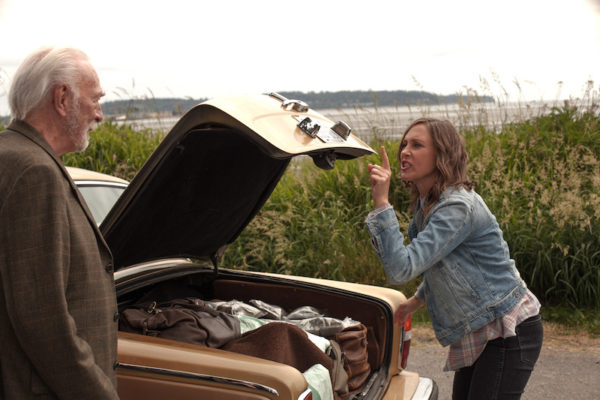 Laura is upset that her father has been selling his marijuana along the way. © Sony Pictures Classics

Even were she religious Laura (Vera Farmigia) would have difficulty with the Fifth Commandment.  “He has a condition,” she tells her therapist concerning her father. She has set a hard boundary between herself and her dad Jack (Christopher Plummer) by setting an alarm as her phone ringtone from him so that she will be aware it is he calling. Despite his many calls, she refuses to answer. She does not want to bring back “years of disappointment.”

The drug-dealing Jack is not Laura’s only problem. She is obsessed at rescuing stray pets, her small Seattle home filled with cats and dogs. In the first scene, on the way to the therapist, she picks up a little kitten, places it in her bag, and sneaks it into her session. Her teen son Henry (Lewis MacDougall), a talented drawer, is okay with the animals because they help drive away the men who spend a night sleeping with his mom. However, at school he is bullied, and his penchant for sketching nude versions of the adults he does not like gets him kicked out of school.

Of course, Laura and Jack are thrown together when he wears out his welcome at his retirement home due to his selling pot. Refusing to open her home to him, she agrees to transport him to her sister JoJo (Kristen Schaal) down in California, provided that he coughs up the money necessary to get Henry into the art school where he would thrive. And so, the film becomes one more road trip adventure. She brings along, as well as picking up others along the way, some of her needy animals, causing Jack to say to her, “You are like the Pied Piper of mange.”

Unknown to her Jack has sneaked a valuable stash of weed into the trunk, some of which he sells along the way. They stop at two of Jacks old friends and her shiftless former husband, as well as other places along the way. When she discovers the packets of weed and throws some into the roadway two cops approach, and we expect that the law will catch up to the old r rascal at last. Instead, the cops ignore the packets and arrest Laura because their check of her license plate turns up a raft of unpaid parking tickets. And so it goes.

Writer/director Shana Feste’s film is funny, with Plummer at his rascally, but charming best, but not especially insightful, ending probably in a less than realistic, but audience-pleasing, way. The octogenarian actor is the main reason for seeing this. If you want to see a truly moving father-daughter film, then Leave No Trace, beside which this film seems totally artificial, is the one to choose.

In this road trip movie a daughter constantly is going up against her wayward father who sells marijuana along the way.
Editor Rating ★★★★★3 out of 5
More Details