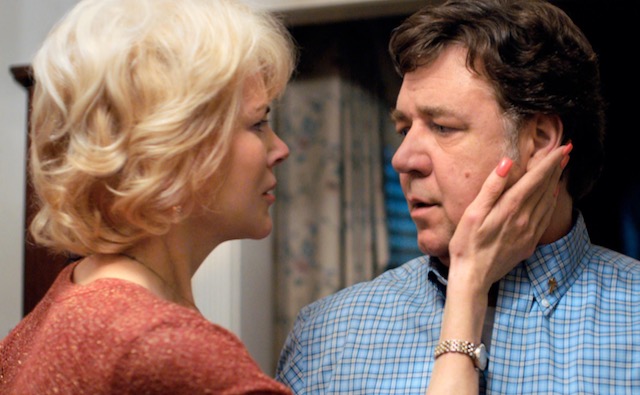 Beloved, let us love one another, because love is from God; everyone who loves is born of God and knows God. Whoever does not love does not know God, for God is love.

Veteran actor turned director Joel Edgerton in his latest film tackles the on-going problem of the attempts by Fundamentalist Christians to “cure” homosexual through conversion therapy. His is the second recent film to portray this—see The Miseducation of Cameron Post review in the October issue of VP. If the earlier film is directed mainly at youth, this one, based on the memoir of Garrard Conley, clearly aims for the minds and hearts of parents and other adults dealing with youth.

Marshall Eamons (Russell Crowe), a Ford dealer, who also pastors a Baptist church, is proud of his teenage son Jared (Lucas Hedges), he tells his congregation one Sunday morning. And then he learns that the boy has gay leanings. At college Jared had been raped by his roommate, and then outed when the attacker, pretending to represent the school, had called Reverend Marshall, claiming that Jared was the aggressor in the rape. During his father’s interrogation Jared had denied blame, but did admit that he was attracted to boys. The minister calls two of his church leaders to meet with them, and all, Jared included, agree that the boy should be enrolled in a conversion therapy center. This despite the fact that when Jared is examined by family physician Dr. Muldoon (Cherry Jones), she finds that he is a normal teenage boy. (Loved seeing Broadway actress Ms. Jones because of some personal contact with her—see my blog about a delightful evening spent with her.) During this time Jared’s mother Nancy (Nicole Kidman) is an onlooker, having long accepted the role of dutiful minister’s wife.

Nancy travels with Jared to “Love in Action,” planning to stay at a motel while Jared attends therapy sessions. During the day he participates in classes, while spending the nights in the motel with his mother. As the days pass Jared learns from other youth that this is a sorting out period, at the end of which it will be determined as to what further treatment the participants will need. The one fate to be avoided is not to be sent to the houses at the back of the camp where the permanent residents live in prison-like conditions.

Victor Sykes (Joel Edgerton himself) is the gay conversion therapist at the ironically named “Love in Action.” Telling the group (which include a few adults as well as youth), “our task is to bring you back to God,” he takes out a dollar bill and crumples it up, and then tears it. It is still, he says, a dollar bill, even though it has been damaged, even as they have been damaged by their sin. He tells them to imagine that they are Job, and that God and the Devil are warring over them. Sykes introduces a second staff member, who has the demeanor of a drill sergeant. In macho terms he describes what “a real man” is.

Interspersed with flashbacks to Jared’s past in high school and college, the scenes of the so-called therapy sessions prove to be spiritual and mental bullying. Some “love in action!” Jared is given, amid much psychobabble, a chart on which he is to name his family members and friends who have (supposedly) led him to choose homosexuality. Thus, unknown to the parents of the participants, they are being encouraged to blame one or more of their parents or other close persons for their predicament. You might recall that a few decades ago, before the American Psychiatric Association removed homosexuality from its lists of mental illnesses, the theory was prevalent that a parent, especially a mother, might have raised a son in a too effeminate manner.

Jared tries to cooperate at first, as do most of his companions. One, however, who can be seen holding back is Gary (Troye Sivan). Almost whispering, Gary tells Jared, “Play the part.” But, as Sykes becomes more brutal in his treatment, Jared cannot keep silent. He questions what is happening, sharing his concerns with his mother. He calls home, but his father’s answer always is to stay put. Matters come to a head with the treatment of the hulky but meek Cameron (Britton Sear), whom Sykes has and singled out disdainfully in several group sessions. Placing a coffin and candles in the darkened room, Sykes, with the other patients and Cameron’s parents gathered around, announces that they will beat the demon out of the boy. He strikes the terrified Cameron several times with his Bible, and then invites the parents to do so with their Bibles. Even Cameron’s tearful little sister is drawn into the beating.

Cameron’s “exorcism” is difficult to watch, and equally suspenseful is the one in which the staff try to prevent Nancy from entering the facility while Sykes is trying to convince the fed-up Jared that he should stay for further treatment. Finally gaining access to her son, she skeptically ask Sykes what qualifications he has. Not expecting a satisfactory answer, she drives away. She pleads with Jared to forgive her for not saying or doing anything to help him before. As they head for home, he asks what about his dad, and she replies, a nw steel resolve in her voice, that she will handle him. There follow more intense scenes, some of which take place “Four years later.” I will leave it to you to discover these,

To its credit, the film does not demonize Rev. Marshall, but shows him as a loving father who believes he is acting in the best interest of his son—better that Jared endure the pain of aversion therapy than go to Hell for his homosexual sins. (The thought occurred to me that this seemed like a throwback to the Middle Ages when the torturing inquisitors inflicted “temporary pain” on heretics in order to save their ”immortal souls.”)

This is a gripping film, my only criticism being that the script leaves out an important factor that might have helped some audience members understand its issues better. During the heated exchanges between father and son, the minister merely says it is his faith which teaches that homosexuality is a sin. No mention is made of the Bible, that in just a few places supports this view. Unchurched viewers might be led to believe that all Christians believe this, the film never suggesting that a great many Christians no longer accept those passages as authoritative, just as they also no longer regard certain other as authoritative–passages that support slavery, male domination of women, or pre-scientific views of astronomy and biology. Such Scripture passages reflect  the outmoded beliefs of the ancient world. *

Despite the above shortcoming, this is a good film for discussing a major problem—the film points out just before the end credits that it is still legal in 36 out of 50 US states to send children to conversion camps, despite the possibility that the often undertrained “therapists” can inflict psychological damage on its young inmates—as happens in the film.

The famous “hero’s journey” is made by Nancy as well as Jared. Hers has been a double yoke, bondage to the patriarchalism of her husband and men of the church as well as to the ignorance of the nature of homosexuality and a distortion of the nature of God and the Bible, Jared’s journey has been to the point of accepting himself as he is.

Sykes’ claim that God will accept Jared only if he changes is exposed as a lie. Indeed, in light of the terrible things he does to his vulnerable young charges at Camp Love in Action, it is a “monstrous lie,” one reminding me of the charge that Job cried out to his so-called friends who were convinced that his terrible suffering was God’s punishment for his secret sins, “Will you speak falsely for God and speak deceitfully for him?” (Job 13:7) Fortunately, Rev. Marshall’ Eamon’s love for his son is strong enough, if not to fully embrace Jared “as he is,” is at least strong enough not to banish him from his life. Because homosexuality now has a familiar face, he will not go the way of the pastor of the Westboro Baptist Church and their ilk who wave signs declaring “God Hates Homosexuals.”  Like Sykes at L.I.A., such hate-spewing folk might believe in God, but this is not the God of the writer who declared “God is love.”

* For a concise book that explodes the Fundamentalist myths, see Jack Rogers Jesus, the Bible and Homosexuality

A teenage homosexual undergoing through conversion therapy must fight attempts to make him hate himself & win God's love by changing his nature.
Editor Rating ★★★★★4.5 out of 5
More Details