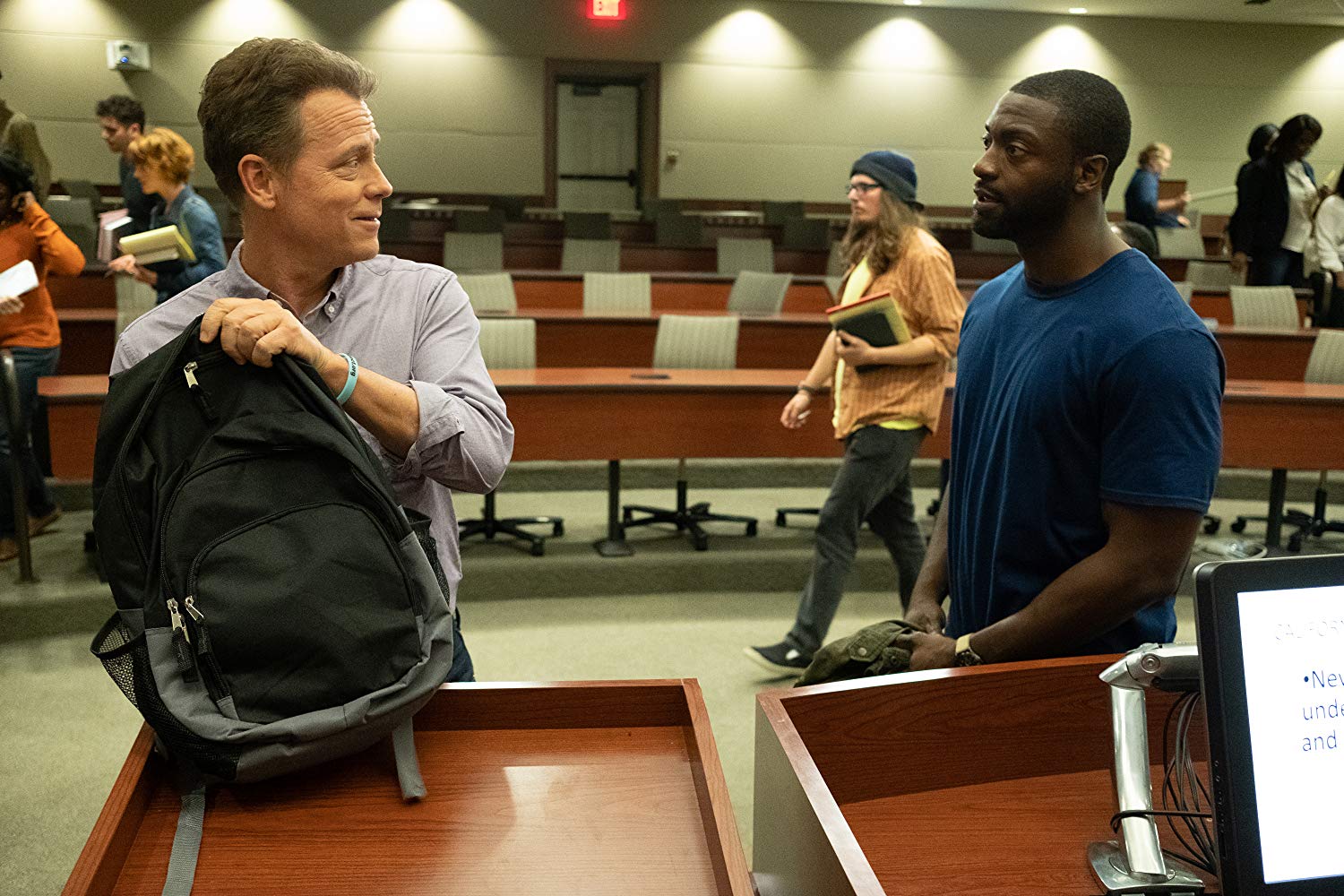 To impose a fine on the innocent is not right, or to flog the noble for their integrity.


Tell the innocent how fortunate they are, for they shall eat the fruit of their labors.

Virtually every critic has commented that director Tom Shadyac’s social justice film has been released at an awkward time, now that female rape victims at last are winning the right to be taken seriously by law enforcement agents and the media after so many years of neglect. Known primarily for turning out such comedies as Liar Liar, The Nutty Professor and Bruce Almighty,  Shadyac’s new film is a drama about a college-bound African American athlete falsely accused of rape by a female student. Members of the #MeToo movement could easily regard this film as the Old Guard’s attempt to put down their movement, but this would be the wrong conclusion. Instead it should be regarded as a cautionary film.

The titular hero, played by Aldis Hodge, has a bright future ahead. A star football player in Long Beach Polytechnic High with a promised scholarship from USC and prospects of a career in the NFL, he loses it all after classmate Kennisha Rice (Xosha Roquemore) invites him to make out in a lower hallway. They walk past several open class rooms to reach it. Kissing for a brief time, he then breaks away, telling her he could get in trouble if they continue. Apparently upset, she writes a note to a classmate accusing him of forcibly conducting her to the spot and raping her. Her mother believes her and calls the police. (The real name of the accuser, Wanetta Gibson, was changed in the script.)

The teenager is arrested, charged and tried as an adult, and during the trial given ten minutes to make a plea deal. His lawyer advises him to give up his innocent plea and enter “No contest” in exchange for a sentence of just a few months, or face the possibility of a long term sentence when convicted by the all white jury. His mother Leomia (Sherri Shepherd) is not available, so the terrified boy, having no one to guide him, reluctantly accepts the advice of his lawyer.

To his consternation the judge sentences Brian to 5 years in prison and another 5 years of probation. He must wear an ankle monitor and register as a sex offender, meaning that he cannot venture anywhere close to a school of playground. In a sense his life is over, at least the life he had envisioned as a professional football player is. His insistence on his innocence means nothing. Meanwhile, during this time his accuser has won a million dollar + lawsuit against the school for not providing protection to female students.

Facing incredible hardships when he is released, Brian is strictly monitored by parole officer Mick Randolph (Dorian Missick), who calls him whenever he is venturing too close to a playground or school. Prospective employers turn him down, with only his mother offering him support. Then he meets personal trainer Karina (Melanie Liburd) and dates her. When he confesses his conviction, she in turn reveals that she is a survivor of a sexual assault. She accepts his claim of innocence, providing one more strand in his tenuous web of support. One other strand is his memory of his prison counselor played by an uncredited Morgan Freeman, Jerome Johnson whose mantra guides the young man, “All you can control in life is how you respond to life.”

Learning of the California Innocence Project, Brian talks with its director attorney Justin Brooks (Greg Kinnear). Brooks rebuffs him at first, but the young man persists. Fortunately for the desperate young man, one of Brooks’ female assistants has gone over the court records and sides with Banks, thus encouraging her boss to look into the case. Brooks is surprised that neither the defense lawyer nor any staff from the prosecutor’s office ever visited the school to verify the alleged victim’s claims that she had been forced to go with Brooks to the lower hall. Had they done so, they would have seen the falsity of her story, the couple having to pass by several opened door classrooms filled with students.

Despite this, Brooks tells Banks that there is but a slim chance that a court will overturn his conviction. It would take a miracle involving the girl in confessing her lie. How this miracle unfolds makes riveting drama, even though we know the outcome in advance.

The difficult subject of rape and false conviction is well handled, thanks to the introduction of Karina and her own experience of being victimized years before. Although hers is a sub story, the scene in which she describes to Banks her traumatic violation is perhaps the most powerful in the film. I don’t know whether she is based on a real person or not—I found no mention of her when I Googled “Brian Banks”—but her inclusion shows that the director and scriptwriter Doug Atchison are sensitive to complex issues, especially those raised by the #MeToo Movement. It has taken raped women so long to become taken seriously, and here comes a movie that could be interpreted as calling this into question—there is still a lot of rage out there caused by the vote on Judge Cavanaugh’s election to the Supreme Court and the long time ignoring of sexual abuse by movie mogul Harvey Weinstein.

The film should be seen, in association with Ava DuVernay’s excellent miniseries about the Central Park Five, When They See Us, as one more example of the failure of the white-biased legal system’s treatment of young black males. Some have compared Bank’s experience with that of the wealthy young white Brock Turner, an athlete at Stanford University,  accused of rape in 2016. Turner was caught in the act, and chased down by two witnesses. There were no witnesses to Banks’ alleged attack, no semen, and no investigation of his plea to check out the route of his supposed abduction (past open class rooms)—and yet he was sentenced to five years in prison and to registration as a sex offender, whereas Turner was sentenced just to six months in jail and three years of probation (though he did have to register as a sex offender). Ah, the advantage of being white (and wealthy) in our country.

Enhanced by the persuasive acting of Aldis Hodge and Greg Kinnear and supporting cast, this is a film that should be seen by every American concerned about racism and justice in our nation. Even while applauding the beneficial results of the #MeToo Movement, we need to be wary of the rights of the accused and give them a full hearing, especially of young black males. The scars left by the centuries-old stereotype of lustful  black males are still visible in our society.

Falsely accused of rape, Afro American Brian Banks is faced with a life-time of hardship when released from prison, so he pleads with a lawyer to appeal his conviction.
Editor Rating ★★★★★4.5 out of 5
More Details