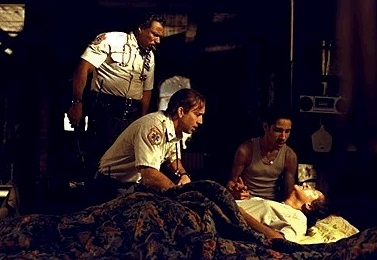 Critics have (rightly) referenced Bergman and Robert Bresson in their reviews of Paul Schrader’s new film First Reformed, so I want to bring to your attention an earlier film written by Schrader himself that also dealt with hope and despair, though perhaps not as deep a level.

How lonely sits the city that once was full of people!

How like a widow she has become, she that was great among the nations!

She weeps bitterly in the night, with tears on her cheeks;

among all her lovers she has no one to comfort her;

Look and see if there is any sorrow like my sorrow,

which was brought upon me,

which the Lord inflicted on the day of his fierce anger.

If ever there was a Hell approximating what Medieval artist Hieronymos Bosch painted, it was the night streets of pre-Giuliani New York depicted in Martin Scorcese’s new film. Although not as bad off as the destroyed Jerusalem of Jeremiah’s time, there are dark corners of the American city populated by cast-off people who are as traumatized as much as the author of Lamentations. It is the victims of New York’s mean streets that paramedic Frank Pierce (Nicolas Cage) and his partners must pick up, render emergency aid to, and try to transport them to the hospital before they die. Frank’s world is one in which homeless people sleep beneath almost every bridge and in every alley. Crack cocaine is taking its toll, not only the users dying of overdoses, but users, pushers, and innocent bystanders dying from gunshot wounds resulting from misunderstandings, robberies, and revenge shootings. Frank is almost burnt out, himself one of the walking wounded, a victim of dealing with too much mayhem and carnage. What keeps him going is the rush that comes when he and his partner of the night are able to save a life.

The film might make you think of Scorcese’s classic Taxi Driver, both dealing with the violence and human tragedies of the streets of New York, but Frank Pierce is a very different character from Travis Bickle. The latter is a loner whose inward rage turns him into a violent, avenging angel. Frank is looking for peace and companionship, the gentleness evident in his face once causing his mother to remark that he had the face of a priest. And, in a way, a priest he is, channeling grace to an assortment of desperate people terribly hurt by the brutal violence of the slums of the city.

Frank is attracted by the daughter of a man he picks up who is in cardiac arrest. Her name is Mary (Patricia Arquette), and he sees her several times over the next few days as she hovers around the hospital hoping that her father will live. They enter into several conversations, Frank escorting her home, and later accompanying her to an apartment called the Oasis, where a slick-talking proprietor dispenses drugs to his desperate clients looking for momentary respite from their sordid troubles. The exhausted Frank is tempted to take the proffered elixir of escape, but he resists, rousing himself to take Mary away from the den of living death. Several times Frank looks in on Mary’s father, whose imploring looks are calling for an end to the torture of using the shock instrument that brings him back from the peace of death. We, and we alone, can hear his plea to let him be. There are times when death is the only relief from suffering. (See James Weldon Johnson’s great poem/sermon “Go Down, Death.”)

Frank’s three ambulance partners deal with the squalor and death in different ways: Larry resorts to gallows humor and cynicism; Marcus (Ving Rhames) finds meaning in his faith in Jesus, albeit a very unorthodox faith; and Walls (Tom Sizemore) himself often resorts to violence to release his pent-up frustration.

There are many signs of grace in the film–a quick glimpse of a statue of the Virgin Mary; a powerful version of a Pieta at the end when Frank tells Mary her father’s fate; and frequent conversations about God and whether there is a divine plan to anything or not. In one memorable scene Frank describes to Mary how great he feels on the all too rare occasion when he saves someone’s life: “God has passed through you, why deny it…For one moment God was you.” Look at the cover of the DVD, and you might think that Frank exhibits more than “the face of a priest.” Might he be a Christ figure with a stethoscope?

Bringing Out the Dead was adapted from former paramedic Joe Connelly’s novel by long-time Scorcese collaborator Paul Schrader. Well known for his Calvinist background, Schrader and the Catholic Scorcese have provided us with films that explore the torment inherent in the human condition–Taxi Driver, Raging Bull, and The Last Temptation of Christ. In their current film they do find the grace that is also a part of the human condition. Bringing Out the Dead might not be for everyone, with its many scenes soaked in blood, violence and profane language, but for those able to take it, the film is as rewarding a dose of the harshness of reality as is likely to be found in a movie theater.

Reprinted (with a few changes) from the Dec. 1999 issue of Visual Parables.