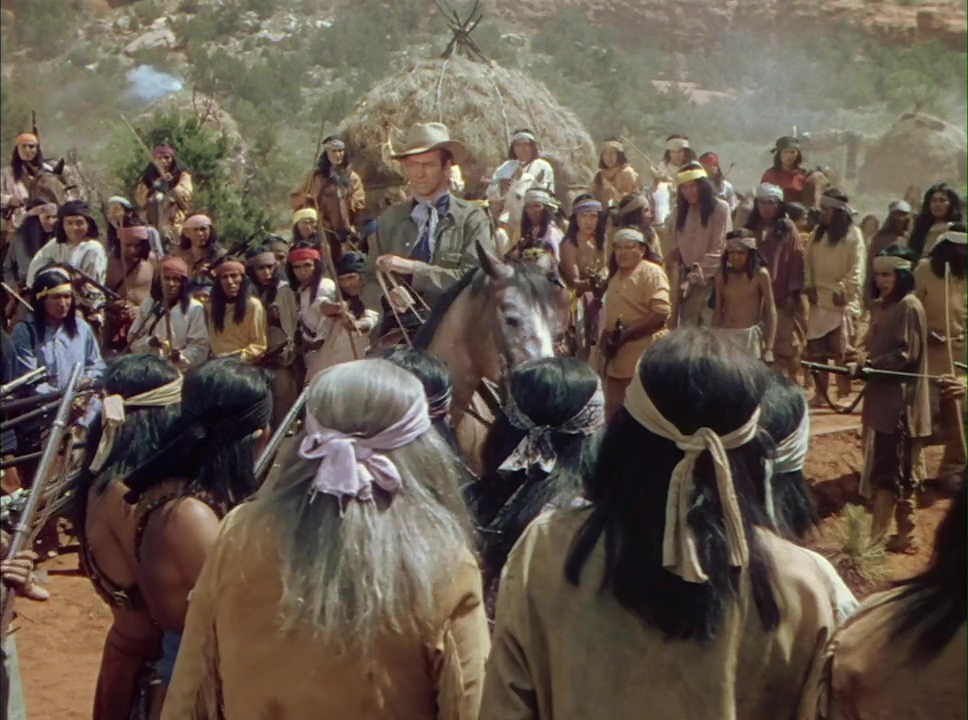 I watched this film for the 2nd time in almost 60 years because a member of our church’s movie group asked to see it. It proved to be too good to keep this for ourselves.

It seems appropriate that I write this review of an old Western on MLK Day. It was one of the first Hollywood  films to break with tradition by giving a positive view of Native Americans. The villains in this 1950 film were almost all white settlers prejudiced against all Indians, whereas the Apache chief Cochise joins former scout Tom Jeffords as a peacemaking hero. I was just entering high school when I saw this film and was high impressed, never having seen such a film before. My buddies and I were used to cheering when a cowboy or settler shot a faceless “savage” off his horse, we often repeating, “Another one bites the dust.”

Based on Elliott Arnold’s novel, Blood Brother, director Delmer Daves’ film starred two of my favorite stars of the times, James Stewart stars and Jeff Chandler. Stewart played Tom Jeffords, a veteran of the Union Army and former scout, he is now in charge of mail delivery in Arizona Territory. Only the mail isn’t being delivered, due to the long-time war upon whites led by Chiricahua Apache Chief Cochise, played by Chandler.

Narrated by Jeffords, the film opens with his coming upon a wounded Apache boy about to expire for lack of food and water. His hatred for Apaches losing to his compassion, Jeffords tends to the boy over a period of days. During this process he begins to see him as a human being and not an enemy. Back in Tuscon, he conceives the idea of going to Cochise and trying to persuade him to allow the mail to go through. He hires a local Native American named Juan to teach him the Apache language and customs. Others are skeptical, one person, Ben Slade (Will Geer), betting that he would fail. At the end of his sessions with Juan, Jeffords sets out to find Cochise and his village in themountains north of Tuscon.

Although at first received with great suspicion and barely concealed hostility, Cochise listens to Jeffords’ plea, eventually agreeing to a truce on a trial basis. The truce holds, though back in Tuscon many whites are not pleased, considering Tom an “Indian lover”—not at all a compliment. During the process Jeffords meets and falls in love with the beautiful Indian woman Sonseeahray (Debra Paget), whom he manages to secure permission to marry.

Closed minded individuals on both sides refuse to live in peace. Geronimo (Jay Silverheels—yes, the actor who played Tonto) breaks away from the tribe to lead a band of renegades determined to wipe out the white settlers. And in Tuscon Ben Slade determines to do the same to the Apaches, his gang bringing on the tragedy that, had it not been for Cochise, would have caused Jeffords to have abandoned his role as peacemaker.

The romance in the film is fictitious, but much of the plot is historical. I was pleased to see that Union General Oliver Howard was so well played by Basil Ruysdael. Known during the Civil War as “The Christian General” he went on to help found the famous Howard University and head up the Freedman’s Bureau, becoming a tireless champion for the freed slaves. General Grant dispatched Howard to broker peace with the Apaches. T he scene in which Jeffords meets Howard is a good one, as relevant today as it was in the 19th century, or 1950, or today:

Gen. Howard : The Bible I read preaches brotherhood for all of God’s children.

Gen. Oliver ‘The Christian General’ Howard : My Bible says nothing about the pigmentation of their skin.

In addition to advocating tolerance and peace, the film emphisizes the dignity of Cochise. He speaks in full sentences, and not the pigeon-English of Tonto in the Lone Ranger series. He provides wise counsel and comfort to Jeffords during the latter’s period of mourning—and yet can still act cruelly in a situation. When a disgruntled tribal member tries to kill Jeffords one night, Cochise confronts the renegade, executing him rather than exiling him because of his betrayal of hospitality.

On further note on this film : in 1950 racial prejudice was not the only poison in the air; it was also the time of the infamous witch hunt against Communists and liberals headed by the House Un-American Activities Committee and then of Senator Joseph McCarthy. Scriptwriter Albert Maltz was one of “the Hollywood Ten” who refused to cooperate with the HUAC, and thus was sent to prison and blacklisted. Fellow writer Michael Blankfort fronted for him in the screen credits. Thus in many ways this marvelous film, which holds up well today, is a testimony to tolerance, goodwill, and peace.

This review will be in the February  issue of VP along with a set of questions for reflection and/or discussion. If you have found reviews on this site helpful, please consider purchasing a subscription or individual issue in The Store.

A Western based on the true story of scout Tom Jeffords & Gen. Oliver Howard's pact with Apache Chief Cochise to stop fighting with settlers in Arizona.
Editor Rating ★★★★★5 out of 5
More Details