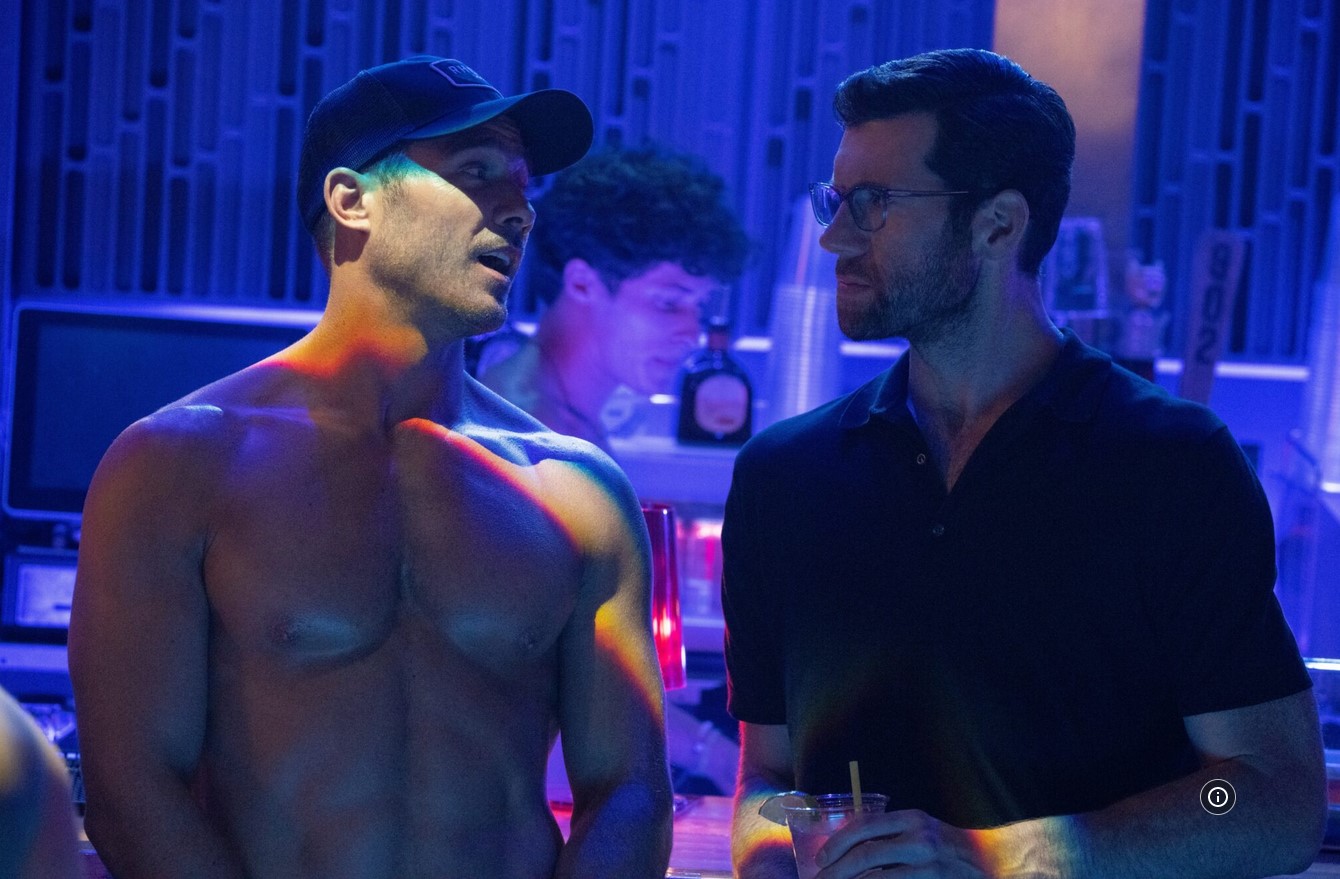 Two are better than one because they have a good reward for their toil. For if they fall, one will lift up the other, but woe to one who is alone and falls and does not have another to help.

Directed by Nicholas Stoller and written by Nicholas Stoller and Billy Eichner, Bros is the first gay romantic comedy from a major studio featuring an entirely LGBTQ principal cast to be released widely. Unfortunately it drew in less than half its production cost during its opening weekend, despite many glowing reviews. It really is as good as the critics claim, so I urge you to see it soon if you want to enjoy it on a big screen before it is dropped.

Billy Eichner plays the Jewish Bobby Leiber, a popular podcaster dealing with queer history. Living alone, he is against long lasting romantic entanglements. And then at a club he spies Aaron Shepard (Nicholas Stoller), a lawyer with a remarkably buffed body. Though thinking Shepherd shallow at first, Bobby soon enters into a series of on-off again romantic entanglements with the attractive dude.

Bobby is head of a group raising capital for New York’s first L.G.B.T.Q.+ museum. They have a building with work on the galleries proceeding well, but differing on Bobby’s proposal that one gallery be dedicated to Abraham Lincoln. He is obsessed with the idea that Lincoln was gay, even though his fellow board members point out the lack of evidence. The board is still short $5 million, so Bobby sets out to visit prospective donors, which will take him and Aaron to Provincetown..

The museum board is made of a delightful variety of queer people, including a butch lesbian, a belligerent bisexual, a Black trans woman, and a nonbinary person. Although none of them have enough screen time to emerge as rounded characters, the presence of such a wide spectrum of gays at least educates us straights to the fact that being gay, or queer, is not monolithic.

As a straight person I am sure that a lot of the gay humor passed over my head, but there is still so much that evoked my laughter, such as the running gag about our lovers watching “Hallheart Channel” movies and then realizing that Luke Macfarlane, who plays Aaron Shepard, starred in 14 Hallmark movies. Actor Bowen Yang is a hoot as wealthy museum benefactor Lawrence Grape whom our heroes call on in Provincetown during Gay Pride Week. Bobby flubs his appeal during their brief audience, but Aaron unexpectedly steps in, achieving a rapport with Grape when the latter suggests the museum include a carnival-like “gay trauma coaster.”

Just as the romance between the two men is at its height, a rupture occurs when Aaron and Bobby have dinner to meet the former’s family, and Aaron tells his friend not to be so gay. Bobby is hurt by this, and it appears their relationship is terminated, especially after he argues with Aaron’s mother..

There are some tender moments amidst the jokes and one-liners that add heart to the proceedings. At a beach Bobby shares his past history in high school and college when he was criticized for either being too gay or not gay enough. At the dedication of his museum Bobby stands up front with his board members and reminds the audience that not all of their friends had been able to survive to see this great day, a tender scene referring to the terrible period in the 80s when so many gays died, victims of AIDS, and our society and the federal government ignored the disease. You might want to look up the lyrics of the song “Love Is Not Love” that Bobby sings to his lover, because they sum up an argument he has made earlier that gay love is not the exact equivalent to heterosexual love.

The film is full of amusing cameos by Debra Messing, Ben Stiller, Jodie Foster, Amy Schumer, Guy Branum, Ts Madison, and others. The sex scenes, though not fully nude, will be too much for some, but for most of us, this is a film that can be very instructive, as well as hilariously funny. Bobby’s journey from self-centeredness to acceptance of others and a sense of solidarity with other outsiders is well depicted. The issue of when to teach children about sexual differences is also dealt with—it comes up when Aaron introduces Bobby to his parents at a dinner in a restaurant and the former becomes upset by Bobby’s insistence, based on his personal family experience, that grade school children are not too young to be introduced to the subject. Aaron’s mother Anne Shepard(Amanda Bearse) is a teacher and strongly disagrees. Still another factor I liked is the follow-your-dream theme—Aaron enjoys making chocolate delicacies but sees no future in it, whereas Bobby encourages him in his interest—perhaps another example of the Proverbs teaching that “Two are better than one.”

I hope this film eventually draws a larger audience than it is currently attracting! You can make that happen, and you should.

The on-off romance between 2 NYC gay men takes place while one of them strives to raise funds & open the first LBGTQIA museum.
Editor Rating ★★★★★4.5 out of 5
More Details