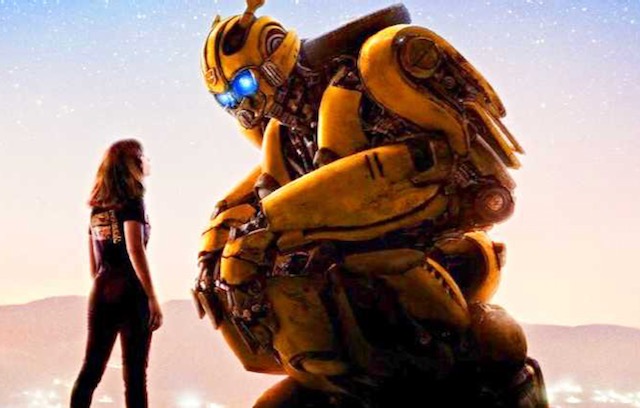 One who has unreliable friends soon comes to ruin,

but there is a friend who sticks closer than a brother.


My command is this:  Love each other as I have loved you.

Bumblebee is the opposite.  Well, it’s not low on action, but it is definitely high on story.  Bumblebee is a story about friendship.  I heard someone say that it was the Transformers version of E.T.

The movie begins on the Transformers’ home planet, Cybertron.  War is raging and the Autobots (the good guys) are about to lose.  (I loved this opening scene mostly because I saw so many familiar Transformers characters who looked just like they did when I was a kid!)  Knowing that the war is all but lost, Optimus Prime (Peter Cullen)—the leader of the Autobots—sends his lieutenant, B-127 (Dylan O’Brien), to Earth to set up a new base of operations where the Autobots can regroup.

When B-127 lands on Earth (the year is 1987), he is immediately attacked—first by American military led by Agent Burns (John Cena), then by Blitzwing (David Sobolov), the evil Decepticon who followed him from Cybertron.  Blitzwing destroys B-127’s voice synthesizer and leaves him for dead.  But just before he blacks out, B-127 scans a nearby VW Bug and transforms into that.

Eventually, a young girl named Charlie (Hailee Steinfeld) finds B-127 in a junkyard and takes him home, thinking she is getting nothing more than a fixer upper car.  But she gets a lot more than that!  When B-127 wakes up, both of them are terrified of the other.

But this is where their friendship begins.  I won’t lie to you.  The movie is fairly formulaic.  Because B-127 is unable to speak, he comes across as cute when he tries to communicate.  Eventually, Charlie names him Bumblebee because she says he sounds like bees when he tries to talk.

If only they could have an obstacle-free friendship.  But this is a movie and in the movies it’s never that easy.  The formula continues to play out.  The military, which knows about Bumblebee, is working hard to find and capture him.  Two more Decepticons have followed Bumblebee to Earth and have convinced the military that Bumblebee is a dangerous outlaw.

When Bumblebee is eventually captured, it is Charlie and her friend, Memo (Jorge Lendeberg, Jr.), who save him.  And when Charlie is about to be killed, it is Bumblebee who saves her.

In the end, they know they can’t remain together.  After a tearful good-bye, Bumblebee returns to the Autobots to continue the battle against the Decepticons.

Yes, it’s a formula.   But a formula well executed (the film was directed by Travis Knight, who also directed Kubo and the Two Strings).

Bumblebee is the story of the unlikely friendship between a human girl and an alien robot.  It is a story that tugs at our heart’s desire for friendship, for connection, and for love.  And it does a splendid job telling that story.

We welcome Markus back to VP.  Since his last review here Markus has started  a podcast  Spiritual Life and Leadership  on which he  interviews numerous leaders in the cutting edge of ministry.  He has promised us a review of Aquaman soon.

!n 1987 a teenaged girl discovers that the VW bug she bought at a junkyard is actually a transformer on the run named Bumble Bee.
Editor Rating ★★★★★5 out of 5
More Details