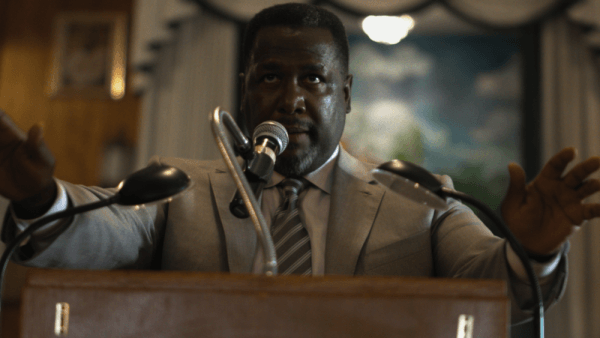 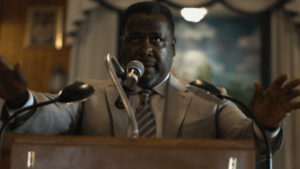 Writer-director Phillip Youmans’ feature film debut will test the patience of those who like action films because his film is more character-driven than plot propelled. His use of the hand-held camera adds to the sense of unease generated by a plot involving two men incapable of taking charge of their lives—though one of them, a pastor, seems to do so, but only in the pulpit. The film’s third protagonist is a woman of grace reaching out to help both men but rebuffed every time she tries. Set in rural Louisiana, the film explores alcoholism, spouse abuse, child neglect, faith and the African American church, and the failure of even love to save a lost soul.

Helen Wayne (Karen Kaia Livers) is the woman, whose narration at the beginning of the film goes on and on as she describes the myriad of remedies she has tried to cure her beloved dog JoJo of mange. She has tried folk remedies and prayer and hydrogen peroxide, vegetable oil and borax among many things. All to no avail. The one thing she refuses is the veterinarian because she knows he will tell her that the dog must be put down. During the long recital of her attempt to find a cure for her dog we see her going about her farm work, which includes killing, cleaning, and butchering a chicken.

Helen also is deeply concerned for her grown son Daniel, (Dominique McClellan) a jobless father who spends his days brooding and drinking at home with this young son Jeremiah (Braelyn Kelly). She has scolded and threatened him about getting another job, but to no effect. His anger and frustration are vented toward his wife Sherry (Emyri Crutchfield), whom he frequently abuses. His hours spent with Jeremiah while Sherry is at work are filled with abuse too in that he presses his liquor and beer upon the child.

Helen finds solace at church from the singing of the kinetic  choir and the spirited sermons of the pastor, Reverend Tillman (Wendell Pierce). But when she turns to him for help he offers mere platitudes, “You’re going to have to deal with this privately. Just you and God.” She is well aware of his own shortcomings. In one scene he preaches an excellent sermon on the dangers of materialism, but immediately afterwards he is drinking as he drives away in his car. At another time Helen tries to persuade him to let her drive him home because of his tipsiness, but he refuses. Shortly thereafter, responding to a police call about him, she comes to drive back to his house. Despite her pleas to him, she is no more able to help her minister than she is to help her son.

Along with their  alcoholism both hapless men are patriarchal abusers. Daniel’s beleaguered wife leaves him after his last beating of her. Tillman grieves for his dead wife, but he had abused her, as we see inn one brief flashback. The poor woman is down on her hands and knees mopping up her own blood.

What little Youmans shows us of the grandson Jeremiah makes us wonder about his future, especially with his father constantly plying the boy with alcohol. The boy wanders among the rows of sugar cane and plowed furrows, apparently with no friends to turn to. In a couple of scenes at home with his father, as the camera cuts away we are left worrying what the father might do. The boy has so retreated inward that he is almost mute, often merely staring when addressed.

The bleakness of everyone’s situation is unrelieved, except for a few brief scenes. Daniel, to the upbeat accompaniment of Robert Johnson’s 1937 song about hot tamales, “They’re Red Hot,” dances with Jeremiah around the room. However, the momentary feeling of lightness is quickly punctured by the knowledge that the adult has been making his son drink his alcohol with him. How can the lad possibly escape the father’s sad fate?

Some have seen Youmans ‘film as countering the too rosy a view usually offered by media of the Black church as the salvation of African Americans in their age-old struggle for survival amidst a white oppressive society. This film calls that view into question.

In the pulpit Reverend Tillman is a skillful preacher. In his sermon about the worship of Mammon, he quotes Malcolm Forbes’s tenet “He who dies with the most toys wins.” Countering this, Tillman warns his people, “No toys get you into heaven.” Well and good, but in his car alone, he sips at his hip flask while driving. In another scene he is so upset that he curses out loud within earshot of a number of parishioners. Thus they, and Helen, are aware of his hypocrisy but apparently are reluctant to call him on it. It may be that the filmmaker is agreeing with the author of the Petrine letter that judgment “begins with the household of God.”

The story is set in the rural South, but no whites are ever shown–with or without sheets and guns. The only reference to whites and their past oppression is the mention of the cops who pulled over the drunken minister and the phone call summoning Helen to come and take him home—the site of his pullover being “the old slave quarters” that have been preserved.

A lot has been made of Phillip Youmans’ youth—he was 17, a high school senior, when he shot the film—yes, he was his own cameraman as well as writer and director. Filmmaker Ava DuVernay is backing him, her distribution company Array bringing the film to the public’s attention. The only parallel I can think of is the marvelous John Singleton who was just 24 when he burst onto the film scene in 1991 with his perceptive take on Black urban life Boyz N the Hood.­ In light of Singleton’s later illustrious career, we can hope for a similar string of challenging work from the already skilled Youmans.

The film’s soundtrack is as skillfully put together as the rest of the film, with the use of the 1964 religious choral piece “Black Christ of the Andes” by the jazz composer and pianist Mary Lou Williams* especially intriguing during a night scene when Helen is driving. Ms. Williams composed the work in response to the Catholic Church’s canonization of a new saint in 1962, the Peruvian brother of the Dominican Order named Martin de Porres. He was the son of a freed slave named Ana Velazquez and a Spaniard who refused to accept him because he was born with the dark features of his mother. St. Martin de Porres was a renowned healer dedicated to helping the poor. Today Catholics striving for racial harmony consider him their patron saint. Like the saint, Helen seeks healing–for her dog and for the two men she knows best.

Sadly, like the father and son yearning to heal the alcoholic son/brother in A River Runs Through It, her ministrations thus far have been ineffective. Still, as we see by the abrupt ending, she cannot stand by and do nothing. What her final act is in the film you may well ponder long after turning away from the screen. It is interesting that the filmmaker never gives us a glimpse of he beloved dog, even though the first ten minutes of the film are about healing its mange before the poor creature scratches itself to death. Neither does he show us what she does at the climax when she walks out of the camera frame. Here is a filmmaker refusing to spoon feed his audience, preferring to follow the lead of my favorite Italian director who famously said that he wanted his audience to conclude the film in their own minds.

*For more information on the composer and her choral piece provided by NPR click here.

Black Helen lives in Louisiana where she has more than she can handle--heal her mangy dog, as well as her pastor & jobless son, both men addicted to alcohol, plus her grandson being abused.
Editor Rating ★★★★★4.5 out of 5
More Details