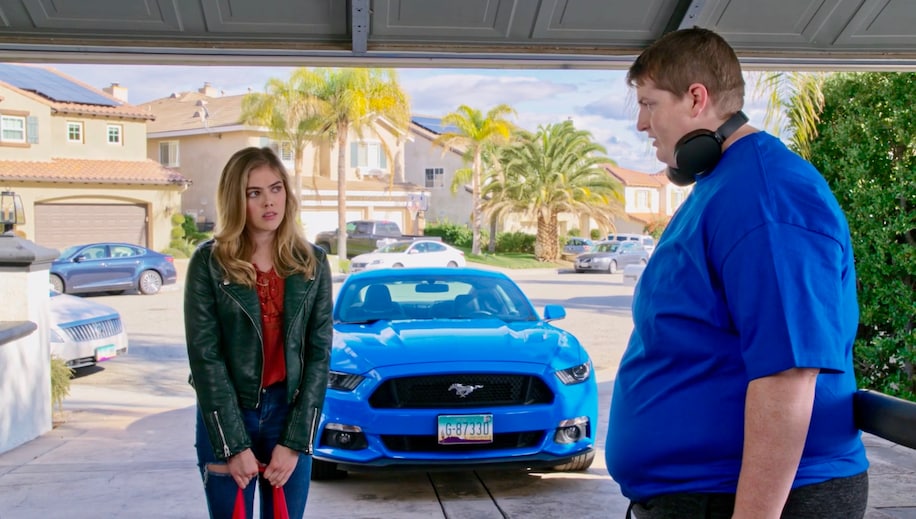 
Do not judge by appearances, but judge with right judgment.

Writer/director Paul A. Kaufman’s film, based on the book by Erin Jade Lange, should be shown to and discussed with teenagers. The reason being that virtually all teenagers have felt isolated and hopeless at times, if not by the obesity of the film’s Butter (Alex Kersting), then by some other difference that makes them feel judged and rejected by peers. And don’t let the low ratings of the metacritics keep you away, this dramedy being better than they allow, even if at times Kaufman preaches rather than shows.

Butter is known only by the debasing nickname given him by the bullies who drag him to the ground and force him to eat a whole stick of butter. We don’t learn his real name—Marshall– until later in the picture because his clueless mother Marian (Mira Sorvino) always calls him “Baby,” much to his dismay. And the neglect by his preoccupied father Frank (Brian Van Holt) almost amounts to parental abuse. The one person who could restore the persecuted boy’s self-esteem is the music teacher as Professor Dunn (Mykelti Williamson). Dunn, recognizing the boy’s great talent at playing the saxophone, but Marshall continues to reject his invitation to join his music class, and even his jazz band.

The boy finds solace blogging on the internet. There too he catfishes the classmate whom he has long adored, Anna (McKaley Miller), one of the most beautiful girls in their Arizona high school. Assuming the name JP, he pretends that he is an athlete, in their exchanges winning her admiration. She wants to meet. but he resists. This portion of the plot brings to mind another current film, Cyrano, in which a beautiful woman falls in love with a societal outsider solely through his words.

After a news broadcast in which an airline announces that it will double the price of a ticket for people who cannot fit into one seat must pay for two, Marshall’s inner pain becomes so great that he decides that suicide is the only solution. He announces on his blog that he will eat himself to death on New Years Eve. He will webcast live his last meal. The students react to this news of the classmate they consider their school’s greatest loser with mockery.

The boy’s mother does take him to see their family doctor (Ravi Patel) about his weight, but his bedside manner is so mawkish that he is of help at all. Meanwhile the students suggest foods for “Butter” to eat, and a few of them make overtures to him. He hangs out with several of them. Their pretense at friendship slowly turns to affection as they get better acquainted with him. And in several scenes of his playing some delightful jazz, we see what a loss to the world his death would be, were he to carry out his plan. The big night arrives, and virtually all his class mates, some of whom have made sure that his blog is not seen by any parent or teacher, are watching to see what happens. Most do not think he will really go through with his plan, and others are actually taking bets on the outcome.

It’s no spoiler to reveal that matters do not unfold as Marshall had intended, or that he, and we and the students, learn life-affirming lessons. Marshall also finds one more adult to add to those who understand and are able to help him, the hospital psychiatrist Doctor Jennice (Annabeth Gish), who affirms what virtually every would-be suicide needs to hear, that “life can, and will, get better.” If shown to and discussed with teens, the leader might ask which of Marshall’s so-called friends might they identify with with—and how complicit are the students with the bullies who enjoy humiliating the boy.

Though dealing with real, and such dark issues as bullying, obesity and suicide, the film turns out to be quite an upbeat film, one which a family with children would do well to watch together—and of course, anyone who works with teenagers and is concerned for their inner well-being. The ancient commandment, re-iterated by Jesus, to love the neighbor as oneself, recognizes that a proper self-love is necessary for both the individual and the community. I think Paul Kaufman and Erin Jade Lange recognize this too.

An obese teenager pining for a lovely girl decides to end being bullied by announcing he will commit suicide after eating live on the Internet on New Year's Eve.
Editor Rating ★★★★★4.5 out of 5
More Details