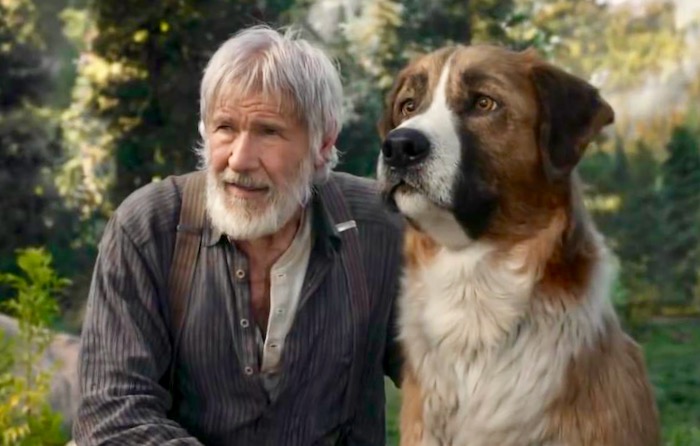 He has told you, O mortal, what is good; and what does the Lord require of you but to do justice, and to love kindness, and to walk humbly with your God?


Director Chris Sanders and scriptwriter Michael Green have transformed Jack London’s 1903 novel from a parable of Darwin’s “survival of the fittest” into one that teaches kindness as a way of life. Bolstered by a fine performance by a grizzled-cheeked Harrison Ford, who narrates the film as well as playing the last of sled dog Buck’s masters, this would have been a fine film if it were not for the cartoonish villain that the adapter changes the novel’s Hal into. However, despite this flaw, it is well worth seeing, especially on a big screen.

At the beginning of the film, Buck’s California stay with his long suffering but kind master Judge Miller (Bradley Whitford) climaxes in the 140-pound St. Bernard-Scotch Collie mixed canine eating the cooked chicken and leaving the banquet table on which it had been placed a total wreck. A local thug “dognaps” Buck that night and sells him to a speculator who ships him to Alaska where he will fetch a high price as a sled dog. The 1890 gold rush has hit the territory, with thousand of prospectors needing dog teams to haul themselves and their goods to the gold fields. Aboard the ship Buck learns “law of the club” when he breaks out of his crate, and his captor recaptures him. As the narrator tells us, Buck is subdued, but his spirit is not broken.

In Alaska Buck comes across John Thornton (Harrison Ford) in the street where he sees the latter drop his harmonica in the snow, retrieves it, and returns it to the astonished owner. But it is a married couple, Perrault (Omar Sy) and Francoise (Cara Gee), French-Canadian mail dispatchers, who become his next owners. They treat him kindly. Very kindly, one might say, given how the untrained dog disrupts the team, causing the sled to crash several times. This too is played for humor, rather than the deadly danger that could have resulted. (In the novel Buck does go through a period of training.) The lead dog, a Siberian husky named Spitz, is especially upset by Buck, and when the latter’s performance improves and Buck even saves Francoise from a watery death, Spitz becomes jealous and overtly hostile. We know a showdown cannot be far off.

Much later Buck passes into the hands of a trio of newly arrived tenderfoots who know nothing about wilderness living and who refuse to listen to any advice. Hal (Dan Stevens), his sister Mercedes (Karen Gillan), and her husband Charles (Colin Woodell) want to take all their possessions with them as they hunt for gold—this includes even a record player with its huge horn. This overloads the sled so much that even if its runners were not frozen in place, the load would be impossible for the dogs to pull for long. They abuse the dogs, Buck in particular because he is the leader. John intervenes, thus, earning Hal’s enmity which later will lead to deadly consequences. In the meantime, John comes into possession of Buck.

Buck’s time with John is the warmest part of the film, John’s kindness leading to their bond of love. John has led a lonely life on the fringes of town where his unresolved grief over the death of his young son led him to give up his wife and move to the isolated north. He seems intent on drinking himself to death. He often takes out a photograph of the boy and thinks about what might have been. The filmmakers’ anthropomorphism is so great that they have Buck recognize John’s over dependence on his whiskey bottles. In amusing ways Buck refuses to be his enabler, knocking over a glass and refusing to return a bottle.

When Buck wins a bet for his master, the two set out to prospect for gold, and it is the mountains that Buck feels the call of the wild, symbolized by the specter of a large wolf that appears occasionally and gazes at him. When John sets up camp in an abandoned cabin Buck meets a real one, a white she wolf with whom he begins to form a bond, the dog roaming far and wide with her pack for many hours each day. Regaining his sense of wonder and love of nature, John approves of this. And then Hal, the only survivor of the trio after they had refused to heed the warnings about thin ice. Their overloaded sled had crashed through while they were crossing a river. In the novel, all three had perished, so Hal’s reappearance, with him bent on vengeance, leads to quite a different ending than the novel’s. (I wonder if political correctness was a factor in substituting Hal for a group of Indians in the novel’s conclusion.)

This version of the novel contains far less violence than its source. No dogs ripping and tearing each other apart near the beginning of the novel—though movie’s depiction of the fight to the death between Spitz and Buck might unsettle young children—and there is just one blow with a club shown. However, the depiction of the fate of Hal could also be troubling.

The best feature of the film is its emphasis upon kindness, something in direct opposition to the book’s harsh view of a Darwinian dog-eat-dog world (literal in the book). Buck is even shown taking pity on one of his teammates when Spitz abuses the dog and snatches away his food by dropping his own morsel before the surprised pooch. Kindness is shown to produce good effects in the mail delivery sequence, Buck rewarding his owners by running the route in record time. And in the section with John, the latter’s kindness results in a warm relationship beneficial to both their spirits.

The scenery is spectacular, and the overworked “awesome” is a fit response to the CGI created Buck and other animals. They allow the filmmakers to make the animals act and react in ways impossible with live animals—and they don’t have to worry about being accused by the SPCA of mistreating them. Although I enjoyed the scenery and creatures, I believe it is the gravity of Harrison Ford’s performance that best enhances what might have been just another adventure story. Mourning the loss of his young son and filled with guilt over the dissolution of his marriage, he is brought out of his self-defeating alcoholic isolation by Buck, his spirit restored and read to experience the beauty of nature once again. When he shows Buck a map and talks about how his son would have loved venturing forth to find out what is over the next mountain, it is a moving moment. The dog, in turn, is rejuvenated by Thornton’s kindness, even as Buck earlier had offered kindness to an abused sled dog. Thus, the film could be seen as a morality tale teaching that kindness begets kindness, something not to be found in the novel itself (at least as I remember it, it having been many years since I read it).

For all but the very young (preschool), this is a flawed but still worthwhile film for families to enjoy. Having just seen Bad Boys for Life and Birds of Prey, it came across as an even better film than it is.

Jack London's story of Buck, a sled dog owned by cruel and kind masters, unfolds in the Alaskan wilderness during the 1890s gold rush in Alaska.
Editor Rating ★★★★★4 out of 5
More Details