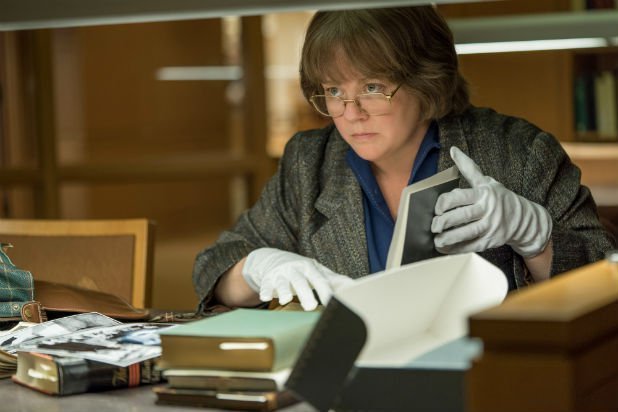 No one who practices deceit shall remain in my house; no one who utters lies shall continue in my presence.


Do not be deceived; God is not mocked, for you reap whatever you sow.

Lee Israel (Melissa McCarthy) is a 51-year-old lesbian who before 1991 made a good living writing articles and biographies of celebrities, such as Tallulah Bankhead and Dorothy Kilgallen. However, her book about Estée Lauder failed to sell, and now no one, her agent Marjorie (Jane Curtin) tells her, is interested in the book she wants to write about Fanny Brice. Her landlord is after her for her long over-due rent, and the Animal Hospital refuses to treat her ill cat until she pays her  bill.

Lee is largely to blame for her situation, Marjorie lectures her. She refuses to do book signings, dresses sloppily, insults people at parties. Lee is partially aware of this when she replies, “I’m a 51-year-old who likes cats better than people.” She attends Marjorie’s writers’ party but does not mingle. She is disgusted to overhear author Tom Clancy, declaring to a circle of admirers, “’Writer’s block’ is a term invented by the writing community to justify their laziness. My success is nothing more than that I have the dedication and stamina to sit and get the work done.” Later, when she learns that he has just signed a contract worth over 3 million dollars, she explodes in anger because she has not been able to convince even her agent of the worthiness of her Fanny Brice project. She complains, “Oh, to be a white man who doesn’t even know he’s full of crap!”

Lee becomes so desperate that she takes the framed thank-you note that Katherine Hepburn, in her own handwriting had sent her, to a book dealer. The owner Anna (Dolly Wells) admires it, paying her enough cash to ease her financial problems a bit. Anna expresses her admiration for Lee’s earlier books. At a New York library while examining some first editions of Brice’s books Lee comes across an envelope stashed into the pages of one of the books. It is a typed note by Brice with her signature at the bottom. Looking around, she stuffs it into her purse, selling it also. Told that there is an eager market for such missives, and that she could get more money if there was something distinctive about the note, she begins to create her own, practicing carefully the forgery of the signature, beginning with Noel Coward. Her forgery of a Dorothy Parker missive includes the phrase that gives the film its name.

Along the way the ever-drinking Lee is accosted at Julius, the famous gay bar in the East Village, by Englishman Jack Hock (Richard E. Grant) who stirs her memory that they had met years ago at a party distinguished by his going into a closet and peeing on a number of expensive fur coats. Jack is the opposite of Lee, glib and gregarious, always reaching out. He also is gay, always broke and living in a never disclosed location on the streets. They strike up a friendship, and when some of the dealers become suspicious because the FBI is starting to ask questions about her forged manuscripts, he becomes her partner in crime, easily charming the dealers into purchasing her fake letters. Before she is caught and hauled into court, she manages to forge some 400 letters. She also discovers her partner is a scammer.

Lee Israel is not a likeable person, and yet thanks to director Marielle Heller, screenwriters Nicole Holofcener and Jeff Whitty, and above all, to Melissa McCarthy’s considerable dramatic skills, we come to care for this outsider. Not, like, but to care for this woman who has struggled in a man’s world to earn a living as a writer. She is too blind to her faults to see that her loneliness is caused by her antisocial actions, although when she meets with her former lover Elaine (Anna Deavere Smith), who disabuses her of their supposed past happiness together, she hopefully gains a truer perspective of herself. Her statement to the judge at her sentencing combines confession with what seems like a more realistic assessment of herself.

Had she possessed a trace of religion, Lee might have benefitted from the warning of the apostle Paul to the Galatian Christians. However, given her lack of scruples, had she known him, she probably would have tried to practice writing in Greek, so she could forge his letter. She did go on to write her memoir, but a New York Post writer states that she “came to consider them (her forgeries) her greatest accomplishment.” What a life! To read in Wikipedia, “Israel is best remembered for her criminal enterprises.” Given what the Hebrew Scriptures say about deceit and lying, does anyone else see the irony of Lee’s last name.