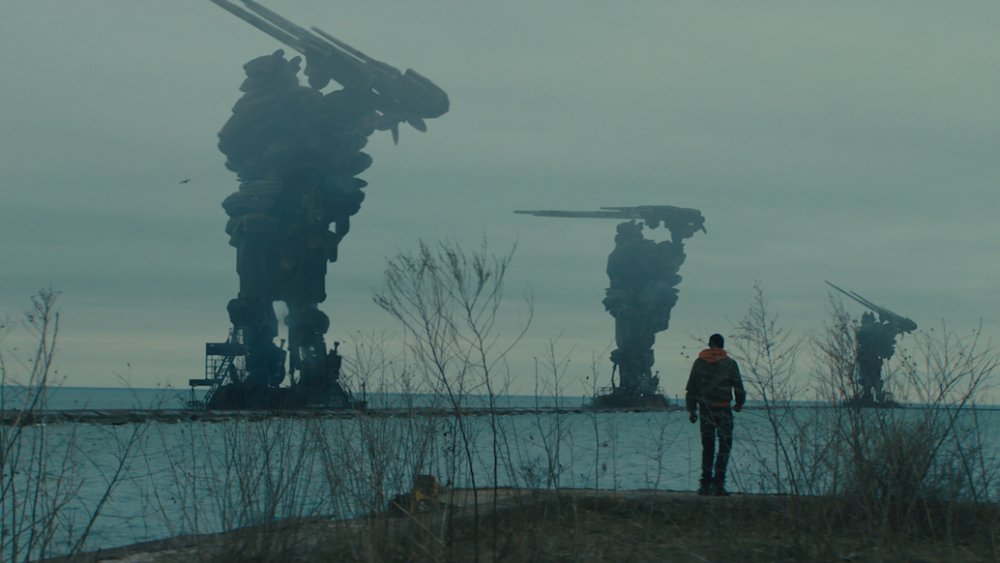 Director Rupert Wyatt and co-writer (Erica Beeney) set their story in Chicago nine years after aliens have conquered Earth. Calling themselves “legislators,” they seldom make an appearance, preferring to rule through human agents who are willing to do their bidding for substantual rewards. The downtown Loop is closed off, the aliens living underground. Only high-level government agents are allowed brief access to confer with the rulers.  For most people times are better with full employment and no economic downturns, even enough their work is virtually slave labor. The Chicago mayor declares in a speech that there has been an “American renaissance” in which the economy is great and crime at an all-time low. If this doesn’t make you think that this is meant to be intentionally relevant, then just picture the crowd wearing red caps with a certain slogan printed on them.

Among the humans doing well by the aliens is Police Commander William Mulligan (John Goodman), whose beat is an inner-city neighborhood reportedly populated by insurgents. He is a frequent visitor to the lady of the night known only as Jane Doe (Vera Farmig). One of her lines, “Beware of Greeks bringing gifts,” and a wall painting offer clues about an upcoming plot twist.

On the other side is young Gabriel Drummond (Ashton Sanders), whose parents were killed by the aliens nine years earlier while he and his brother Rafe were in the back seat of their car. Rafe (Jonathan Majors) now is reportedly dead, killed while leading a group of resistors. The younger Gabriel ekes out an existence working in a sweatshop factory wiping out data from confiscated digital devices that have been outlawed. (Even the cops are using polaroid rather than digital cameras.) Because of his relationship to his older brother he is kept under watch by Mulligan, who had known the parents. When Gabriel is dispatched to deliver a cigarette, he discovers that the recipient is his brother, planning an attack on a massive rally in Soldiers Field where a contingent of alien leaders will be present. Hidden in the cigarette is an access code that will give the rebels entrance in the high security area of the Field.

There is a lot of suspenseful action and a plot twist revealing who are the “Greeks bearing gifts” and the nature of the Trojan horse. The plot and whisperings of some of the characters was very murky for me. I suspect that this is the kind of film that can be appreciated only after the 2nd or 3rd viewing. As a thinly veiled sci-fi protest current right-wing politicians in America and Europe, the film might appeal to current resistors. Let others beware. The ultimate outcome suggests that resistors must be both persistent and as clever as those ancient Greeks camped outside the impregnable walls of Troy. Though it could have been made much clearer, this is a film worth your time.

2 brother engage in a revolt to regain Chicago from the rule of aliens who live underground and rule through collaborators.
Editor Rating ★★★★★4 out of 5
More Details