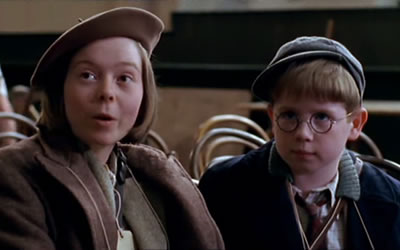 
You are the light of the world. A city built on a hill cannot be hid. No one after lighting a lamp puts it under the bushel basket, but on the lampstand, and it gives light to all in the house. In the same way, let your light shine before others, so that they may see your good works and give glory to your Father in heaven.

British director Coky Giedroyc and writer Nina Bawden have crafted a delightful Masterpiece Theater film from Michael Crompton‘s novel. From my perusing of imDB before this relatively short film, the BBC produced a 5-part miniseries of the novel. I would love to have seen this, because the people in it are very intriguing, especially the one who at first seems like a 20th Century reincarnation of Ebeneezer Scrooge. At first he seemed so harsh and sour that I expected him to burst out with a “Bah, humbug” during any number of scenes.

The story is set during the London Blitz when the decision was made to ship the children out into the country-side for their safety and their parents’ peace of mind. Carrie Willow (Keeley Fawcett) and her young brother Nick (Jack Stanley)are placed on board a train with lots of other children and evacuated to the safety of Wales. Like most of the children’s families, the Willows have no relatives there, so they are seated in rows of chairs while prospective foster parents walk around them, choosing whom to board according to their appearance. As Carrie fears because they are just average in looks, they are among the last to be picked.

Fortunately Louisa Evans (Lesley Sharp), aka “Aunty Lou,” picks them, even though they are not according to the specifications set by her stern brother Samuel Evans, henceforth known only as “Mr. Evans.” He is a very religious Methodist whose joyless religion Jesus would recognize as more akin to that of his enemies than the one he lived and taught. In laying down the law to the pair upon their arrival, he tells them that they are never to tread upon the ribbon of carpet that runs down the middle of the house’s stair: they must step only upon the wood on either side, thus requiring them to straddle the carpet in an awkward manner. This is indicative of his manner of relating to them and his store customers as well. He runs a kind of general store, and Carrie is promptly set to work as clerk, she being adept at making change. Aunty Lou tries her best to be a buffer between the children and the brother whom she both fears and thinks is too harsh.

Carrie and Nick soon make the acquaintance of the inhabitants of Druids Bottom where the jovial Hepzibah Green (Pauline Quirke) keeps house for Mr. Evan’s other sister Mrs Gotobed (Geraldine McEwan) and a severely handicapped cousin Mister Johnny (Jamie Beddard). These folk have also taken in an evacuee, slightly older than Carrie, Albert Sandwich (Eddie Cooper). The sister and brother immediately love Hepzibah, whose fanciful stories intrigues them. Unfortunately one of them will have sad consequences for Carrie later on.

Mrs. Gotobed’s ill health makes her reclusive at first, so it is not until later that Carrie meets her. They bond quickly, one of the film’s warmest scenes coming when the two dance together. Mrs. Gotobed and Mr. Evans have had a falling out, and so they have not spoken for years. Carrie also develops a close friendship with Albert, whom she sees at school where some students make fun of his last name.

Carrie will find herself in the middle of the Evans family hostility, confided in by Mrs. Gotobed, and asked to become a spy by Mr. Evans. Mrs. Gotobed, concerned for Johnny and Hezibah’s future after she is gone—apparently she has a premonition of death’s approach—asks Carrie, when she is dead, to let her brother know that when she provides in her will for the faithful housekeeper and Johnny to live in the house for their entire lives, she is not doing this to spite him.

We, and Carrie, come to see that Mr. Evans is not just a mean and nasty male harridan. He has a grown son serving in Africa, and when the son returns for a short furlough, we see that they are not in agreement as to his future. This and other concerns—one being Aunty Lou in an endearing sub-story– have turned him into the frosty old man propped up by a stern faith. At one point he is surprised at something Carrie says to him, and he remarks that she is being sympathetic. There is no melting away and warm hugging between him and Carrie, but there is a growing respect. After Mrs. Gotobed does die and, no will being found among her papers, Mr. Evans determines to evict Hezibah and Johnny. The others think he must have found and destroyed the document. Only Carrie rises to his defense, certain that he would not do such a thing.

The story began with an older Carrie, now a widow with children of her own, as its narrator. When she mentions that she did a terrible thing which she regrets, we keep expecting the dark deed to unfold at any time. When it does, and calamity does result, the effect is greater than she could imagine. She and Albert had agreed to write each other after her return to London, but only upon a certain condition, one that inadvertently blocks their exchange even before it can begin.

How all this works out makes for satisfying viewing. Carrie, Nick, and Albert Sandwich are deeply affected by war, but not nearly as painfully as the children in Bombardment and Ivan’s Childhood.In their own smaller, safer world the separation from parents for a long, indeterminate time is painful enough. Just look at our own world where children resist going away the first time to a summer camp. But Carrie shows how resilient children can be, as well at times of evincing a wisdom beyond their age. Mr. Evans is a leader in his local church, but it is Carrie and not he, who lives out the teachings of the apostle Paul and Christ in the above passages.

If you are looking for good, solid family viewing, this is your film. All of the actors, young and old, live up to the high quality that viewers expect of a Masterpiece Theater film.

During the London Blitz a girl & her brother are sent to a Welsh town where the girl becomes involved in a family dispute & makes a mistake that affects her life.
Editor Rating ★★★★★4 out of 5
More Details