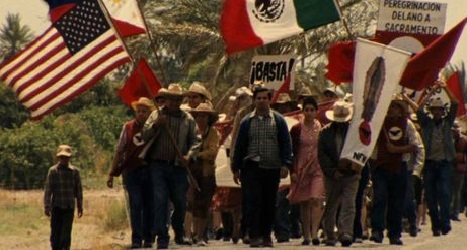 
“You have heard that it was said, ‘An eye for an eye and a tooth for a tooth.’ But I say to you, Do not resist an evildoer. But if anyone strikes you on the right cheek, turn the other also; and if anyone wants to sue you and take your coat, give your cloak as well; and if anyone forces you to go one mile, go also the second mile.

Director Diego Luna’s biography of the great labor and Civil Rights leader starts with César Chavez (Michael Pena) deciding in the early 1960s to go from his office job with the Community Service Organization in San Jose to work directly with the farm workers in the fields—“to get my hands dirty,” as he put it. Thus he and wife Helen (America Ferrera) pack their 8 children and meager possessions in and atop their car and head for Delano, located in the heart of the grape growing San Joaquin Valley. Helen is excited, but the children resent leaving their friends behind, nor are they pleased when they arrive and find that a far smaller house has been provided than promised.

As he works side by side with those picking grapes, César thinks of his own childhood slaving in the hot fields for meager wages. Then and now the growers and the overseers treat the workers as if they were children, allowing them no sense of dignity. (We should remember that the movie and advertising image of “Mexicans” in the Sixties was as sombrero wearing sleepyheads, described in Peggy Lee’s 1947 hit song “Mañana [Is Soon Enough For Me].)

After months of manual labor Chavez and fellow worker Dolores Huerta (Rosario Dawson) form the National Farm Workers Association. They at first cannot do much to improve the laborers’ work conditions, but they can help economically by setting up a credit union. Through small loans they help families in sudden need of funds, and thus the laborers begin to trust the two of them as leaders.

Sherriff Smith (Michael Cudlitz), “owned” by the powerful growers, can hardly believe that “Mexicans” could have set up such an institution. He also thinks the troublesome Chavez must be a Communist, but the latter scoffs, “Communists? We’re Catholic. How can Catholics be communists?”

Chavez manages to persuade his reluctant followers to join the Filipino Americans who have gone out on strike against the grape growers. They use picket lines, flyers, speeches, and marches to spread their cause—much of this in the face of intimidation, even violence. Chavez keeps emphasizing the need to stay nonviolent if they are to win. In 1966 he leads a large band of strikers on a walk of 250 miles to the state capitol at Sacramento to make their demands known—a sequence that reminded me of Dr. King’s Selma March or Gandhi’s Salt March to the Sea. They wear down one of the grape growers so that he signs a contract, achieving their first victory.

They will need even more perseverance and courage in their longer fight to win the right of what is to become the United Farm Workers’ Union to represent virtually all of the workers in the grape industry. To show what they are up against the film combines lots of characters, I am sure, in the fictional opponent known in the film simply as Bogdanovitch  (John Malkovich), who with his son nurtures a passionate hatred of this “Mexican” who dares to tell them what they must pay and how they must treat their workers. The film shows well the tedious pleading of the UFW organizers with the timid grape pickers, fearful of losing their jobs if they be seen talking with an organizer. Some union workers are beaten up, rammed by cars, arrested and jailed, and at least one shot.

Through it all Chavez tries to prevent his workers from returning the violence. He fires one man who strikes back, nearly launching a riot, and later, when his followers disagree, he announces that he will go on a hunger strike until everyone agrees to stand by nonviolence. He has learned well from the mentor he has never met, Mahatma Gandhi. Not shown in the movie is the lengthy telegram that Martin Luther King, Jr. sent to him, encouraging and offering his prayers and praising him as a great American leader.

During this period politicians are drawn into the grape conflict. Some of this is shown through archival footage, with Gov. Reagan siding with the growers—he even eats some grapes during a TV interview. Jack Holmes artfully portrays Sen. Robert Kennedy, who speaks eloquently on behalf of the grape pickers. Indeed, because of his influence the Sheriff tells the growers that he cannot overtly move against the UFW unless they actually break the law.

Although Helen Chavez at first mainly watches over the children, she shows her independence at times, even going against her husband’s wishes in risking arrest on a picket line. When César turns to Dolores to back him in forbidding her, she supports Helen instead. This scene reminds me of the wonderful rebellion of wives in another film about Hispanics striking for better wages and living conditions, the blacklisted 1954 Salt of the Earth.

Probably the heaviest burden for César to bear was the rift that developed between him and his oldest son Fernando (Eli Vargas), who justly felt neglected by a father who seemed to care more for others than himself. In this respect Chavez is much like the man whom he admired, Mohandas Gandhi whose resentful oldest son rebelled against his father when grown up. For a time Fernando refuses to talk with his father, even when the former is suffering during his hunger strike. I wish the film could have been as long as Gandhi to work in more of the details of the stressful family relationships.

What we are given is more of a high-lights of an incredibly rich life of service to others, of sacrificial service that carried a heavy cost. The two brief depictions of the workers sharing the Eucharist show that the source for Chavez’s passion for social justice was his deeply felt Catholic faith. Also seen during the demonstrations and marches are banners of Our Lady of Guadalupe, a symbol both religious and cultural for Mexicans and their American offspring. One sequence that a longer film might have shown was his friendship in San Jose with Father Donald McDonnell who introduced him to the writings of St. Francis and Mahatma Gandhi. Although he had had to drop out of school so that his mother could leave the fields, this lack of formal education did not hold him back, no more than the disappointments and failures that beset his movement at times. He once said, “It is possible to become discouraged about the injustice we see everywhere. But God did not promise us that the world would be humane and just. He gives us the gift of life and allows us to choose the way we will use our limited time on earth. It is an awesome opportunity.”*

In a sequence I did not know about, Chavez even feels forced to leave the country when the grape boycott, now supported by churches, unions, and families all around the country, is threatened by actions taken by President Nixon. A Californian, no doubt with many wealthy supporters among the grape growers, Nixon set out to break the strike by ordering the Defense Department to purchase the grapes the growers could not sell, and to send supplies of grapes to Great Britain and Europe, thus assuring markets for the growers. Chavez spoke out through TV/radio interviews and rallies in England, gaining sympathy and support for his people. In a scene that reminds one of the Boston Tea Party, Brits are shown dumping grapes into the Thames River. (This reminded me of the efforts of black and white Abolitionists just before and during the Civil War who rallied the common people in England to force their government to support the Union cause rather than the rebel slave-holder’s Confederacy.)

It has taken a long time for a film to be made about a great Hispanic American leader of the 20th century, perhaps demonstrating that Latinos are just now emerging as a power in our democracy. The film shows us a determined person dedicated to his/her faith, and the values that grow out of it—the worth and dignity of the individual, and love as the proper response to violence—can triumph over the entrenched powers that would hold back justice. I have been disappointed to see the lack of interest and support from the secular film critics. Please don’t let anything that you have read keep you from seeing this inspiring film! The film is well summed up by the observation that Chavez makes in the film:

A study guide is contained in the April 2014 issue of VP.

The true story of how Cesar Chavez organized grape pickers to form the UFW and how he triumphed over powerful enemies for better wages & conditions.
Editor Rating ★★★★★5 out of 5
More Details