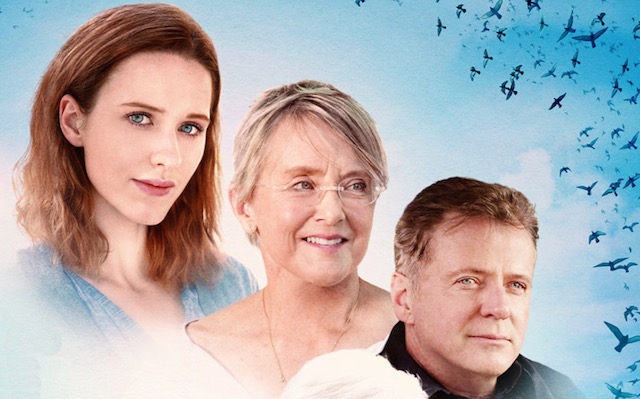 Even the sparrow finds a home, and the swallow a nest for herself, where she may lay her young, at thy altars, O Lord of hosts, my King and my God.


Are not five sparrows sold for two pennies? And not one of them is forgotten before God.  Why, even the hairs of your head are all numbered. Fear not; you are of more value than many sparrows.

Change is definitely in the air in this magic realism tale set in a small town liberal enough to allow African American music teacher Donna (Macy Gracy) to live in a large house next to accepting white owners. The film, however, centers on the reaction of neighbors Jo Ann Bayberry (Mary Beth Hurt) and husband Arnie (Peter Gerety) and next-door neighbor Margaret Lemke (Olympia Dukakis) to the arrival of the newcomer, lovely young Wren Miller (Rachel Brosnahan). The unattached woman has rented the second-floor apartment in Donna’s house.

Wren keeps to herself, a situation which, of course, is impossible to maintain for very long in such a small community. Jo Ann seems to be the town’s kind-hearted busy body, so when she spots Wren out walking, she joins her, saying, among other things, “Are you single? Let’s walk. I can tell you everything you need to know about this neighborhood…We older women don’t take to eccentricities. Unless they’re our own.”

A major part of Wren’s “eccentricities” that has people guessing is the huge amount of mail that postman Josh (Satya Bhabha) keeps dropping off at her upstairs door–so much that it is delivered in a bag marked “U.S. Mail.” Then, when she emerges later carrying that bag, what does she do with its contents? No one even knows where she goes with it. One ungrounded theory is that Wren must be corresponding with prisoners. She must have lived near—or maybe she was IN—a prison and got to know many of them. Wren is evasive and noncommittal in her answers to Jo Ann. Her mysteriousness also arouses the curiosity of local cop Moody (Aidan Quinn), who goes on line to investigate Wren’s background. What he discovers surprises him, sending him off to interrogate her, a confrontation that she tries to put off.

As the film unfolds we learn a little more of everyone’s background but Wren’s. This includes some of their past pain and anxiety. At the beginning of the film Margaret’s elderly husband Walter (M. Emmet Walsh) apparently attempts suicide because of his increasing dementia by walking from their yard into the path of an on-coming car. Only slightly injured, he spends his time sitting out front in a lawn chair observing all who pass by, including Wren on one of her daily walks clasping a mail bag to her body. He never says a word to anyone, including Margaret, until the film’s climactic moment—and then Margaret is so absorbed in playing a portable piano near him that she does not hear. This is too bad, because his positive words might have been a comfort during the following troubled days.

The cheery Jo Ann, apparently skilled in carpentry, is engaged in the morbid task of constructing her own coffin. She carries with her the guilt that one torrid day while a little granddaughter had been under her care, the child had climbed into a family car and died from heat prostration. The distraught mother has never forgiven her. We suspect that this inner grief is somehow tied to Wren, because when Jo Ann and Josh steal, open, and read some of the letters sent to Wren, they learn that they are written by people also beset by terrible problems and afflictions. There is a later collage of the letters over which we can hear the voices of the petitioners searching and pleading for help. This reminded me of a scene, suddenly turned dramatic, in the comedy Bruce Almighty. God gives the arrogant weatherman Bruce control of affairs around his native Buffalo, NY, and the human is overwhelmed when he is flooded with prayers from troubled people appealing for help. Their pain, so evident in their plaintive pleas for help, bring Bruce out of his self-centeredness, revealing how petty his own troubles are.

Change in the Air is Dianne Dreyer’s first film as director—she has a long string of credits as “script supervisor,’ many of them major films, stretching back to 1990—as well as scriptwriter Audra Gorman’s first screenplay. Their script becomes an allegory by depicting Jo Ann’s husband Arnie as an avid amateur ornithologist. His and Jo Ann’s home is decorated with bird prints, and he sits outside with his binoculars close at hand. He is excited when he spots a rare bird foreign to this country, but his fellow enthusiast is convinced that Arnie must be mistaken.

The lovely bird reappears; Arnie captures it with his digital camera; a reporter, the friend, and a crowd of fellow bird-lovers gather in his yard to celebrate. Important parts of the allegory are the name of the mysterious newcomer—Wren; Donna’s stirring rendition of the song “His Eye is On the Sparrow;” and the many shots of flocks of small birds fluttering across the sky, often in connection with a shot of Wren. Our puzzlement over her taking the letters and notes sent her and scrolling and tying them with string is cleared up in a climactic scene.

Everything comes together, though by no means “explained,” in the climax during which Jo Ann and Josh follow Wren to a park amid which stands a tall, castle-like tower, long abandoned. The camera cuts between the characters—Donna telling her youthful singers to sing from the heart, and then as they do so—the song is Terry Adams’ “Balance and Prayer”*—Wren observed by Jo Ann and Josh at the tower; Margaret tentatively playing the small electronic piano set up in their yard and Walt, seeing the bird land in front of him, causing him to utter the only words spoken by him in the entire film, followed by an incident from which those words remove the sting

This is a quiet little film with seemingly little happening—at least when compared to the rip-roaring blockbusters that appeal to thrill-seeking adolescent minds. This might be why some critics have been so hard on the film. However, don’t let their low opinions keep you from seeing this spiritual allegory. Some even ridicule the ornithological references, but I found the interweaving of this to be an intriguing use of Scriptures. The film is not overtly “Christian,” though one could almost make the case that Wren is, if not a Christ figure, then a savior figure. She is young, mysterious, and obviously very concerned about those whose missives she reads and then– well, what is it she does with them? Does her strange method of sending them out connect somehow with those flocks of birds we see so often?

The film is not overtly “Christian,” though one could almost make the case that Wren is, if not a Christ figure, then a savior figure. She is young, mysterious, and obviously very concerned about those whose missives she reads and then– well, what is it she does with them? Does her strange method of sending them out connect somehow with those flocks of birds we see so often?* What happens to her at the conclusion? Where does she go, and what will happen to those she left behind? There are plenty of questions to ponder, including the meaning of the title—what change is in the air? Who is changed in the film? Certainly, Walter goes undergoes the most change, but what about Jo Ann, Margaret, Josh, or Arnie?  Such questions are best raised in a group open to the possibility that there is more to life—and death—than can be seen or explained.  The group should listen to and ponder Mr. Cohen’s beautiful song that recognizes the darkness of the world and yet which insists (several times repeated), “There is a crack, a crack in everything/That’s how the light gets in.” It fits perfectly the mood and meaning of this gentle movie.

*Mr. Cohen’s song begins with the line, “The birds they sing, at the break of day/Start again, I heard them say,” a message all in the film need to hear.)  You can see and hear the author/composer on You Tube at https://www.youtube.com/watch?v=6wRYjtvIYK0.

To copy the words, go to https://www.azlyrics.com/lyrics/leonardcohen/anthem.html.

In a small town everyone is curious about a young newcomer named Wren & why she receives bags of mail & what change she might bring.
Editor Rating ★★★★★4.5 out of 5
More Details