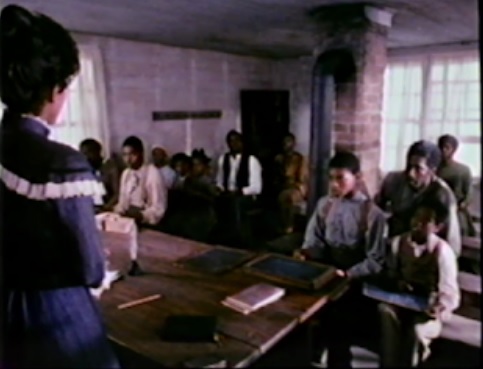 And you shall hallow the fiftieth year and you shall proclaim liberty throughout the land to all its inhabitants.


“…and you will know the truth, and the truth will make you free.”

Although virtually everyone knows of Harriett Tubman, especially since the release of the 2019 film Harriet, I suspect far fewer are familiar with Tubman’s contemporary, Black activist Charlotte Forten. She is the subject of director Bary Crane’s TV film Charlotte Forten’s Mission: Experiment in Freedom, though during the 19th century she was a well-known writer, educator, and speaker. Part of the PBS TV Series American Playhouse, this film, originally telecast on February 25, 1985, will make us aware of and appreciate a pioneer African American educator who sought to educate the slaves left behind when the whites of Port Royal and Helena Islands fled from the invading Union Army, as well as an interesting social project of the Civil War known as “The Port Royal Experiment.”.
The film begins with the well-off Charlotte Forten (Melba Moore) in Philadelphia in 1862 desiring to go with her friend Laura Towne (Carla Borelli) to teach the freed slaves. However, she is wracked by coughing and it is feared that she would not be able to endure the harsh climate of the South. She is strong-willed, eventually cajoling the board into sponsoring her. We also see her willfulness in her dispute with Abolitionist Edward Philbrick (Bruce McGill). With the practical mind of a Boston businessman he wants to organize the ex-slaves into a workforce that will tun the abandoned cotton plantations into profitable enterprises, the government being in great need of the cotton.

At Port Royal Charlotte rejoins her friend Laura who had already gone there and helped set up a school. Charlotte is reintroduced to an Abolitionist she had met during her sojourn in Boston, Col. Thomas Higginson (Vyto Ruginis). The former clergyman is now in charge of a group of Black soldiers—The Lincoln administration had recently agreed to recruit Blacks to the Army but insisted that their commanders be white officers. He is badly in need of more recruits, but the kindly Higginson refuses to force the ex-slaves into service. We also see that the Colonel is drawn to Charlotte by more than their shared passion for the freedom of Blacks.

Charlotte also encounters again, and clashes with Philbrick. He is upset that so many ex-slaves resist his offer to join his scheme to raise cotton. The newly freed slaves are more interested in raising crops that will feed their families—and just as important, they associate cotton raising with slavery, and thus want no part of it. Charlotte continually will accuse Philbrick of having ulterior motives, that he is more interested in profits than in the welfare of the former slaves. She enjoys a better relationship with the Reverend Mansfield French (Ned Beatty) and Edward Pierce (Jay Patterson), the latter who is in charge of the freedmen aid societies.

Charlotte herself is shown as having extreme difficulty in drawing any slaves or their children to her class. She wears the fine dresses she had brought with her—plus the women note her skin is lighter, her hair and her manner of speaking is like a white woman’s. Encouraged by Laura and Rev. French, she persists, eventually winning the trust of the teenaged Jacob (Roderick Wimberly), who becomes her sole pupil and shadow as she goes around the island trying to convince parents and children that they need an education in order to maintain their freedom. How she at last succeeds makes for heart-warming viewing. She was only at Port Royal for two years until the return of her illness forced her to return to Philadelphia, but her legacy was a core of Black citizens who, even after the return of the white plantation owners and failure of Reconstruction, remained a cohesive enclave.

Screenwriter Samm-Art Williams has based his screenplay on such source materials as Forten’s own articles “Life on the Sea Islands,” published in the May and June 1864 issues of the leading literary journal of the time, The Atlantic Monthly. Some of what he depicts is fictional, added for dramatic effect, especially the hint of a romance and the supposed difficulty Charlotte Forten had in recruiting students for he class. All of the major characters, except former slave Jacob, really lived, but Col. Higginson had long been married and thus is not likely to have proposed that the two of them become a couple. And in her Atlantic article, far from reporting on any difficulty, the educator writes:

“The first day at school was rather trying. Most of my children were very small, and consequently restless. Some were too young to learn the alphabet. These little ones were brought to school because the older children — in whose care their parents leave them while at work — could not come without them. We were therefore willing to have them come, although they seemed to have discovered the secret of perpetual motion and tried one’s patience sadly. But after some days of positive, though not severe treatment, order was brought out of chaos, and I found but little difficulty in managing and quieting the tiniest and most restless spirits. I never before saw children so eager to learn, although I had had several years’ experience in New England schools. Coming to school is a constant delight and recreation to them. They come here as other children go to play. The older ones, during the summer, work in the fields from early morning until eleven or twelve o’clock, and then come into school, after their hard toil in the hot sun, as bright and as anxious to learn as ever.”

I suspect the screenwriter took the stand-offish attitude of many of the ex-slaves had toward their teacher and exaggerated it to highlight her perseverance that made her such a strong leader of her times. It is true that her fine clothes and different hairstyles put off the former slaves, as did her refined speech (“she talks like a white person!). We see her responding to her critics by dressing in a simpler gown and entering homes and caring for a sick old grandmother.

What we are not shown is her friendship with  Robert Gould Shaw, the Commander of the all black 54th Massachusetts Regiment, the story of which is depicted so well in the movie Glory. She was present when the 54th attacked Fort Wagner and helped nurse the survivors of that disastrous battle. Neither did the film include many details of Charlotte’s wide experience at teaching and speaking, even though in her early twenties, before traveling to the Sea islands,  nor that the young activist knew Emerson, Senator Charles Sumner, William Lloyd Garrison, and many others active in the Abolitionist movement. Although she had to leave St. Helena Island because of illness, it did not prevent her from living a long life (until 1914) actively promoting the rights of Blacks and women and writing poetry and prose.

There are historical flaws and shortcomings in the film, but it still provides a good introduction to a Black woman who deserves to be remembered and honored.

At the present this film is available for free (though with ads) on Tubi, so click here to watch it.

For more on her life see the article Charlotte Forten Grimke .

This TV film focuses on the heroic 2 years that Black Abolitionist Charlotte Forten spent teaching ex-slaves at Port Royal during the Civil War.
Editor Rating ★★★★★4.5 out of 5
More Details