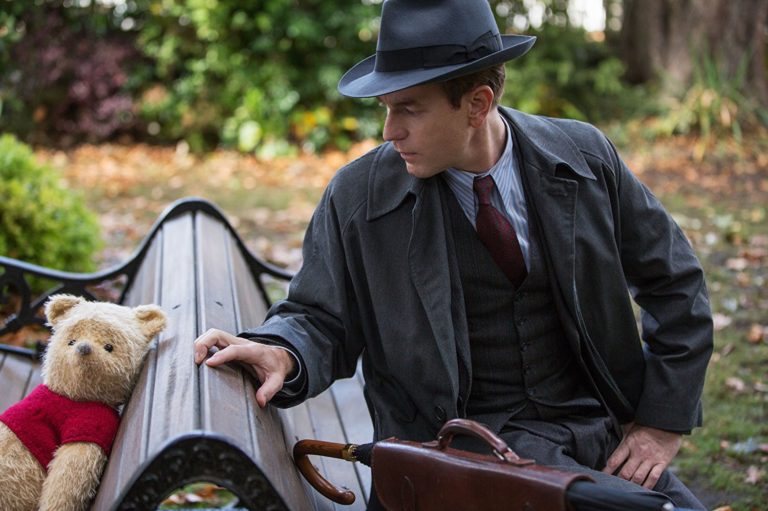 For everything there is a season, and a time for every matter under heaven… What gain have the workers from their toil?  I have seen the business that God has given to everyone to be busy with. He has made everything suitable for its time; moreover he has put a sense of past and future into their minds, yet they cannot find out what God has done from the beginning to the end. I know that there is nothing better for them than to be happy and enjoy themselves as long as they live…

The film begins with a prologue in which a going away party in the Hundred Acre Wood is being held for young Christopher Robin to say goodbye to his stuffed animal friends – Winnie the Pooh, Tigger, Piglet, Rabbit, Roo, Kanga, Eeyore and Owl.  A few of E.H. Shepard’s original drawings remind us of the original charm of the books. The boy promises that he will never forget his animal friends as he heads off for boarding school. Maybe so, but all too soon he is an adult, now living in London with his wife Evelyn (Hayley Atwell) and daughter Madeline (Bronte Carmichael), far too busy at work than he should be.
Indeed, in trying to please his superiors at the luggage manufacturing company, he scarcely has time for his family, telling them that he cannot get away to his old country home with them but must remain in town to solve a company crisis. It is while alone in the small park near his townhouse that by magic (which you will have to see in the movie) that Pooh appears to Christopher’s great surprise. Pooh cannot find his friends, so he has come to ask his friend to help him, as he did so many times in the past. The scenes of Christopher carrying the stuffed bear while trying to conceal his talking from passers-by is amusing, especially when they enter a telephone booth.

There follows Christopher’s returning Pooh to 100 Acre Wood while trying to sneak by his wife and daughter in the cottage and some adventures in the woods involving them all. Director Marc Forster and his talented team of scriptwriters perform a remarkable feat of retaining the charm of Milne’s characters, specially of Eeynor’s ever-gloomy observations and Tigger’s ever-present smile, as well as Pooh’s gentle nature.

Adults and children alike can enjoy this updated fable, with the former maybe led to questioning their overly-scheduled lives dominated by jobs that push their families into the background. Children will enjoy the value placed on friendship. This is truly an enchanting film, coming as a welcome relief for those of us who find the bloated summer superhero and adventure films too much of the same old violence and worship of physical power.

This review with a set of discussion questions is in the August 2018 issue of Visual Parables.

Pooh seeks out the grown Christopher Robin in London for help, & in turn helps his friend rediscover his family & creativity.
Editor Rating ★★★★★4 out of 5