To accompany our review of MANK, we go back a few years into the archives and bring forth this review of what everyone considers a masterpiece. Also, we’ll be posting a review of another film centering on CK, RKO-281.


If I have the gift of prophecy and can fathom all mysteries and all knowledge, and if I have a faith that can move mountains, but do not have love, I am nothing. Virtually everyone, even Charles Schultz’s Snoopy, rates Orson Welles’ first film as a masterpiece. The issuance of the classic in DVD form gives us a chance to see the film in all its pristine B&W clarity—and of course, there are those extras–in the 2-disc set you get the PBS documentary The Battle Over Citizen Kane.

Working with screenwriter Herman J. Mankiewicz and his own troupe of American Mercury Theater players, the “boy wonder” (Welles was just 26 and already had created a sensation on Broadway and over the airwaves) stormed into Hollywood and broke all the rules of movie making to create his masterwork. The story of the rise and fall of a newspaper magnate who resembled too much William Randolph Hearst, the film almost did not see the light of a projector, so vehemently did Hearst, in his many newspapers and behind the scenes maneuvers, attack the film in a vain attempt to squelch it. He might have saved himself all the effort, for despite all the attendant publicity, the film did poorly at the box office. It was too radical of a departure from the usual Hollywood fare for the public then to be able to understand it. The use of deep focus photography, unusual camera angles, the break-up of time as the reporter searches for the answer to the meaning of Kane’s life and last words, and the downer of an ending—all weighed more heavily in keeping the public away than Hearst’s campaign against it.

The story of Charles Foster Kane does resemble that of William Randolph Hearst in some ways, but as David Thomson argues in his fascinating book Rosebud: The Story of Orson Welles, the film is really autobiographical—or should we say, semi-autobiographical, as the director re- worked the script originally written by Mr. Mankiewicz. It is the story of a man, denied the love of parents during his most formative years, who spends the rest of his life seeking love and acclaim, or, when failing in this, their substitute, power. As author David Thomson shows, this was the story of the rest of Orson Welles’ life after Citizen Kane. Possessed of an ego the size of the Graf Zeppelin, Orson Welles, like Kane, became his own worst enemy, using everyone whom he met to further his own plans or to gratify his own ego. (Welles, who contributed much to the script during the filming, even tried to deny Mankiewicz screenwriting credit. Fortunately, the Academy Awards people gave the Oscar for Best Screenplay to both of them.) With the exception of The Magnificent Ambersons, his second film, Welles never again reached the heights of his first film—and even Ambersons was taken from his hands because of his arrogant way of dealing with the studio and costly delays. The film was released in a much shortened, bowdlerized version, falling far short of the work intended by its director, who was ever after persona non grata in Hollywood.

Citizen Kane begins like a creepy horror movie with a night shot of a large, castle-like mansion. to the accompaniment of Bernard Hermann’s expertly crafted music. As the camera takes us closer, we see on the iron fence a sign that says much about the inhabitant of the huge estate, “No Trespassing.” A house stands amidst falling snow, and then the camera pulls back to reveal a glass snow globe clutched in the hand of an old man. He is lying in his bed. With his dying breath the man slowly whispers “Rosebud,” his dead fingers releasing the globe so that it falls and smashes on the floor. A nurse comes in, checks the man’s heart, and covers his face with the bed sheet. Then, startlingly, follows a “March of Time” montage of scenes from the life of Charles Foster Kane,” a neat cinematic device that gives us the facts of the famous man.

Of course, the newsreel tells us little of the inner man, and it is this that the newsmen watching in the screening room want. The darkness of the room symbolizes their collective ignorance of Kane and his motives. Thompson, the reporter, is dispatched to interview all those who knew the magnate in order to try to unravel the meaning of “Rosebud.” In episode after episode we see Kane through the eyes of those who loved or worked with him—his ex-wife, his banker, newspaper staff. From their accounts a picture emerges of a potentially great but fatally flawed man who abandoned his youthful ideals in his search for love and power. The reporter never finds the answer as to the meaning of “Rosebud,” but Welles’ camera lets us in on the secret during the last scene when workers cast many of the now-worthless possessions of Kane into a furnace.

Of the many great scenes in the film, two of my favorites:

-A montage showing the disintegration of Kane’s first marriage because of his neglect of his wife during his obsession with his newspaper. In about two minutes the breakfast table sequence takes us through the years from the original closeness of the couple through their disagreements until at the end they are sitting at opposite ends of the long table, neither uttering a word but using newspapers as a barrier (she is reading a rival paper). 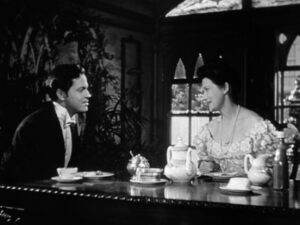 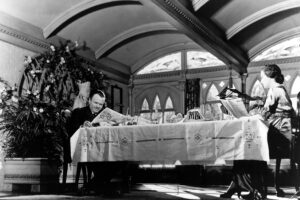 -At the conclusion of the film the camera takes us into the vast basement of Xanadu, Kane’s estate, where we see row after row of art treasures and antiques, stacked almost to the vaulted ceiling, which Kane has collected during his world travels. We can see that he acquired them out of a desire to own, not to display or enjoy them. As the camera travels around the vast, cavern-like room, it brings us to a large furnace where workmen are casting into the fire the once cherished but now useless possessions of the dead millionaire.

No film has better summed up the warning of a Galilean rabbi, “What does it profit a man, if he gains the whole world but loses his own soul?” Or the declaration made by the apostle Paul that without love a person “is nothing.”

Reprinted from the  Nov. 2001 issue of Visual Parables.

A fatally flawed man, unloved as a child & raised by a stranger, seeks recognition by editing a newspaper, love by marrying well, then power by an unsuccessful run for governor (failing because of the scandal of adultery) , his life ending alone in a huge mansion.
Editor Rating ★★★★★5 out of 5
More Details