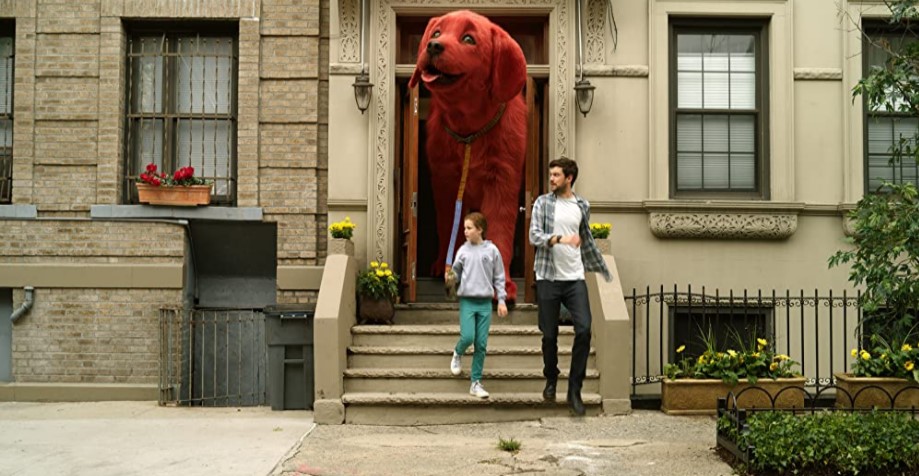 Based on beloved Scholastic book characters, this new adventure films will be enjoyed by families looking for nonviolent but exciting entertainment. Emily Elizabeth (Darby Camp) does not fit in well at her Manhattan middle school, so it is delightfully ironic that she becomes the owner of a dog that will face even greater difficulty fitting in.

The film begins with a hound dog and her litter of pups being gathered up animal rescuers and hauled away. One little red pup has been covered up and thus left behind. It somehow winds up in the custody of Mr. Bridwell (John Cleese), who has a circus-like traveling animal menagerie. Emily Elizabeth’s single mom Maggie (Sienna Guillory) has to be away for a few days on business in another part of the city, so she leaves her daughter in charge of her brother Casey (Jack Whitehall). He is a somewhat clueless ne-er do well, but a lot of fun for his niece. While in Central Park they explore Mr. Bridwell’s colorful tent filled with exotic animals. However, it is the red puppy that captures Emily Elizabeth’s heart. When Mr. Bridwell gives her the pup, she asks, “How big is he going to get?” He replies, “That depends, doesn’t it?” “On what?” ” On how much you love him.”

She must love him a lot, because overnight the dog magically grows as large as a horse, his head barely clearing the ceiling of her bedroom. Now Uncle Casey, who had wanted to return the pup right away, had told his niece that she could keep him just overnight. You can imagine his reaction when, despite the girl’s futile attempt to hid the big animal, he discovers how much the critter, whom she has named Clifford, has grown. And think of what a large hound could do to the furnishings of an apartment!

Outside, the reaction of many people to the big dog is fear. He is so BIG! Some of his antics are destructive, but they are not intentionally so. In one case the giant dog even saves a man from falling to his death. Soon the cops are out looking for the new menace to the Public. Also Tieran (Tony Hale), greedy head of a scientific company engaged in genetic experiments on animals, sees Clifford in a TV news report and decides he must acquire him for his laboratory. He concocts a story that his scientists had produced Clifford, and thus gains the support of the police in the hunt.

As in all enjoyable adventure films Emily Elizabeth is not alone in her defence of her pet. There is, of course, her bumbling uncle, but also neighbor boy Owen Yu (Izaac Wang), and at a crucial moment his father. They, like Emily Elizabeth have “made room” in their hearts for what to others is a scary beast. This is probably not destined to become a classic, but the film will provide plenty of wholesome excitement for a family with young children.

Wow, as I write this, little Rita, the dachshund pet of my visiting daughter and son-in-law, has just run into my office, her tail wagging as she jumps up on my leg to seek a little attention. (Paw pause while I stroke her little head. Thank goodness she is the opposite of Clifford in size!

This review will be in the Novemberissue of  VP along with a set of questions for reflection and/or discussion. If you have found reviews on this site helpful, please consider purchasing a subscription or individual issue in The Store.

A NYC girl receives a dog as a pet & with her uncle & best friend has to cope with consequences when it magically grows bigger than a horse.
Editor Rating ★★★★★3.5 out of 5
More Details